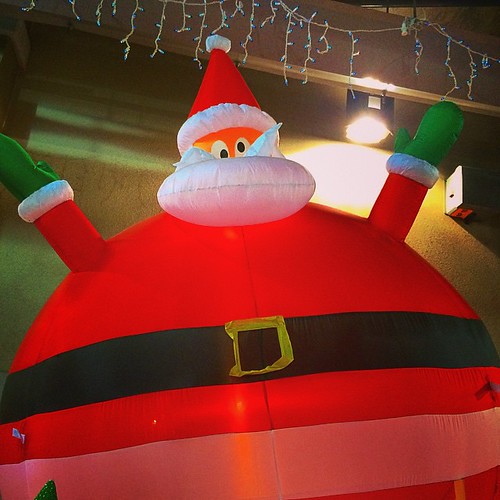 Bloated Santa is here for you! Image by Lynn Friedman on Flickr.

A selection of 10 links for you. Slippery when wet. I’m @charlesarthur on Twitter. Observations and links welcome.

The fact that bloatware was a notorious failure doesn’t mean that everyone’s been paying attention, of course. A company called Digital Turbine has a new service – called Ignite — for Android handsets that allows a carrier to install apps on customers’ smartphones “for more advertising revenue” whenever it wishes. In other words, carriers can now push garbage apps onto their users handsets to make a few bucks here and there whether the user wants it or not, and it seems as if the practice is perfectly legal.

Digital Turbine claims Verizon and T-Mobile as customers (among others), but that doesn’t necessarily mean that those carriers are currently using the service to push apps, but it does mean that they could if they wished. That said, some users have as recently as this week claimed that they were pushed updates called “DT_Ignite” for “performance enhancements”. The update apparently asks for permission to access almost any part of the phone’s system, making it not just annoying but also potentially dangerous.

So it’s not quite “without permission”, but it’s certainly “without transparency”. Users who noticed it find it annoying.

An Intel chip will replace a processor from Texas Instruments Inc. included in the first version of Glass, the people said.

Intel plans to promote Glass to companies such as hospital networks and manufacturers, while developing new workplace uses for the device, according to one of the people.

Google launched the Internet-connected eyewear in 2012 as a consumer gadget, but it was criticized by privacy advocates and widely regarded as nerdy. But Glass shows early signs of catching on as a workplace-computing device.

Through a program it calls Glass at Work, Google is working with software developers including Augmedix Inc. and APX Labs LLC to encourage use of Glass in industries such as health care, construction and manufacturing where employees work with their hands but need information.

Smart; no doubt Intel will subsidise it, as part of its desperate ongoing efforts to get into mobile. However Google still seems to think consumers will want Glass: 300 staff work on Glass, but only 5% (that’s 15) focus on “Glass at Work”.

One area Huawei is unlikely to return to, unless the market changes: Windows Phone.

Huawei produced two models running Microsoft’s smartphone OS before it said it was putting its plans for future Windows Phones on hold.

Huawei is also facing stiff competition in the smartphone market from Beijing-based Xiaomi, which in the third quarter of this year bypassed Huawei to become the world’s third biggest smartphone vendor, according to IDC.

Xiaomi, founded just four years ago, has ascended quickly due mainly to a strategy of offering high-end features for low prices, resulting in high-volume sales figures, especially in its home country.

Huawei says it isn’t looking to compete in the low-margin arena, and is instead concentrating on high-end phones.

“We will lose volume in that shift,” Kelly acknowledged.

Darius Lahoutifard is an entrepreneur with a withering critique of Schmidt and Jonathan Rosenberg’s new book “How Google Works”:

the authors are confusing causation and correlation. Schmidt points out a series of characteristics of Google as a company and presents them as the reasons for Google’s success, but in my opinion, they are all consequences of Google’s success.

For example the authors write: “Their plan for creating that great search engine, and all the other great services was equally simple: Hire as many talented software engineers as possible, and give them freedom.” Well, this worked because the search was already successful enough to fund that freedom. I would love to see one single company that isn’t dominating a market with no cash cow in-flow that can succeed without strict discipline, sharp focus, hard work, and hands-on management.

If this management style is the reason for Google’s success, then why have the majority of initiatives at Google either failed or been financially inefficient and unprofitable? If they were standalone startups, they would have most likely already been dead.

Another special characteristic of Google is its sales force. When interacting with sales people at Google, I am shocked to see how untrained and inefficient they are.

No punches pulled. At all. (Google was very, very focussed as a startup. The post-IPO moonshot stuff has been a bit hit-and-miss. Well, miss, apart from Android and Maps.)

Small Data: Is lots of vinyl being sold? >> BBC News

This year is the first time that more than a million vinyl albums have been sold [in the UK] since 1996. This was based on Official Charts data released by the British Phonographic Industry (BPI), going back to 1994, which was when they started keeping count.

There was nothing particularly wrong with the figures, except that 1994 is quite a bad year to start looking at vinyl, as the graph above shows.

Look at the graph, and you suddenly realise what a non-story this was.

“We expect the mobile business will get better under Shin’s leadership,” Lee Joon, head of communications at Samsung’s Future Strategy Office, told reporters in a briefing.
He explained its critical consumer electronics business affiliate had no option but to pursue “stability” rather than radical changes as Chairman Lee, who makes key decisions, was still recuperating.

“When the junior Lee takes over completely, then Samsung will see real changes in management,” said a senior executive at a components affiliate by telephone.

Samsung Electronics only promoted three presidents, the lowest number since 2008.

“This year, the performance of Samsung Electronics and other affiliates wasn’t that good,” Lee Joon said.

Is Uber’s rider database a sitting duck for hackers? >> The Washington Post

A person who had a job interview in Uber’s Washington office in 2013 said he got the kind of access enjoyed by actual employees for an entire day, even for several hours after the job interview ended. He happily crawled through the database looking up the records of people he knew – including a family member of a prominent politician – before the seemingly magical power disappeared.

“What an Uber employee would have is everything, complete,” said this person, who spoke on the condition of anonymity for fear of retribution from the company.

A more sophisticated – and malicious – person with that access could have scraped data on a massive scale, then used powerful analytical software to learn things that Uber users might want to keep private, for professional or personal reasons.

So for once, the headline doesn’t conform to Betteridge’s Law.

The paper-thin Lightpaper is made by mixing ink and tiny LEDs together and then printing the mixture out on a conductive layer. This layer is then sealed between two additional layers. The tiny diodes are about the size of a red blood cell. When a current runs through the paper, the tiny, randomly-dispersed diodes will light up.

Rohinni’s LightPaper is much thinner than current lighting technology OLED, which has been used in flat screen televisions and allowed TV screens thinner than tenth of an inch to be manufactured. But it seems that the company is more interested in using LightPaper in the automotive industry, as a new means for make excellent taillights, or branding.

Its application potential was endless, said Nick Smoot, chief marketing officer. He said they were thinking about printing lamp shades, so lamps would not need light bulbs. “Anywhere there is a light, this could replace that.” He also said that eventually people will be able to print their own at home. “You will be able to design and print you own light,” he said. “Right now we are printing the light, but we are going to be putting that back in the hands of the people.”

Another modular smartphone, like the Google Ara, but more limited: you can replace the battery, screen and OS. (It’s not clear what else.) Designed and built in Finland, and aims to start shipping in 2015.

The complaint focuses on Apple’s older iPod models, which only supported music purchased on iTunes and songs downloaded from CDs. Also being disputed is Apple’s FairPlay system of encoding purchased music, which limited music playback to the iPod and not competing MP3 players. In the suit, consumers claim Apple violated antitrust law by deliberately limiting interoperability with competitors, while exclusively promoting its products and services.

The email testimony is expected to paint Steve Jobs as an aggressive businessman who worked hard to ensure the success of the iPod and iTunes. This success often came at the expense of smaller competitors, which were not allowed to connect to Apple’s popular iPod ecosystem. In one already released email, Jobs addresses Apple’s lack of support for the-then upcoming MusicMatch music store.

“We need to make sure that when Music Match launches their download music store they cannot use iPod,” he wrote. “Is this going to be an issue?”

This relates to 2004 and 2005. Apple will argue that the purpose was to improve the platform for the consumer. (Side note: in January 2013 the US FTC decided that Google’s manipulation of search results to the disfavour of competitors was not an antitrust matter, because it benefited consumers.)