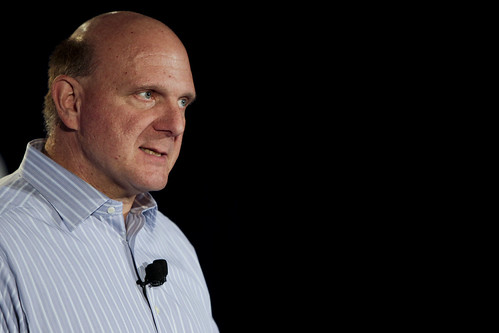 “Waddya mean, you lost my shareholder pass?” Photo by Wired Photostream on Flickr.

A selection of 10 links for you. We counted. I’m charlesarthur on Twitter. Observations and links welcome.

The future appears bleak for companies whose sole business is music streaming. An increasing number of investors and people in the record industry expect that digital music distribution will be dominated by a few large, cash-rich technology groups — in particular, Apple, Google and Amazon.

“When you have the likes of Apple fighting against you, it becomes very difficult to survive,” says Mark Tluszcz, chief executive of Mangrove, the venture capital firm and one of the original investors in Rdio. It sold its shares several years ago after concluding that no matter how many subscribers the streaming service managed to attract, it would never be able to turn a profit.

“As a streaming platform, your relative value is nil, because you don’t own the content,” he says. “This is not a good business to be in.”

The fundamental challenge for streaming services is that they are largely at the mercy of music copyright holders — including Sony Music Entertainment, Vivendi’s Universal Music Group, and Warner Music Group. These three record companies alone control about three-quarters of the $15bn-a-year global recorded music market.

To stand a chance of attracting a large number of subscribers, a streaming service must offer a broad catalogue of songs from all three major record companies.

Related: Coldplay keeping new album (released today, Friday!) off any streaming service offering a free tier. So won’t be on Spotify, but will be on Apple Music (presumably) and Tidal.
link to this extract

Why companies are switching from Google Apps to Office 365 » CIO

Mary Branscombe notes that Office 365 seems to have passed Google Docs on some measures:

The simplicity of Gmail and Google Docs clearly appeals to some users, but as one of the most widely used applications in the world, the Office software is familiar to many. “When you put these products into companies, the user interface really matters,” McKinnon says. “For email, the user interface really matters. Google Apps is dramatically different from Office and that’s pretty jarring for people who’ve been using Outlook for a long time. It’s like it beamed in from outer space; you have to use a browser, the way it does conversations and threading with labels versus folders, it’s pretty jarring.”

And it’s hard to use Outlook with Google, many customers report. “Some companies, they go to Google and they think they are going to make it work with Outlook; what they find out when they start using the calendar is that it just doesn’t work as well with the Google Apps backend as it does when you’re using Office 365. The user interface is so important that it pulls them back in. Even if you like the Google backend better, you have thousands of users saying ‘what happened to my folders?’”

That’s Swift, the language that Apple introduced in June 2014 – having kept it a complete secret – and said it would make open source by the end of this year. The above link goes to the discussion about it having done that. There’s also this page on the language’s forward evolution.

Sure that Andy Rubin will tweet about this really soon.
link to this extract

Ballmer said he has discussed the issue [of the non-disclosure of profit margins and total sales from cloud products] with the company and that after almost two years out of the CEO job, he can’t even guess what these numbers are.

“We enjoy a regular dialogue with Steve, and welcome his input and feedback, as we do from our other investors.” said Chris Suh, Microsoft’s general manager for investor relations.

Ballmer also criticized Nadella’s answer to an audience member questioning the lack of key apps, like one for Starbucks, on the company’s Windows Phone. Nadella responded by citing the company’s plan to appeal to Windows developers by allowing them to write universal applications that work on computers, phones and tablets, targeting a larger array of devices than just Microsoft’s handsets that have just a single-digit share of the mobile market.

“That won’t work,” Ballmer commented as Nadella spoke. Instead, the company needs to enable Windows Phones “to run Android apps,” he said.

Chris Suh’s comment is basically “sod off”. At this rate Ballmer is destined to become Microsoft’s Steve Wozniak (as portrayed in the film Steve Jobs, rather than as in real life).
link to this extract

“Revenue has been fine for quite a while,” he said. “Of course it is a better scenario when your audience is growing again in a sustainable way. Advertisers appreciate that.”

As the site increasingly began to focus on broader tech issues earlier this year, traffic has begun to tick back up. Unique visitors to the site in October were up 25% compared with same month last year at 10.8 million, according to comScore Inc. By comparison, rival CNET was slightly down in October year-over-year at 32.2 million. Traffic to the Verge jumped 27% in the same period to 19.8 million.

Overall, the tech media space has become very crowded in recent years, making it harder to stand out.

That “audience declined but advertising revenue stayed the same” suggests more ads being thrown at people, which could make them go away faster. Changing the editorial position seems to be the way to reverse that. But the “social impact” space could get crowded fast too.
link to this extract

Why are there no unicorns …. or are there? » Pulling on the corkscrew of life

Dr Mike Ward tried to puzzle out the answer to a question I posed on Twitter: since we have deer with bilateral horns, and rhino with central “horns” (you’ll see why the quotes are there), why don’t we have horses or deer with central horns, ie unicorns?

The ancestors of modern deer also had tusks. Later they evolved horns and their tusks withered away as their horns grew. I see no reason – in principle – why deer or antelope (or other ungulates) could not have evolved to grow (say) only their left horns and why that single horn could not (with a slight asymmetrical deformation in skull development) have moved over towards the centre of the head. Such a “unicorn” would not be quite symmetrical but, given that they have helical horns, unicorns aren’t really symmetrical either.

In fact, thinking about it, I don’t really see why – if the horn were composed of two fused halves (like the swordfish “bill”) – we couldn’t have had a “unicorn” with a single untwisted horn.

Evolutionary advantage in lacking a horn, or lack of it in having a horn, might have played a part. Or sheer dumb lack of happenstance? Your views welcome.
link to this extract

December 2010: mobile OS – what is in store for the future? » Nota Bene: Eugene Kaspersky’s Official Blog

In December 2010, Kaspersky (the antivirus guy) offered a bet:

And now for a bit of a global long-term forecasting.

What’s the story going to be with mobile operating systems in the future? In say around five years?

I’m ready to bet that – if the current manufacturers of mobile phones don’t change their strategies – the mobile OS market in the five years perspective will be split up as follows:

Called Traffic Jam Assist, the first system works alongside the car’s cruise control and uses cameras and radar to monitor road markings and surrounding traffic. When driving in stop-start traffic on a busy motorway, the feature can be switched on via the steering wheel; it then takes control of the steering, brakes and accelerator.

Shown off for the first time in Germany, the system will keep the car in the centre of your lane, a safe distance from the vehicle in front, and below the speed limit (which the driver sets before switching the system on). It also works, unlike current cruise control systems, after the car has come to a halt, with it setting off again to keep up with the flow of the traffic…

…Next up is Remote Park Assist, an upcoming feature which will let car owners park in tight spaces without even being in the car. They park near the space, step out, then use the car fob to tell the car to park itself. The system works in reserve too, so drivers can extract their car from a tight space if someone has parked too close to them. Again, this system is also available on the new 7-Series, but Ford will bring it into the hands of drivers on a much lower budget.

The Alabama Justice Project has obtained documents that reveal a Dothan Police Department’s Internal Affairs investigation was covered up by the district attorney. A group of up to a dozen police officers on a specialized narcotics team were found to have planted drugs and weapons on young black men for years. They were supervised at the time by Lt. Steve Parrish, current Dothan Police Chief, and Sgt. Andy Hughes, current Asst. Director of Homeland Security for the State of Alabama. All of the officers reportedly were members of a Neoconfederate organization that the Southern Poverty Law Center labels “racial extremists.” The group has advocated for blacks to return to Africa, published that the civil rights movement is really a Jewish conspiracy, and that blacks have lower IQ’s . Both Parrish and Hughes held leadership positions in the group and are pictured above holding a confederate battle flag at one of the club’s secret meetings.

Depressing.
link to this extract

Apple Watch was released April 10th 2015. Eight months later we are holding the first Apple Watch conference. To kick off the discussion, here are my favorite myths about this new product.

These aren’t obvious, except when you read them. I particularly liked this one:

Myth 8: The Watch has a weak battery
I’ve never gone a day with less than 50% battery remaining. Since we need to recharge ourselves once a day, the watch conforms to our biology. Unless you sleep far away from a source of electric power, the Apple Watch has enough battery life.