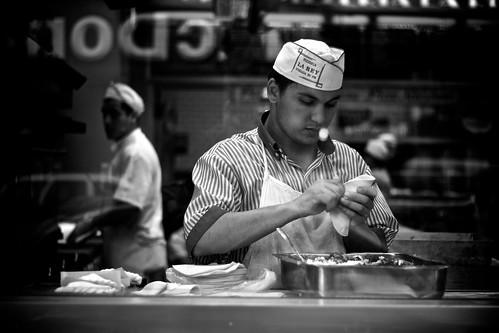 Cooking, though not devised by computer. Photo by Nicolas Alejandro Street Photography on Flickr.

A selection of 9 links for you. Everyone else is seeing a different set. I’m charlesarthur on Twitter. Observations and links welcome.

Do Androids dream of electric cheetahs in sheeps’ clothing jumping over things? Whatever it is.. this is very worrying.

Google may have left the best Android “M” feature out of the keynote: automatic app data backup and restore » Android Police

Yes, it’s happening. Dot. Gif. Android apps are finally getting state backup in the new “M” version of the OS. The full details are here. The short of it is that Android apps will now automatically back up to Google Drive, up to 25MB per app, with no new code required from developers. This is huge. What’s backed up? Settings and app data, which is to say, basically everything so long as you’re not talking about something over 25MB in total size. While this may still mean signing into your apps on a new device depending on the app’s security, once you do log in, the concept here is that all your settings and saved app data should just reappear on your new device. Which, holy cow, haven’t we been asking for this since the beginning of time?

Great – in 2016, Android will have the backup capability that iCloud offered since 2011. Given Google’s huge power in cloud services, it’s really strange this hasn’t been in place much earlier.

So if Pay is going to be the new payment standard on Android, what’s going to happen to Wallet? Well, a new post on the Google Wallet Google+ account is trying to help clear up this muddy situation. According to the post, the Wallet service has seen a ton of growth in the number of people sending money to one another, whether that’s through Gmail or the Google Wallet application. So, Google Wallet is sticking around, and will receive a big revamp in the coming months that sounds like it will focus on payment transfers, as opposed to actually handling the payments themselves. Here’s a little taste as to what the new Wallet app will bring, as explained by the Wallet team:

The new app will allow anyone with a US debit card to send and receive money for free within minutes – even if the other person doesn’t have the app. The money you receive can either be directly sent to your bank account or it can be spent in stores using the Google Wallet card.

We would be lying if we said this whole situation wasn’t confusing.

The following recipes are sampled from a trained neural net. You can find the repo to train your own neural net here: https://github.com/karpathy/char-rnn Thanks to Andrej Karpathy for the great code! It’s really easy to setup.

But now go and read the recipe. Beef! Pineapple! Orange juice! Sherry wheated curdup! “You made the recipe, you eat it.”

He called it back in April 2013 (“Predicting Android’s change of direction“). Now, he writes:

Google itself mentioned that Android M is mainly about fixing bugs and annoyances in Lollipop, and if that is to be believed, then the next version of Android coming out in 2016 should have many more features. However, since I am now more confident of my reading of Google’s strategic imperatives, I am pretty sure that this will not be the case. I predict that the 2016 version of Android will also not have any major new features. In short, I am now sure that Google no longer intends to compete with iOS with Android. Essentially, they are giving up the high-end smartphone market to Apple and they are cool with that. Instead, Google sees Android as a vehicle to spread their services to market segments that iOS cannot penetrate. How will this strategy fare in the future? This strategy is sound if Google’s sole objective is to learn about what people are doing. However, from a financial standpoint, there are many risks. By far the largest risk is, what if Apple is successful in distancing itself from Google? What if Apple somehow succeeds in significantly reducing the number of Google searches performed on iOS?

In the demo, while playing a Skrillex song, Google director of product management Aparna Chennapragada asked the device, “What’s his real name?” And a moment later, the answer came: “Sonny John Moore”. Now on Tap is what allowed Google to know the context for “him”. It was a cool demo. But as soon as I saw it, I took my iPhone, held down the home button, and asked Siri, “What’s Skrillex’s real name?” And a moment later came the answer: “Sonny John Moore”. Allowing Google to index everything the apps you use show or play for you seems like a stiff privacy price to play for the ability to use “him” in that query, especially when, in my opinion, “What is Skrillex’s real name?” is the natural way most people would pose the question. Now on Tap has much more potential than this, of course. But, still. To me, this week’s I/O keynote made me more convinced than ever that Google is turning into the Microsoft of old: a company whose ambitions are boundless, who wants its fingers in every single pie, and who wants to do it all on its own. A company whose coolest stuff is always in the form of demos coming in the future, not products that are actually shipping now.

Wellll… the Photos app, which embodies machine learning (wonder if Pete Warden is involved – his company Jetpac was bought by Google last year), is shipping now, but cross-platform. That’s the thing: the some-day-my-demos-will-be-real things are OS-specific, while the right-here-right-now things are cross-platform. But that “new Microsoft” meme is a hard one to shake off. Notice how it attaches when you keep getting hardware wrong and have to try it again and again.

As growth slows in an industry, the only way for companies to keep growing is to win market share (hard) or buy other companies. This is especially true in semiconductors because most of these companies outsource their manufacturing to the foundries like TSMC and Global Foundries. When one chip company buys another, the combined entity gets better pricing at the foundry (as they are now a bigger customer). The combination also gets to eliminate the duplicated non-design functions. You do not need two CEOs, nor two CFOs, not even two Corporate Development VPs (a not so subtle reminder that I am now looking for a new job). For several months now, I have been going around talking to friends at chip companies preaching this view – the industry will consolidate from over a hundred companies today down to five in a few years. In these conversations, I have always used Broadcom as an example. I would note that “Even Broadcom is not too big to get acquired someday.” So apparently, someday is yesterday. When the dust settles, I think there will be just five massive companies left in the business. (That will clear the decks for a new form of semis companies to emerge, but that is years away.) Here is my guess as to who the survivors will be.

You can probably guess three of them, but all five?

At this year’s I/O, in lieu of splashy reveals, Google is announcing some minor tools for developers, including a way to show bird’s eye map views in their smartwatch apps. The company also revealed that it has 5,000 true watch apps in the Google Play Store, plus 1,500 custom watch faces. This year’s conference is mainly a time to reflect, and convince app makers that Android Wear is ready to compete with the Apple Watch.

Here are 2 and 3: “nobody agrees what looks good; people want smaller watches”. In pursuit of not achieving 3,

The brunt of the blame falls to the battery, which is the largest component by volume inside Android Wear smartwatches, [Android Wear lead product manager Jeff] Chang says. Still, Google doesn’t want to mandate smaller watches if it means giving up an always-on display or all-day battery life, which he sees as core values. “To accomplish an always-on screen that stays on the whole time, and at least one full day of battery life, and to have a really small volume battery, that’s a big challenge,” Chang says. “We’re working very hard on it, but we do uphold all those principles dearly.”

BuzzFeed’s news is growing, but still a small part of its traffic » Digiday

BuzzFeed drew 76.7 million multiplatform unique visitors in April, according to comScore. The publisher historically hasn’t broken out its content by vertical to comScore, like other top news sites including CNN, Yahoo and The Huffington Post do. But it started to on a limited basis as of last month, when it began breaking out its Entertainment and Life coverage, which stand at 43.7 million and 20.1 million uniques, respectively. BuzzFeed doesn’t break out its news traffic, suggesting it’s still relatively low. Bottom line, BuzzFeed may have made headway a short time, but it is still a small player when it comes to news, in which it includes business, tech, politics and longform. “You’ll hear clients say, ‘We want a BuzzFeed-style article,’” said Kim Alpert, director of digital strategy at Walton Isaacson. But when it comes to news, it hasn’t delivered a consistent product that’s instantly recognizable, she said. “Vice and Mashable, you kind of know what you’re going to get. I don’t believe their news has really matured in that people say, ‘I get my news from BuzzFeed.’” With CEO Jonah Peretti recently hinting at going public, BuzzFeed could invite more scrutiny of its editorial model. BuzzFeed’s main revenue source is native advertising, a format that has been criticized for mimicking editorial. The publisher also has admitted taking down posts at advertisers’ requests.