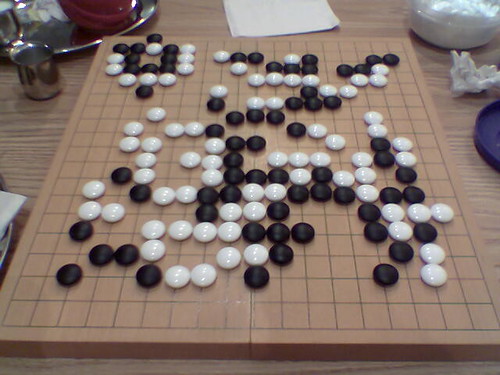 A Go endgame: where would you play next? DeepMind’s systems would know. Photo by chadmiller on Flickr.

Apple wants to be a services company » Business Insider

Jay Yarow with a neat summary of Apple’s conundrum:

Apple could lower prices of the iPhone to sell more units and then grow services, but it doesn’t seem to want to do that.

Cook said Apple already had a variety of price points, from the low-tier iPhone 5s to the high-end iPhone 6s Plus.

“I don’t see us deviating from that approach,” Cook said.

It is not principally a services company. The money it does make from services is actually pretty substantial, and threatens to overtake iPad revenue. Poor iPad.
link to this extract

Apple also increased iPhone channel inventory by 3.3m over the quarter compared to a decline of 0.2m in the same quarter last year. Keeping in mind that Apple reports sell-in (shipments), not sales to end users, this implies that iPhone sell-through actually declined by 4.3% YoY, from 74.7m to 71.5m units. This is the first such decline in the history of the product.

In addition to this sell-through decline, Apple’s revenue guidance for the next quarter implies a steeper YoY decline in unit sales. And finally, this was accompanied with a YoY increase in average selling price (ASP) which suggests that the iPhone mix is shifting towards higher end models…

…As Clay Christensen is fond of saying, “Disruption is a process, not an event”. The mechanics of low-end disruption have been working ever since the first Android smartphone was unveiled in 2008. The key test for the iPhone will be the iPhone 7 cycle, starting in fiscal Q1 [Oct-Dec] 2017. In a “redesign year”, it will be easier to gauge whether meaningful product improvements can continue to generate increased demand or if today’s smartphones have already reached “good enough” territory.

The sell-through point is valid (only BlackBerry also gives the same data). The odd thing is that rising ASP: it points to people having the disposable income to buy the pricier models, which argues against the “low-end disruption” thesis.

DeepMind’s program AlphaGo beat Fan Hui, the European Go champion, five times out of five in tournament conditions, the firm reveals in research published in Nature on 27 January. It also defeated its silicon-based rivals, winning 99.8% of games against the current best programs. The program has yet to play the Go equivalent of a world champion, but a match against South Korean professional Lee Sedol, considered by many to be the world’s strongest player, is scheduled for March. “We’re pretty confident,” says DeepMind co-founder Demis Hassabis.

“This is a really big result, it’s huge,” says Rémi Coulom, a programmer in Lille, France, who designed a commercial Go program called Crazy Stone. He had thought computer mastery of the game was a decade away.

The IBM chess computer Deep Blue, which famously beat grandmaster Garry Kasparov in 1997, was explicitly programmed to win at the game. But AlphaGo was not preprogrammed to play Go: rather, it learned using a general-purpose algorithm that allowed it to interpret the game’s patterns, in a similar way to how a DeepMind program learned to play 49 different arcade games.

This means that similar techniques could be applied to other AI domains that require recognition of complex patterns, long-term planning and decision-making, says Hassabis. “A lot of the things we’re trying to do in the world come under that rubric.” Examples are using medical images to make diagnoses or treatment plans, and improving climate-change models.

This is a gigantic result; being good at Go requires a subtle intuition and feel for space. (At least, for a human.) It’s far, far more complex than chess. And that this was done by a non-specific program has colossal implications.

As Nature’s leader on the topic comments, as these systems spread into our lives, “The machine becomes an oracle; its pronouncements have to be believed… Intuitive machines will need more than trust: they will demand faith.”

As a side note, DeepMind looks like one of Google’s smartest purchases – perhaps after YouTube.
link to this extract

[Tech writer Stacey Higginbotham’s] Nest device began trying to cook her family in the middle of the night, something Nest first tried to blame on her smart garage door opener, then tried to blame on her Jawbone fitness tracker (Nest never did seem to pinpoint the cause). Her report suggests that an overall culture of “arrogance” at Nest shockingly isn’t helping pinpoint and resolve bugs:

“One Nest partner, who declined to be named to preserve his business relationship with the company, said that Nest being quick with the blame didn’t surprise him, citing a culture of arrogance at the company. When something went wrong during integration testing between his device and Nest’s, problems were first blamed on his servers and team.”

And fast-forward to last week, when researchers putting various internet of thing devices through tests found that the Nest thermostat was one of many IOT devices happily leaking subscriber location data in cleartext (with Nest, it’s only the zip code, something the company quickly fixed in a patch). Granted Nest’s not alone in being an inadvertent advertisement for a product’s “dumb” alternatives. In 2016, smart tea kettles, refrigerators, televisions and automobiles are all busy leaking your private information and exposing you to malicious intrusion (or worse).

It’s a fascinating, in-progress lesson about how our lust for the sexy ideal of the connected home appears to be taking a brief pit stop in reality.

Vigilant solutions and the spread of police surveillance » The Atlantic

Throughout the United States—outside private houses, apartment complexes, shopping centers, and businesses with large employee parking lots—a private corporation, Vigilant Solutions, is taking photos of cars and trucks with its vast network of unobtrusive cameras. It retains location data on each of those pictures, and sells it.

The company has taken roughly 2.2bn license-plate photos to date. Each month, it captures and permanently stores about 80m additional geotagged images. They may well have photographed your license plate. As a result, your whereabouts at given moments in the past are permanently stored. Vigilant Solutions profits by selling access to this data (and tries to safeguard it against hackers). Your diminished privacy is their product. And the police are their customers.

Sounds a bit similar to the UK police’s Automatic Number Plate Reader network, which extends around the UK, except this is historic too. (Then again, the UK’s ANPR system probably is too.)
link to this extract

How to wake up at 5am and build your startup » Medium

It’s hard to admit, but no one really knows what they’re doing at first. Even the largest startup unicorns in the world, took a long time to find their footing. AirBnb survived by selling political themed cereal Obama O’s and Cap’n McCain’s. #Slack came out of a failed game “Glitch.” Even YouTube began as a video dating service “Tune in Hook Up.”

Micro-startups work well with the Lean Startup methodology. Not only are micro-startups easier to implement, but provide a shorter feedback loop that keeps you more in touch with your audience. With 75% of all startups failing, would you rather spend 100 days in a basement building a product your customers “might” like or connect with your audience everyday “while” you adapt your startup to address your customer’s pain-points? Don’t build another Blockbuster.

Start with the assumption that you’re wrong. Constantly validate your theories through micro-experiments. When I first started “Krown.io”. I explained the service as an “Annotation Blogging Platform.” That was, until I found out the majority of people have no idea what “Annotations” are. We tried a variation of “Smart Blogging,” “Highlight Blogging,” “Feedback Blogs,” and “Contextual Blogging Platform.” Which surprise, surprise. People still had no idea what we were talking about. So we added a bare-to-the-bones explanation, “Highlight a text and add comments directly on the highlighted text.” Validate your hypothesis.

The startup advice is fine. Waking up at 5am isn’t that hard, but he makes it sound like one of the 12 tasks of Hercules.
link to this extract

Cluley is amazed – as you will be:

The first vulnerability [of four, all of which could be exploited remotely] (CVE-2016-1491) is perhaps the most infuriating. CoreLabs discovered that whenever SHAREit for Windows is configured to receive files, this process creates a Wi-Fi hotspot that is ‘protected’ by the password “12345678”.

Not surprisingly, this password just recently earned a top spot on the latest list of worst passwords you could possibly choose.

What is surprising is the fact that Lenovo would incorporate such an insecure password into its application — and one that does not change, no less!

Then again, I suppose the issue could be worse. In the second vulnerability (CVE-2016-1492), which applied only to SHAREit for Android, there is no password set up to protect the Wi-Fi hotspot when the app is configured to receive files.

To be sure, it doesn’t say much when Lenovo could have mitigated two separate vulnerabilities by adhering to the most basic principles of password security.

But moving right along. The third vulnerability (CVE-2016-1490) discovered by CoreLabs builds upon the insecure Windows password issue discussed above

When elephants do software while dancing. Yes, it was Lenovo which preinstalled Superfish.
link to this extract

Mesmerizing migration: watch 118 bird species migrate across a map of the western hemisphere » All About Birds

For the first time, scientists at the Cornell Lab of Ornithology have documented migratory movements of bird populations spanning the entire year for 118 species throughout the Western Hemisphere. The study finds broad similarity in the routes used by specific groups of species—vividly demonstrated by animated maps showing patterns of movement across the annual cycle.

There’s also a version showing which species is which.
link to this extract

Sharad Mehrotra, iPhone maker Apple’s enterprise mobility head in India, has quit and set up a handset company to compete in the world’s fastest-growing smartphone market. Mehrotra, who was with Apple India since October 2007, has cofounded Hyve Mobility , which will launch smartphones using Android, the operating system that rivals Apple’s iOS, by March.

“While consumers today have a lot of options to choose a smartphone, the element of customer delight is seriously missing,” he told ET, adding that it was high time to get into the smartphone market…

…”In the current Android scenario, no brand enjoys customer loyalty and we want to bring the change with our path-breaking products portfolio and service offerings,” said [Aditya] Agarwal, MD of Hyve Mobility.