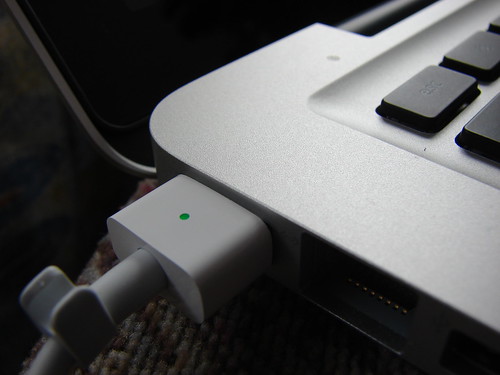 MagSafe 2: you’re gonna miss it. Photo by yum9me on Flickr.

Want to know my pick for the best technology Apple ever introduced? MagSafe. That’s the magnetic attachment system for power cords which it unveiled in January 2006 with the new MacBook Pro. Six years later, it followed that up with the MagSafe 2 connector.

From 2006 until the USB-C MacBook in mid-2015, every portable had a MagSafe connector of one sort or another. (The desktop machines didn’t.) As a technology, it’s so clever and so convenient, being reversible, and an inherent safety feature – you (or your dog/significant other) couldn’t destroy your laptop by accidentally walking into the power cord and pulling it off your desk, or destroying the power socket on the machine, either of which would be expensive to get fixed.

And now, I suspect Apple is going to get rid of MagSafe all across the laptop line, and replace it with USB-C. That’s what the “Hello again” launch looks like to me. (The MacBook Air might be kept on, unimproved and unadvertised, to anchor a lower price point.)

This is going to be a hell of a thing. From April 2006 to the end of December 2012, Apple sold 57m laptops, with – it’s a safe assumption – MagSafe adaptors on all of them. It used to split out the numbers, but stopped at the end of 2012, when the desktop:laptop ratio was running at 20:80.

Since then it has sold a total of 88.3m laptops and desktops; at that 20:80 ratio, one could reckon it has sold another 70.6m laptops.

That means that since the first MagSafe was introduced, Apple has sold a total of more than 120m laptops with MagSafe chargers.

And now it’s dumping them for USB-C.

Oh man. This is going to be a hell of a thing. If you’re like me and my family, then you have a ton of MagSafe chargers, possibly of different generations with the little magnetic doohickey which converts a MagSafe 1 to a MagSafe 2, distributed around your home and office. It’s so convenient not to have to take your charger from home to work and vice-versa; no forgetting. If you upgraded your laptop during the past ten years, you didn’t have to worry about getting a different charger; you could use the same one, or upgrade it. MagSafe is great.

Now? USB-C is coming. But you can’t make it compatible with MagSafe. No doohickey is going to make it right.

I can see that while a lot of people have been waiting for the new Mac laptops, this is going to be a real wrench. It’s as bad as the original iMac in 1998, which ripped up peoples’ investments in ADB plugs and forced them to USB. Except that at least then you could make converters which would get ADB to talk to USB; you won’t be able to get your old MagSafe charger to work with USB-C. (If you could, Apple would have done that with the new USB-C MacBook.)

There’s no doubt Apple is going to go all-out on USB-C with the new models; it wouldn’t surprise me if it revises the entire desktop and laptop line to introduce the new ports. When it does this stuff, it does it for keeps.

I’d love to be wrong on this; I’d love for Apple to have realised how wonderful MagSafe is, and determined to implement it on USB-C. But as noted above, if it could, then it would have done this on the MacBook.

Man, you’re going to miss those chargers. It’s going to take a long time for 10 years’ worth of chargers to go away. And a little part of me hates USB-C that tiny bit more; even though I’m in no hurry to upgrade, I know that when it happens all those chargers will be useless to me. Damn.

(On Twitter, Ken Tindell points out that Griffin – which picked up on the gap left when the first iMac introduced USB – has done a magnetic USB-C connector. Looks nifty.)

8 thoughts on “Fear of a USB-C planet: why we’re going to miss Apple’s MagSafe”