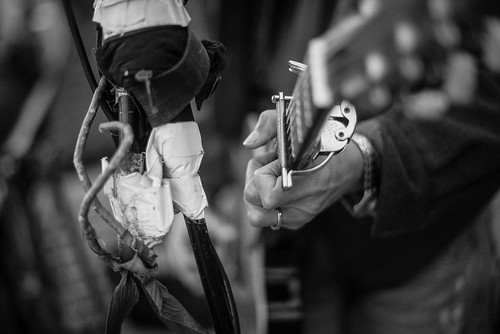 “Do you know Google’s getting into another content business?” “You hum it, I’ll play it”. Photo by guzzphoto on Flickr.

What did they say? Google including song lyrics in search results >> WSJ Digits blog

Google is trying to answer some of the world’s biggest questions. That list now includes: Wait, what did he just sing?

Song lyrics are now part of the increasingly robust packet of information Google shows in its search results, a move that threatens traffic to popular lyrics sites.

It’s unclear when Google started showing lyrics on the initial results people see when searching for, say, “Love Is Blindness lyrics.” (A TechCrunch article traces it to a post on a blog about SEO that points to this Google+ post from Dec. 19.) For now, the lyrics apply only to U.S. searches.

A Google spokewoman said, with apologies to Led Zeppelin we’re sure, “There’s a feeling you get when you turn to a song and you know that the words have two meanings. Well it’s whispered that now if you go search the tune, maybe Google will lead you to reason. Ooh, it makes you wonder.”

Makes you wonder if lyric sites are stuffed – as in, how can they make their businesses work now? How many content businesses is Google going to tramp into?

North Korea experienced sweeping and progressively worse internet outages extending into Monday, with one computer expert saying the country’s online access is “totally down.” The White House and the State Department declined to say whether the U.S. government was responsible.

In the last year or so there’s been a lot of bad news about how intelligence agencies and hackers can exploit weaknesses in internet communications to snoop upon our conversations and private messages.

Indeed, such has been the avalanche of revelations that it’s not uncommon at all to hear security researchers advise you to turn off your phone’s WiFi, and communicate via regular calls vand SMS messages instead because of the 3G phone network’s built-in advanced encryption.

Two German security researchers have uncovered what they claim are serious security flaws that could allow criminals and intelligence agencies to spy upon private phone calls and text messages transmitted via cellular networks.

Still, as long as it doesn’t interfere with our film release schedule, that’s OK.

I don’t often make predictions, but I’m willing to make this one: 2015 is going to be a huge year for Android. I’m not talking about the Market Share Wars, I never cared for them and Android won them long ago. I have little interest in the Who Makes The Most Money Wars either, I’m often baffled as to why people even care. As a developer and user of mobile platforms I’m more interested in app profitability, quality and diversity. I think 2015 is going to be a huge one for Android in this regard. Don’t believe me, ok, allow me to walk you through why.

Let’s start off with a myth: “No one makes money on Android”. I hear that all the time. The irony of the fact that we make 80% of our daily income on Android doesn’t escape me as these people wax eloquent about how this is a well established fact

Shifty Jelly does nicely from a podcast app; but Apple offers a free podcast app, so it’s not surprising that he sees money from Android and not iOS.

Reading this, though, he doesn’t quite explain what will make 2015 the specific year, or how we’ll measure it. More that it’s not a bad place for developers to be – which those who are interested in it probably know already.

More subtly, Android’s expansion in 2015 is going to be in low-income countries. Total revenues will go up, but per-install revenues will probably fall – and mobile ad rates will fall in line with installation growth.

Riding in a self-driving car is not the white-knuckled, cybernetic thrill ride one might expect. The car drives like a person, and after a few minutes you forget that you’re being driven autonomously. You forget that a robot is differentiating cars from pedestrians from mopeds from raccoons. You forget that millions of photons are being fired from a laser and interpreting, processing, and reacting to the hand signals of a cyclist. You forget that instead of an organic brain, which has had millions of years to evolve the cognitive ability to fumble its way through a four-way stop, you’re being piloted by an artificial one, which was birthed in less than a decade.

The unfortunate part of something this transformative is the inevitable, ardent stupidity which is going to erupt from the general public. Even if in a few years self-driving cars are proven to be ten times safer than human-operated cars, all it’s going to take is one tragic accident and the public is going to lose their minds. There will be outrage. There will be politicizing. There will be hashtags.
It’s going to suck.

But I say to hell with the public. Let them spend their waking lives putt-putting around on a crowded interstate with all the other half-lucid orangutans on their cell phones.

The secret world of stolen smartphones, where business is booming >> Wired

A picture slowly emerged of a so-called credit-mule scheme, ingenious in its simplicity and impressive in its reach. Middlemen such as Shamshad were dispatched to seemingly random American cities, where they trolled homeless shelters and halfway houses, offering $100 to anyone who would buy, on their behalf, a few on-contract phones from a local electronics store.

Back in California, the contraband was handed off to Wen and Tan, who arranged to have the phones shipped to their contacts in Asia. The profit margin was enormous: In North America, wireless carriers typically subsidize the cost of our smartphones in order to lure us into multiyear voice and data contracts. To obtain a phone, in other words, we fork over a small fraction of the device’s actual market worth. Wen and Tan took advantage of the system by obtaining iPhones — through middlemen and mules — for $200 a pop, then selling them in China for close to $1,000.

Records obtained by the eCrime Unit indicate that in a single year, Wen mailed 111 parcels using his FedEx account. By the time the whole operation was brought down in March of 2013, he and his wife had become very wealthy, to the tune of close to $2.5m in annual income.

Terrific article, rich in detail and observation. The numbers implied in the insurance sums and the numbers is amazing.

It is foolish to ignore the growing scale of these platforms which are growing in capabilities and are becoming ecosystems in themselves.

If we look at carefully these platforms are beginning to look identical and at some point in future will become a commonplace. However, the differences that will make them standout or survive in long run is their business model and their reach in terms of capabilities and user base.

These ambitious app based platforms are expanding their reach across multiple areas attracting users to spend more time communicating, shopping as well as consuming content. These are creating greater amount of stickiness and using their horizontal business model to scale and with presence on the major platforms from iOS to Android to Windows to target the complete pie of smart devices users.

Notably including Samsung ChatON (reckoned here to have 100m monthly active users), but not Apple’s iMessage – which probably has about 300m MAUs.

What happened when Marissa Mayer tried to be Steve Jobs >> NYTimes.com

Nicholas Carlson (in an extract from his forthcoming book on Yahoo:

Previous Yahoo C.E.O.s had underinvested in mobile-app development, plowing money into advertising technology and web tools instead. A couple of days into the job, Mayer was having lunch at URL’s when an employee walked up to her and introduced himself as Tony. “I’m a mobile engineer,” Tony said. “I’m on the mobile team.”

Mayer responded to Tony, “Great, how big is our mobile team?” After some back and forth, Tony replied that there were “maybe 60” engineers. Mayer was dumbfounded. Facebook, for instance, had a couple of thousand people working on mobile. When she queried the engineering management department, it responded that Yahoo had roughly 100. “Like an actual hundred,” Mayer responded, “or like 60 rounded up to 100 to make me feel better?” The department responded that it was more like 60.

Companies like Facebook and Google are known for their fast-paced product updates. Yahoo, by contrast, was sluggish. Yahoo Mail, with its 30 billion emails a day, was arguably the company’s most important product. But despite the decline in desktop email use, Yahoo hadn’t built mail apps for smartphones. It had simply made the Yahoo Mail website usable on smaller mobile screens.

Although we know how the story turns out, it seems like this is going to be a book worth reading. (There are all sorts of pieces you could pull out of this article. Yahoo has been such a mess for so long.)

The ban on third parties may not last for too long, however. We know that Snapchat is working on building a mobile messaging platform, and that could mean that it finally releases an official API to allow third parties to connect to its service while providing increased protection for user privacy.

That said, the company recently introduced video advertising so keeping its service free of third party apps on all devices gives it absolute control over targeting its user base with ads, thus potentially maximizing its value to advertisers.

None of this means much for Snapchat fans on Windows Phone, who have never had an official app and now don’t even have unofficial ones. Such are the problems of being a ‘third’ platform in today’s iOS-Android dominated world.

I recall Stephen Elop at Nokia in mid-2013 pointing to a Snapchat-compatible app as evidence of how things were improving. (It’s worth looking back at to see how things haven’t changed for Windows Phone in those 18 or so months.) Wonder if this clearout was some sort of precondition by Snapchat before it would build a first-party app.