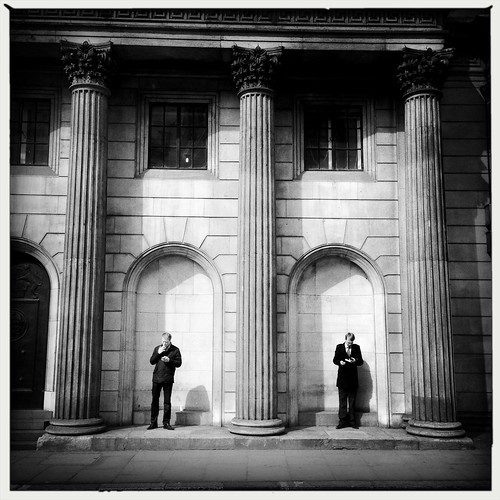 Bank of England: visualise this. Photo by Michael Sissons on Flickr.

A selection of 9 links for you. Yes, you. I’m charlesarthur on Twitter. Observations and links welcome.

I’ve asked Lenovo about this: it hasn’t so far been able to tell me how much Pokki paid to be installed. It seems to me a fair presumption that Pokki did pay to be included – it offers various shareware apps via its menu. (Pokki doesn’t interfere with network traffic.) Here’s Pokki’s blogpost on the “partnership”. (That’s an Internet Archive link because I can’t get the original to load.)

Superfish might be the most recent, but it wasn’t the first time Lenovo was trying to improve its margins with preloaded software.

Lawyers using Ross ask a legal question, and the program sifts through thousands of legal documents, statutes, and cases to provide an answer. Ross’s responses include legal citations, suggest articles for further reading, and even calculate a confidence rating to help lawyers prepare for cases. Because Ross is a cognitive computing platform, it learns from past interactions, meaning that Ross’s responses will grow to be more accurate as lawyers continue to use its system.

Via Mark Gould, who says that this sort of thing could automate legal functions… so what happens to those white-collar jobs?

Apple’s OS X operating system was the most vulnerable in 2014, according to a new report by the US National Vulnerability Database (NVD).

OK, I get it had the most vulnerabilities. Was it the most exploited, though?

Data Visualisation Competition – Are you a Viz Whizz? » Bank of England

Three criteria will be used to judge the entries. Is the visualization:

• showing something novel or insightful that is relevant to the Bank?
• clear and easy to understand?
• aesthetically pleasing and original?

Prize
Those entries that make the finalist day on Thursday 4 June will receive a tour of the Bank of England and its archives in the morning, followed by lunch.
Judging will take place in the afternoon where finalists will present their entries to an expert panel.
The winning entry will then be announced and the winning team will receive the prize of £5000. Refreshments will then be served for the contestants who will have the chance to mingle with the judges and other Bank staff.
The prize will be for the entry (and not per person).

Fascinating data: 1.2bn watches sold annually, 29.2m Swiss watches, almost all the rest from China and Hong Kong. Average values hugely different. It’ll be fun to see how the annual revenues for Swatch/Omega and Rolex look in a year’s time. (Via Robin H.)

Thomas Fox-Brewster on the pushback against SIM card maker Gemalto’s claim that no siree, the keys are all locked in this safe:

First, [Gemalto] has assumed that its “highly secure exchange processes” have not been compromised. Second, Gemalto’s report was put together in a week, which might not be enough time to uncover far more surreptitious activity across its network, especially given the technical ingenuity of the alleged adversary. “Do they know the truth? Do they seriously believe they can conduct an investigation uncovering the truth in less than a week? This is a rush job to placate shareholders. Hopefully, they will keep investigating,” said Dr Ralf-Philipp Weinmann, who runs Comsecuris, a security research and consulting company. “Attacking SIM card vendors is a very economic solution to breaking encryption of cellular telephony.”

Perhaps the most worrying of Gemalto’s assertions is that it’s not possible to break connections over 3G or 4G using the methods described in the report. As Gemalto must know, it’s possible to force phones to “fail over” to easily-crackable 2G by jamming 3G and 4G connections.

My money’s on GCHQ. Those people are smart.

GPG And Me » Moxie Marlinspike

When I receive a GPG encrypted email from a stranger, though, I immediately get the feeling that I don’t want to read it. Sometimes I actually contemplate creating a filter for them so that they bypass my inbox entirely, but for now I sigh, unlock my key, start reading, and – with a faint glimmer of hope – am typically disappointed.

I didn’t start out thinking this way. After all, my website even has my GPG key posted under my email address. It’s a feeling that has slowly crept up on me over the past decade, but I didn’t immediately understand where it came from. There’s no obvious unifying theme to the content of these emails, and they’re always written in earnest – not spam, or some form of harassment.

Eventually I realized that when I receive a GPG encrypted email, it simply means that the email was written by someone who would voluntarily use GPG…

… I think of GPG as a glorious experiment that has run its course. The journalists who depend on it struggle with it and often mess up (“I send you the private key to communicate privately, right?”), the activists who use it do so relatively sparingly (“wait, this thing wants my finger print?”), and no other sane person is willing to use it by default.

Been available 20 years, yet has only 50,000 “strong” keys and under 4m published in the keypool. I’ve had a lot of PGP keys and forgotten the passwords to them all.

Patricia Hernandez did a lot of research:

One developer who I’ll call “Alex,” because they didn’t want to be identified by their own name, told me about a situation where breasts had gone wrong—and it wasn’t the result of tech limitations. Alex told me that their studio was very concerned with its depiction of breasts. Even so, there were stumbles along the way.

“The very first thing I noticed when [the studio was] animating breasts is, I would look at them, and they were just not moving in a way that was even remotely natural,” Alex said.

Game developers have all the interesting conversations. It’s a fascinating piece as much as anything for the explanation of how developers *do* cope with the problem. (As one commenter asks, should the uncanny valley of video game breasts be called the uncanny cleavage?) So much effort, and then the premise of the game is ridiculous…

On WordPress.com and Bitcoin » Matt Mullenweg

WordPress is ending the ability to pay for its services using bitcoin, principally because it’s working on a code rewrite of its payment system, and wants less complication in the number of currencies it has to support. So some questions were put to Mullenweg:

Q: You mention that bitcoin has low volume compared to other payment methods, has this always been the case? Has its volume share changed over time?

A: The volume has been dropping since launch, in 2014 it was only used about twice a week, which is vanishingly small compared to other methods of payment we offer. We supported Bitcoin for philosophical reasons, not commercial ones.

Something of a reality check there. Although Mullenweg also says:

I believe Bitcoin or some other blockchain-like system will be the basis of the majority of financial transactions in the future, from small remittances to multi-billion dollar corporate acquisitions. I think transaction costs should follow Moore’s law, and I don’t think we’re going to get there with the centralized gateways that currently account for the overwhelming majority of transactions. I also personally hold Bitcoin, I’m an advisor to Stellar.org, and my friends make fun of me for bringing up Bitcoin and the blockchain in unrelated conversations.