Apple released its fiscal fourth-quarter results (calendar third quarter) to the end of September on Thursday. So following up on my post from earlier this week, here’s what the data tells us about that period – which already feels like it’s in the rear-view mirror, what with the iPhone XR and new iPads and Macs having been launched just in the past couple of days, mid-quarter.

But analysing the effects of those is going to be more difficult than this: Apple announced that it’s no longer going to provide unit sales data. We’ll only have revenues for iPhones, iPads and Macs. This is being interpreted as an attempt to hide bad news that’s surely on the way for unit sales; Apple isn’t happy about this interpretation, and insists that its user base is growing, and that a focus on unit sales – the horse race – distracts from what’s really going on. It wants people to look at the growth in (high-margin? We’ll find out because it will reveal, next quarter) areas such as Services.

Anyway! On with the graphs. First, average selling prices (ASPs). Shed a tear, it’s the last time we’ll be able to do them like this.

Next, the divisional revenues. Note how Services is definitely the second-biggest.

And let’s see the hardware v services breakdown more clearly in the next two graphs. First, just broken out.

And now – apologies for its slight lack of clarity – the growth in Hardware (on the left axis, in purple) v Services (on the right, in brown). Services is growing faster than Hardware. 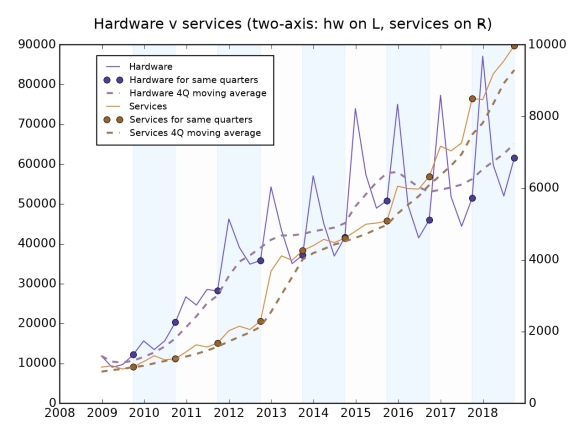 Now: the overall picture of products sales. Again, we’re not going to be able to do this again, so feast your eyes. And look at how FLAT everything is. Unit sales growth has stopped for the past two years.

And next we have operating profit (green) and revenue (orangey). The gap is actually growing: Services seems to be less profitable than Hardware, as we knew. But both still trending up. 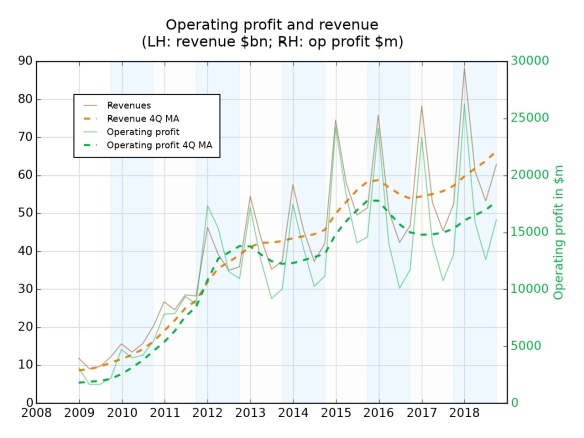 Now some more detail on the iPhone. Look at that uptick in ASP! And look at how flat sales are on the 4Q moving average. The growth has gone out of the market overall; global smartphone sales were actually down 6% in this period, so Apple actually grew its share by standing still.

How about Macs? Sales are once more flat (the line with dots), ASPs are up. That ASP line will probably go up next quarter – though we won’t know exactly how much.

Now to the graphs which tell us how the machine is working: inventory and R+D. You’d expect that inventory would build ahead of a big launch, and then fall, and so it proves. Even so, it’s big…

But if you look at it as a percentage of hardware revenue, inventory is really high. REALLY high. Heading up to 2%, which implies lots of things sitting in warehouses. I’ve had a look at Apple’s filings, and it doesn’t break down inventories into raw goods/work-in-progress/finished, so we can’t know if that’s self-driving cars being built or the iPhone XR (then unreleased) sitting in Chinese factories. Probably the latter, mostly.

As to the future: research and development spending. Look, it’s up!

And as a percentage of revenue, it’s also at a historic high. This either balances out the inventory stuff, or is somehow caused by it.

Finally, the geographical breakdown. The Americas (particularly the US) is driving this, but notice how things are slower in China and the rest of Asia. Europe generates more revenue than China; there’s no sign of that changing in a hurry. Apple’s hope that China would become its No.2 source of revenue seems to have been dashed. 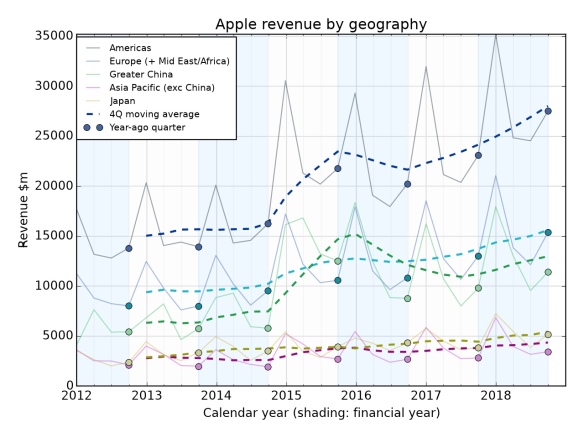 And that’s it! Comments welcome, including suggestions for the colours. I may redraw these so that the lines are more clearly labelled, but will leave the text alone.