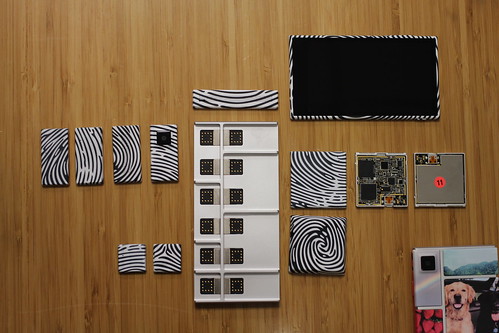 Project Ara’s Spiral 2 prototype. This is about as far as it got. Photo by pestoverde on Flickr.

April 2014: “Building blocks: how Project Ara is reinventing the smartphone” (The Verge):

Ara modules need to have a way to communicate with the rest of the phone, but physical contacts are often dirty and unreliable. So instead, the modules will use “capacitive interconnects,” which are wireless and theoretically more reliable, especially at high speeds. The capacitive pads also will help save space on the modules, since they’re smaller than physical pins.

When it comes to keeping the modules in place, physical latches are fiddly and can easily break. Instead, Ara phones will use electropermanent magnets to hold them in place…

…The head of Project Ara, Paul Eremenko, says he is planning “the most custom mass-market product ever created by mankind” without a trace of irony in his voice.

He and his team have just one year left to do it.

The Verge there, with pretty much the ur-version of the “breathless visit to the lab” feature. And, I’ll point out, it illustrates another classic element of Verge journalism: no effort to seek an outside view from an analyst, OEM, or even a person in the street to ask them “would a phone like this ever sell/make a profit?” It’s this lack of attempt to triangulate on claims that frustrates me again and again about The Verge. So often it’s average trade paper journalism dressed up in pretty web clothes.

My commentary at the time: (when I recorded the link): “The smartphone business is zero-profit for most players. How would a business made up of competing parts suppliers be any more profitable – even if the finished product can be made to work as well as a unified phone designed by a single company? It would either flop, or be driven to commodity (and so drive out suppliers) almost at once.”

Kudos therefore to Craig Grannell, who days afterwards wrote for Stuff that “Modular smartphones are the building blocks of a tech shambles” (Stuff):

“what first seems like a simple, obvious idea is in reality a mess waiting to happen, and one that will offer few benefits for the end user. They won’t save a great deal of money, few will care about interchangeable parts anyway, some will wonder why there are big gaps on the back of their smartphones if they can’t get the various bits to line up properly, and a few geeks will proclaim it the best thing ever, before getting distracted approximately eight seconds later by some great new Google robot that gets injected directly into your hypothalamus.”

Things went quiet for a little while. And then came autumn, and a bit more publicity.

October 2014: “Google plans to make a component store for its modular phone” (Engadget):

Google’s Paul Eremenko, director of Project Ara, recently revealed that the company will be taking a cue from the Play store to create a similar shopping experience for its modular smartphone. What this means, essentially, is you’d be able to buy or sell different components from a single hub, just as is the case now with apps, music, books and more on Google Play – and it would also include reviews and recommendations.

Me: “At a guess, Ara isn’t going to end up as a phone project at all, but something more like Arduino or Raspberry Pi – a playground for hacking things together.”

Project Ara under Google’s Advanced Technology and Projects Group (ATAP) is currently working with more than 20 partners and aims to bring its modularized smartphone into commercial production in 2015, according to industry sources.

Makers in Taiwan’s supply chain will play an important role to help realize the production of modularized phones, with related handset frames to be produced by Quanta Computer and connector boards by Foxconn Electronics.

Things then went quiet. And quieter. And it turned out there had been “a delay” for unspecified reasons, but something to do with the problem of getting the parts to fit together and communicate.

When I shared Phonebloks it was just an idea, something I thought would make sense to reduce e-waste. It was a future vision, something that would hopefully be made in 5-10 years.

Some companies are trying to make a modular phone. Of all those companies Google is taking the biggest leap. They have an insane amount of resources/smart guys and set a 2 year timeframe for themselves to get it done. Seemed unrealistic and turns out it is. They are delayed for over a year!

However this is not bad. Sure the sooner it would be in our hands the better since we could save e-waste.

Me, at the time: “There will never be a useful phone using phonebloks. The premise might work for some lab/testing/environmental equipment, but the price and size will make it pointless when you can get a pocket supercomputer with phone functions for $50.”

At the time I asked “Won’t [Nest] get folded into Osterloh’s division now?” And lo, in August, it did.

May 2016: “Modular phone Ara to finally launch” (The Register). Except without a modular screen, GPU, CPU, RAM or sensors. What exactly was there to be modular then?

The world waited, and meanwhiel LG launched its G5 smartphone, which did have modular elements; it sold poorly. In summer Motorola launched the Moto Z, with “Mods” which nobody seemed very keen on (“a good phone headed down the wrong path“,” said Vlad Savov at The Verge – one of the few writers there who does take a reality-based position).

Alphabet Inc’s Google has suspended Project Ara, its ambitious effort to build what is known as a modular smartphone with interchangeable components, as part of a broader push to streamline the company’s hardware efforts, two people with knowledge of the matter said.

The move marks an about-face for the tech company, which announced a host of partners for Project Ara at its developer conference in May and said it would ship a developer edition of the product this autumn.

The company’s aim was to create a phone that users could customize on the fly with an extra battery, camera, speakers or other components.

A spokeswoman for Google declined to comment on the matter.

While Google will not be releasing the phone itself, the company may work with partners to bring Project Ara’s technology to market, potentially through licensing agreements, one of the people with knowledge of the matter said.

Is that an end to it? Probably.

But don’t worry. There’s always another idea lurking in the labs waiting for someone from The Verge to give it a writeup. Wind back to May 2016, and another ATAP division project, this one called Soli, which aims to put radar chips into electronics so you can use hand gestures to control things:

Google built a tiny radar system into a smartwatch for gesture controls (The Verge):

“How are you going to interact with an invisible computer?”

When you hear a question like that posted in a conference room at a major tech corporation like Google, you expect you’re going to be in for an hour or two of technophizing with few tangible results at the end of it.

But then somebody sets a smartwatch on the table in front of you. You snap your fingers in the air just a couple of inches away from it. And the digital watch face starts spinning.

Give it a couple of years and we’ll be writing the obituaries, I guess.

Like this? There’s also Start Up, a collection of 8-12 links at 0700GMT each day, posted here or available by email. You can sign up to receive each day’s Start Up post by email. You’ll need to click a confirmation link, so no spam.

5 thoughts on “A short history of Project Ara, in breathless headlines and sceptical observations”