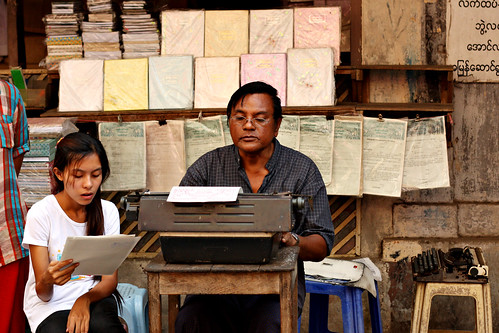 “Look, just type what I say, OK?” Photo by abrinsky on Flickr.

A. It appears that on or about August 28, 2016, unauthorized access was gained to our website server. The official Mac version of Transmission 2.92 was replaced with an unauthorized version that contained the OSX/Keydnap malware. The infected file was available for download somewhere between a few hours and less than a day. Additional information about the malware is available here and here.

Keydnap steals credentials from the OSX keychain (where system and personal passwords live). Yes, there is a certain irony in a Bittorrent client being subverted like this.
link to this extract

In Japan, each farm has its own classification standard and there’s no industry standard. At Makoto’s farm, they sort them into nine different classes, and his mother sorts them all herself — spending up to eight hours per day at peak harvesting times.

“The sorting work is not an easy task to learn. You have to look at not only the size and thickness, but also the color, texture, small scratches, whether or not they are crooked and whether they have prickles. It takes months to learn the system and you can’t just hire part-time workers during the busiest period. I myself only recently learned to sort cucumbers well,” Makoto said.

Distorted or crooked cucumbers are ranked as low-quality product

There are also some automatic sorters on the market, but they have limitations in terms of performance and cost, and small farms don’t tend to use them.

Makoto doesn’t think sorting is an essential task for cucumber farmers. “Farmers want to focus and spend their time on growing delicious vegetables. I’d like to automate the sorting tasks before taking the farm business over from my parents.”

Wonderful story.
link to this extract

With the ubiquity of mobile devices like smartphones, two new widely used methods have emerged: miniature touch screen keyboards and speech-based dictation. It is currently unknown how these two modern methods compare. We therefore evaluated the text entry performance of both methods in English and in Mandarin Chinese on a mobile smartphone. In the speech input case, our speech recognition system gave an initial transcription, and then recognition errors could be corrected using either speech again or the smartphone keyboard.

We found that with speech recognition, the English input rate was 3.0x faster, and the Mandarin Chinese input rate 2.8x faster, than a state-of-the-art miniature smartphone keyboard. Further, with speech, the English error rate was 20.4% lower, and Mandarin error rate 63.4% lower, than the keyboard. Our experiment was carried out using Baidu’s Deep Speech 2, a deep learning-based speech recognition system, and the built-in Qwerty or Pinyin (Mandarin) Apple iOS keyboards. These results show that a significant shift from typing to speech might be imminent and impactful.

That’s a big difference. But do you really want people burbling away to their phone with their Facebook update?
link to this extract

wouldn’t it be neat if emotions could be decoded? If there was an app out there that could analyze human interaction and stop us from acting on assumptions?

Beyond Verbal is trying to tackle this mammoth problem. Its tech allows developers to understand people’s moods, attitudes, and emotional characteristics in real-time, as they speak.

“We envision a world in which personal devices understand our emotions and well-being, enabling us to become more in tune with ourselves,” explains Yuval Mor, CEO of Beyond Verbal. “Understanding emotions can assist us in finding new friends, unlocking new experiences and, ultimately, helping us understand better what makes us truly happy.”

The startup’s software can be integrated into existing products, helping devices and applications envision not just what users type, click, or touch, but also how they feel and what they mean.

I’m sceptical; it’s hard to measure what verbal signals mean, even harder to interpret non-verbal signals. Humans aren’t always good at it.
link to this extract

The €13bn bite • The Economist

America criticised the [EC ruling against Apple’s Irish tax arrangements], calling it “unfair”. It had warned that it might retaliate in some way if Brussels went ahead. It argues that the commission is trying to turn itself into a “supranational tax authority”, threatening the consensus achieved through BEPS on the crucial “arm’s-length principle” at the heart of transfer-pricing rules. These govern the prices that subsidiaries of a multinational in different countries charge each other for the products and services that flow between them.

The Americans are fretting mainly because the ruling signals that Europe will lay claim to some of the more than $2 trillion of profits that American firms have amassed offshore, under the deferral provisions. Policymakers in Washington believe only the federal government has the right to tax this, as and when it is brought home. The Brussels decision may spur American politicians to set aside their differences on tax reform and agree on a package with a reduced tax rate for profits that firms repatriate; better that than to let Europe dip into the offshore pot, they think.

Apple has allowed for this tax in its accounts – whether to be paid in the US or to Europe. The Economist nails this: the row now is over whether the money goes to European countries or to the US, not the principle of whether profits should be taxed.
link to this extract

The court decided to award enhanced damages in this case because of egregious behavior on behalf of Samsung, including attempts to copy the technology and demonstrably false testimony given by Samsung. For example, Samsung’s representatives testified under oath that they only became aware of Imperium IP’s patents in June 2014, when the infringement action was first brought to court. Depositions and other discovery proved this to be incorrect. One witness who worked at ESS Technologies, the company to which the ‘884 patent was first assigned, testified that Samsung sought specific information on anti-flicker and flash technology. It was also proven that Samsung had previously attempted to purchase the patents-in-suit from Imperium, concealing its identity through a patent broker. Instead of June 2014, the court found that Samsung knew about Imperium’s patents since at least April 2011.

Samsung’s egregious conduct also included its failure to produce relevant documents. Although Samsung was aware since July 15th, 2015, about the need to produce e-mail and documents relevant to the patent broker used by Samsung to conceal its identity, those documents were only produced at 2:19 AM on the fourth day of the jury trial. As the court noted, the time to produce these documents was during discovery, not during trial.

Awkward. Technologies used in the Galaxy Tab 7 and 7.7 tablets, ATIV laptop and network-connected cameras.
link to this extract

The decline of the worldwide tablet market is set to continue for the remainder of 2016 as year-over-year growth reaches an all-time low of -11.5% and shipments of 183.4 million units, according to forecast data from the International Data Corporation (IDC) Worldwide Quarterly Tablet Tracker. Positive growth is set to return in 2018 and continue through 2020 with shipments reaching 194.2 million tablets as detachable tablets continue to steal share from traditional PCs.

“Appealing to the commercial audience will be key as detachable tablets aim to take a larger piece of the traditional PC market,” said Jitesh Ubrani, senior research analyst with IDC’s Worldwide Quarterly Mobile Device Trackers. “Windows and iOS already have solid detachable offerings and with the latest version of Android, Google will also have a horse in the race as they finally offer better multitasking support and added security features.”

Then again, five-year forecasts are for the optimistic.
link to this extract

Poles, as it turns out, seethe with operatic drama. They are creosote-soaked, 40-foot-high wooden battlegrounds. And, right now, a handful of companies — the usual villains in the internet access story — is very interested in keeping the status quo in place by quietly making sure that access to these vertical conflict zones is fraught with difficulties.
Chattanooga, again, was lucky. It has a city-owned electric utility that controls its own poles, so the city can use the utility to carry out its fiber dreams. That’s allowed Chattanooga to reap the benefits of roughly $1 billion in the form of new jobs and other spillover effects the city has seen since 2011.

But many cities don’t control their own poles. In some areas, poles are controlled by utilities, or even telecom companies. Anyone hoping to string fiber in those places faces two nightmarish, indefinite periods of delay and uncontrolled costs: first getting an agreement in place with the pole owners, and then getting the poles physically ready for a new wire. We’ll call these steps Swamp One and Swamp Two.

Much the same applies in Britain: BT had the state monopoly on poles and is only reluctantly being forced by Ofcom to let other companies use that infrastructure that it was given effectively for free on privatisation.
link to this extract