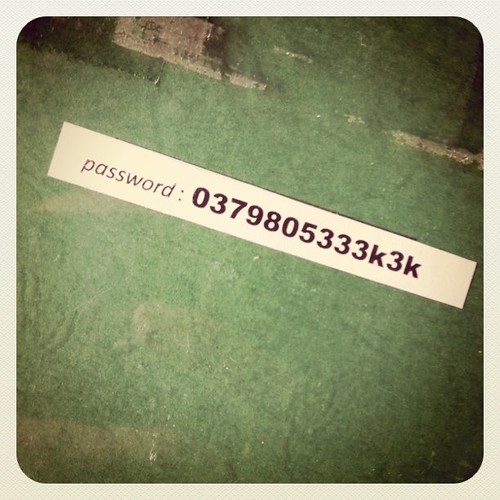 OK, this might be tougher, but most passwords are a lot easier to crack. Photo by WindKoh on Flickr.

I exchanged an email with a friend who is trying to get a mobile app business off the ground. I told him that he and his team are attempting to do something that is hard and has gotten a lot harder in the past few years.  He replied that he is looking for a way to break through. I encouraged him and wished him well.

This morning I did something I do on a regular basis. I went through the iOS and Android app store free app leaderboards looking for non-game apps that have broken into the top 100 and stayed there for months. I could not find any. It’s possible that I missed something. My technique is not scientific. I just browse and use my memory, which is not exactly a foolproof method. There are better ways to do this but I like to do it this way.

I think launching a consumer focused mobile app and getting sustained traction (>1mm MAUs for six straight months), is almost impossible right now. That doesn’t mean it can’t be done. I am sure there will be exceptions that will prove the rule.

Yup. The mobile app business has commoditised at amazing speed. The bigger the user base, the faster it happens.
link to this extract

In the past, Google API changes have resulted in YouTube no longer working on older Apple TVs and other devices running previous OS versions. 50 Sony BRAVIA TVs models released in 2012 are about to loose support for YouTube playback due to recent changes made by Google.

Many owners of affected sets have reported that watching videos through the “New YouTube on TV” app has resulted in black screens, freezes, and halted playback. A hardware bug or defect is not the cause of the issue, but rather a specification change made on Google’s end that “exceed the capability of the TV’s hardware.”

Sony is removing the YouTube icon and making the app unavailable staring September 30. 50 different models ranging from 20 to 89-inches across the EX, HX, and X series will be affected by the removal. Head to Sony’s support site for the full list of models. Buying a Chromecast or other streaming stick is a quick and easy way to regain YouTube playback and get access to other smart TV features.

Sony does not cite the exact specification change, but Google recently announced that all YouTube connections will soon be encrypted with HTTPS.

Suveer Kothari, Google’s head of global TV distribution, said this launch was “the beginning of a long journey” for the company’s TV ambitions in Europe.

“We think there’s going to be huge benefits from bringing the internet to TV. Google TV attempts to address the problem that there’s not really a great experience to access the internet on your TV screen, which is a similar problem we saw in the smartphone market five years ago.”

William Melicher and others at Carnegie Mellon:

We show that neural networks can often guess passwords more effectively than state-of-the-art approaches, such as probabilistic context-free grammars and Markov models. We also show that our neural networks can be highly compressed—to as little as hundreds of kilobytes— without substantially worsening guessing effectiveness. Building on these results, we implement in JavaScript the first principled client-side model of password guessing, which analyzes a password’s resistance to a guessing attack of arbitrary duration with sub-second latency.

The slides are quite scary too. (Thanks Pete for the link.)
link to this extract

I ask how he is adjusting to life as a bankrupt. “I go on the subway into the office,” he says, in a mid-Atlantic accent that betrays his years in the US. “I look around at people and probably 80% of them are worrying about what would happen to them if they didn’t get their next pay cheque. Or they are worrying about how they are going to meet their rent in this incredibly expensive city.” He puts on his sunglasses. “It helps put things into perspective.”

Our lobster bisques are promptly delivered to our table. I mention that he seems happier than when I saw him at Gawker’s wake. “I can’t afford to be that affected.” Gawker’s fate was “predestined”, he says, “the end-product of having made a decision early on to give writers freedom and encouragement to say what was on their minds”.

That seems like a stretch when you think that it was a sex tape featuring a wrestler with a tan the same colour as our soup that triggered Gawker’s downfall. But Denton continues, insisting that the site never shied away from covering anyone — no matter who they were. The alternative, he says, would have been “to be a media company like all the others”.

OpenOffice, after years of neglect, could shut down • Ars Technica

In July, OpenOffice issued an advisory about a security vulnerability that had no fix. The problem could let attackers craft denial-of-service attacks and execute arbitrary code. One of the workarounds suggested by the OpenOffice project was to use LibreOffice or Microsoft Office instead. A patch for that problem that can be applied to existing versions of OpenOffice was released in late August, but concerns about fixing future security problems remain.

Though the vulnerability didn’t become public until recently, [OpenOffice vp Dennis] Hamilton wrote that the problem and a proof of concept was reported to the OpenOffice team just as version 4.1.2 was about to be released. Developers figured out a source code fix in March this year, but “we were sitting on the fix because we didn’t want to give anyone ideas when they saw it applied to the source code unless there was a release in the works,” Hamilton wrote.

Kirk McElhearn takes us to the zone of weirdness that is “Brilliant Pebbles”, which allegedly improve the sound of your hi-fi. How?

The original glass bottles for Brilliant Pebbles have been replaced by clear zip lock bags, which have a more linear response than glass. We employ a number of highly-specialized, proprietary techniques in the preparation/assembly of Brilliant Pebbles to enhance the crystals’ inherent characteristics.

Plastic certainly has a more linear response than glass. Paper bags might be more efficient still. Or no bags at all.

The fundamental operating principle of Brilliant Pebbles involves a number of atomic mechanisms in the crystals. Brilliant Pebbles will enhance the performance of your audio system so your favorite music and even your experience playing online fantasy games will become a mind blowing auditory experience.

Is the Google Car in trouble? • Autocar

Perhaps one of the reasons for [Google Car project leader Chris] Urmson’s exit was the Google Car project’s philosophical U-turn performed last September, with the hiring of ex-Hyundai US boss John Krafcik as CEO of the Google self-driving project. Google has also just signed a deal with Fiat-Chrysler to build autonomous prototypes based on the company’s Chrysler Pacifica MPV, all of which suggests that any idea that Google would put its own self-driving cars into production now looks increasingly unlikely.

Perhaps such a tie-up with the car industry was inevitable. Despite the time spent on testing and development, the Google self-driving cars had covered a relatively modest 1.7m miles as of this summer. In stark contrast, Tesla claimed that, by May this year, drivers of its cars had clocked up 100 million miles with the Autopilot function engaged. While this is nowhere near the same as the intended full autonomy of the Google cars, it shows the huge disadvantage of trying to jump straight to a fully autonomous car from experimental vehicles.

Furthermore, not only do the Google cars have a selfimposed 25mph top speed, it took until 2011 for fully autonomous testing on public roads to become legal in the US, when Nevada changed its local laws. California — Google’s home state — didn’t change the law until this year. It is still only legal in four states.

In trouble? More likely it’s shifting its focus, as the hire of Krafcik implies – away from a “make it ourselves” model, towards a “license it out” model.
link to this extract

Back in September, a design student posted a design fiction video of Phonebloks, a modular phone platform. It got a lot of attention, but I counted myself among numerous skeptics of the design, given how much size and weight would be added and the unrealistic sizing of the imagined modules.

During October’s Dutch Design Week in Eindhoven, I had the chance to chat with aforementioned student, who seemed more interested in his small-scale plastic recycling project. It did not take long to confirm that he was an “idea guy”, not to be bothered with the realities of implementation; that’s for the magician engineers to work out. My skepticism was confirmed.

But that same week, Google Motorola (no slouch of engineering) announced Project Ara, which is basically the same concept, and “partnered” with Phonebloks to share in the attention.

Anosognosia (/æˌnɒsɒɡˈnoʊziə/, /æˌnɒsɒɡˈnoʊʒə/; from Ancient Greek ἀ- a-, “without”, νόσος nosos, “disease” and γνῶσις gnōsis, “knowledge”) is a deficit of self-awareness, a condition in which a person who suffers some disability seems unaware of the existence of his or her disability.

The rest of Gerwitz’s post nails Ara, two years ahead of its death. (And ahead of my post on its death.)
link to this extract

Worldwide smartphone shipments are expected to reach 1.46 billion units with a year-over-year growth rate of 1.6% in 2016 according to the latest forecast from the International Data Corporation (IDC) Worldwide Quarterly Mobile Phone Tracker.

Although growth remains positive, it is down significantly from the 10.4% growth in 2015. Much of the slowdown is attributed to the decline expected in developed regions in 2016, while emerging markets continue with positive growth. Developed markets as a whole (United States, Canada, Japan, and Western Europe) are expected to see a compound annual growth rate (CAGR) of -0.2%, while emerging markets (Asia/Pacific excluding Japan, Central and Eastern Europe, Middle East and Africa, and Latin America) will experience a CAGR of 5.4% over the 2015-2020 forecast period.

“Growth in the smartphone market is quickly becoming reliant on replacing existing handsets rather than seeking new users,” said Jitesh Ubrani, senior research analyst with IDC’s Worldwide Quarterly Mobile Device Trackers. “From a technological standpoint, smartphone innovation seems to be in a lull as consumers are becoming increasingly comfortable with ‘good enough’ smartphones. However, with the launch of trade-in or buy-back programs from top vendors and telcos, the industry is aiming to spur early replacements and shorten lifecycles. Upcoming innovations in augmented and virtual reality (AR/VR) should also help stimulate upgrades in the next 12 to 18 months.”

IDC in June forecast that growth would be 3.1% for the year, so this is quite a cut already. The premium market (developed countries) is saturated; all that’s left for growth, for now, is the low-end business.
link to this extract