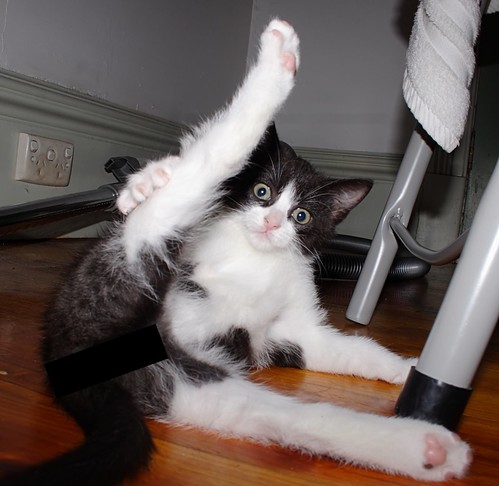 “You’re classing this as not funny, right? RIGHT?” Photo by .robbie on Flickr.

We’re back! Don’t forget you can sign up to receive each day’s Start Up post by email. Then again, who’ll keep the web alive if you’re just reading email?

How to ban the banner ads from Panasonic Smart TVs » CNET

When I reviewed the Panasonic TC-PVT50 series, I was annoyed to see that the latest software update caused a banner ad to appear for a few seconds whenever I turned on the TV. It disappeared quickly and only popped up upon power-on, but it was still obnoxious. The first thing I wondered was whether I could turn it off.

Happily, Panasonic built in a way to disable the advertising. It’s a simple, albeit buried, menu command. Here it is in a nutshell.

Five steps. But as I learnt on Twitter, Panasonic is also doing this for changes in volume on its Viera sets. And apparently Samsung does a version of the same annoyance.

Incredible that any hardware vendor would think people would welcome ads in that form.
link to this extract

Arjun Chandrasekaran from Virginia Tech and pals say they’ve trained a machine-learning algorithm to recognize humorous scenes and even to create them. They say their machine can accurately predict when a scene is funny and when it is not, even though it knows nothing of the social context of what it is seeing.

Psychologists have a relatively poor understanding of the mechanisms behind humor. Most theories of humor suggest that its key components are qualities such as unexpectedness, incongruity, pain, and so on. When one or all of these elements are present in sentences, pictures, and videos, the chances of raising a smile are increased.

Chandrasekaran and co limit their study to pictures. And to keep things simple, they confine themselves to pictures created with a clip art program. This contains 20 “paper doll” human models of various ages, genders, and races with moveable arms and legs and eight different expressions. It also contains 31 animals in various poses and around 100 indoor and outdoor objects such as doors, windows, tables, sun, clouds, trees, and so on.

A key part of any machine-learning process is creating a database that contains good examples of the thing the algorithm has to learn. This is no easy task, particularly when it comes to something as subjective as humor.

The team tackles this by asking workers on Amazon’s Mechanical Turk service to create funny scenes using the clip art program, along with a short sentence describing why they think the scenes are funny. They also asked these people—turkers, as they are called—to create unfunny scenes.

You can read the paper on Arxiv. Do we trust Turkers to do humour?
link to this extract

Kinect-like motion sensing comes to your phone » Tech in Asia

According to [Extreme Reality], the Israeli startup, the software allows any kind of camera-enabled device to analyze a person’s body in 3D and perceive that person’s movements, enabling motion sensing and control for “any computing device or operating system.”

Extreme Reality highlights some diverse applications of its technology. Game developers X-Tech and Kokonut Studio have used it to enable motion control features in their mobile games, Snowball Effect and Sky Hero respectively. The player can simply place the phone or tablet on a table, step back, and control the games with their body.

It may not sound like the most attractive proposition – motion control games never did quite manage to bridge functionality and fun, and I haven’t tested this particular game to say for sure if it works or not. However, it’s impressive because just a few years ago, you had to buy an Xbox console with the Kinect accessory to do something like that.

The Technology Research Center at Finland’s Turku University has put the tech to use in research for exercise applications for the elderly. Titled Perceptions of the elderly users of motion tracking exergames, the research used Extreme Reality’s technology instead of spending money on expensive 3D cameras and sensors.

Other possible applications include education, marketing, and more, the startup says.

“Possible applications” always include marketing, because there’s always some idiot who thinks there’s a way to use a new idea to push ads or branding. But motion tracking just doesn’t have a clear use; the Kinect demonstrated that.
link to this extract

(Fujitsu + Panasonic Semi) introduces “M-12MO” (MBG967) Milbeaut Image Processor. The MBG967, which will be available in volume shipments starting in January, is mainly targeted at smartphones and other mobile applications. It supports dual camera, the latest trend in mobile applications, along with functionalities such as low light shot and depth map generation. The expansion of dual camera capabilities in the mobile camera market has been highly anticipated because dual cameras enable new functionalities previously considered difficult with mobile cameras. These include low light shot, which integrates images from color and monochrome sensors, and the generation of depth maps, which can create background blur comparable to that of SLR cameras.

Coming soon to a smartphone near you, for sure.
link to this extract

Apple has registered a trio of auto-related top-level domain names, including apple.car, apple.cars and apple.auto. Whois records updated on January 8 show that Apple registered the domains through sponsoring registrar MarkMonitor Inc. in December 2015, although the addresses are not yet active.

Pretty convincing. Only a question of how long now.
link to this extract

According to the quarterly sector statistics report by the Communications Authority of Kenya (CA), at the end of the quarter, mobile penetration stood at 88.1% with 37.8million subscribers up from 36.1 million in the previous quarter.

The report shows that pre-paid subscriptions continue to dominate the mobile telephony sector, registering 36.8 million subscribers, accounting for 97.3% of the total subscriptions. Post-paid subscriptions saw a marginal increase to 989,889 up from 963,684 in the previous quarter.

Other considerable gains were recorded in the Internet/data market, which has registered 21.6 million subscriptions up from 19.9 million in the last quarter.

Almost all of the internet subscriptions – 21.5m – are mobile data, out of an estimated total 31m internet users in the country. Also note:

You can see the full report.
link to this extract

How to talk to your Mom about AI » LinkedIn

Dennis Mortensen, founder of x.ai (which does the fantastic “Amy” helper app):

I tend to classify services as either Vertical or Horizontal AI.

Companies like textio, Automated Insights, and ours, have taken on a single problem. These services are laser-focused on executing one job—whether that’s optimizing job listings, writing data-based stories, or scheduling meetings.

I consider these Vertical AI. These agents promise no more and no less than to perform one job for you and to do it so well, you might even mistake them for a human.

In contrast, M, Cortana, and Siri are extremely expansive generalists (which is not to say this is not fantastic technology, because it is!). There’s no single use case, no single “job-to-be-done.”

They function more as massive question and answer settings (“What is the time in Berlin?”) or request, immediate-action settings (“Set my alarm for tomorrow morning 08:00 AM!”).

I see these as Horizontal AI.

Useful distinction. Expect to hear a lot more about AI this year.
link to this extract

If you were at CES, you could see water bottles with screens, alarm clocks with smell, robots with video projectors, underwear that’s smart, and a tablet/refrigerator. That would have been all on one day. Yesterday.

He puts it elegantly, and you don’t need to read anything else about CES once you’ve read his take.
link to this extract

Piece of the puzzle : Chromebooks in the US and the rest of the world » Naofumi Kagami

The reason is clearly stated in the article:

The main issue with these countries is that they do not have the required broadband infrastructure to support the cloud-based storage requirements of Chromebooks.

We often only look at the flashy devices that we use, made by the most powerful tech companies in the world; Google, Microsoft and Apple. We often forget that to make these devices work, we need a lot of infrastructure. We also forget that WiFi can be very, very expensive when you want to deploy a network capable of handling hundreds of simultaneous connections. We forget the infrastructure because unless you have to dealt with it directly, it is invisible.

This is something to keep in mind.

• Google exists only because broadband Internet access is cheap. Its business model and its data collection relies on the infrastructure of vast network of Internet equipment that most people in developed countries now take for granted.
• Amazon exists only because of a highly developed and inexpensive network of deliveries to your doorstep. This was not common 30 years ago in Japan, and I assume, most other countries.
• Microsoft and Apple built their businesses before this infrastructure. They have business models that work without it.

Thinking the rest of the world looks just like the view outside your window is such an elementary mistake, but pundits make it again and again.
link to this extract

Fitbit either doesn’t understand Apple Watch or hopes you won’t; neither is good » Forbes

In announcing its own smartwatch, Fitbit directly acknowledged that Apple is competition but it appears to have shown up to a Swiss Army knife fight with a spork . Fitbit CEO James Park seems to think his simpler device — which is limited to fitness tracking, heart-rate monitoring, and a few other functions — is just what the market ordered. Park told the Financial Times: “People have struggled with what the killer app is for smartwatches. For us it’s health and fitness. It’s really cumbersome on the Apple Watch sometimes to see what is my daily activity because they are trying to do so many things.”

In two sentences, Park makes three pretty fundamental errors about the state of wearables today and how they are likely to progress. Let’s break them down one at a time.

Rogowsky skewers Fitbit (or its PR spin) thoroughly here; the stock market seems to have seen through it too, driving down Fitbit’s shares by 20% on seeing its clunky product.

Meanwhile, my estimates for Android Wear activations (based on Google Play data) suggests they crept past 3m just before Christmas, and now stand at 3.1 million. There wasn’t a big bump in activations over the holidays; I calculate they’re rising steadily at about 47,000 per week, or 0.5m per quarter.

That, in turn, would suggest – unless something changes – that Android Wear won’t pass the 5m downloads point on Google Play before September this year.
link to this extract

(Wondering where Apple Music hitting 10m, and Spotify saying “huh” is? I’ll post on that separately, as I’ve got some separate data not covered in those stories.)

Errata, corrigenda and ai no corrida: none so far for 2016!