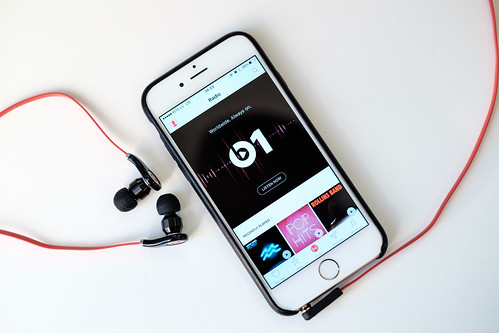 Beats1: listen for free. Photo by Janitors on Flickr.

Here’s a thing: substantially more people in the US are using Apple’s Music app since the launch of Apple Music at the end of June.

I’d already noticed this last week, but coincidentally on Sunday Apple let it be known that Apple Music now has passed 10 million (paying) subscribers. That’s up from 6.5m in October.

(As an effort to provide a counterpoint, Tech Insider said that Apple had claimed 11m trial subscribers back in August, so nyaaah. Except on reflection, that’s not surprising: many more will have signed up and dropped out.)

Spotify, not impressed, responded that it had had its “fastest subscriber growth ever” in the second half of 2015. Tech Insider ran the numbers, which would mean 5m new paying subscribers, and perhaps put it at 25m-30m paying subscribers.

But anyway, let me put in my chunk of insight. Which of course goes against the general punditry that Apple Music is rubbish, worse than Spotify, etc. This is the trouble with punditry: it tends to be myopic and ignore what lots of people actually do. (Sure, Apple Music’s interface and general paradigm can be confusing: what’s “my” music and what’s “Apple’s” music? Why are they different? That’s a result of the challenge of migrating people used to “download and own” to “stream and never own”.)

Wo-o-oah, listen to the Music

The data comes out clearly from the latest ComScore data surveying phone use, which takes us up to November 2015. ComScore monitors which apps people use on their phones during each month; the top ones, as you might expect, are Facebook, YouTube and Facebook Messenger. ComScore lists the top 15 (for iOS and Android – neither of the other two platforms has large enough user bases to be relevant) and you can work out the absolute numbers using a service, as well as the percentage, quite easily.

I’ve been collating the ComScore data for a long time, and the jump in Apple Music users since the service’s launch on 30 June is very noticeable. To make sure it’s not some weird artefact of its collection, I’ve compared it with another iPhone-only service, Apple Maps.

And the absolute numbers:

There’s a general trend upwards in both services, but that’s also the same for Google Maps – in the same period from July 2013 to November 2015 its user numbers have gone from 61m to 91.1m, though with seasonal dips.

The absolute numbers for Apple Music are pretty impressive: they rose immediately from 46.8m users in June 2015 to 57.5m in July. In November, which is past the three-month trial period (if you’re trying the paid-for streaming service) it was 59.7m.

On that basis, it looks like Apple Music has got around 10m extra people using the Music app more regularly. That doesn’t mean that they’re necessarily paying for it; you can listen to Beats1 Radio for free, for example.

And there may be lots of people who are rolling into and out of the three-month unpaid trial. (I’m definitely not suggesting they’re all paying subscribers – that doesn’t make any sense.)

But the ComScore data looks like substantially more than a statistical blip. (I can’t tell whether iTunes Radio, launched in the US in September 2013 and later in Australia, made any difference; ComScore didn’t collect the Music app data back then.)

Apple’s going to keep adding subscribers, too; it has passed 1m downloads on Google Play, and some of those are sure to stick.

What about the others?

What about other music services? Pandora is the most used service on ComScore’s data, with between 77m and 80m users across both iOS and Android in the same period; it doesn’t vary much.

Spotify doesn’t figure in the top 15 apps via ComScore, and never has; that means it must have fewer paying (and so mobile) users in the US than Snapchat, which has made a couple of appearances in the top 15 with about 22m monthly active users. But since we’ve already seen that Spotify’s worldwide paying user base (who are the only ones who can get it on mobile) has only just hit that figure, that’s not surprising.

This isn’t a fair comparison for Spotify, though: both Pandora and Apple’s Music app have free elements (you can just be using the Music app to listen to your own music, while Pandora offers free streaming in the US). It’s quite possible that it has a few million users in the US; its repeated appearance in the top-grossing charts for the US suggests it is getting some useful subscription moolah.

At the same time, that jump in Apple Music users does point to something else which the numbers above already point to: the streaming business can be additive – it’s not limited to the small numbers who are using it now. Apple has added 10m paying subscribers to the pool in six months, and Spotify has added perhaps another 5m. For music, that has to be good.

If the labels could be persuaded to lower their prices, it might expand the paying audience for streaming services even further. Though the enemy to that is always YouTube, the giant elephant in the streaming room, used by millions to get their music fix for free. (Read Mark Mulligan on this; it’s truly quite scary for those used to the old world of the music labels.)

Until the music business figures out what it wants to do about YouTube, persuading people to pay for streaming in substantial numbers will continue to be a struggle. But it can be done.