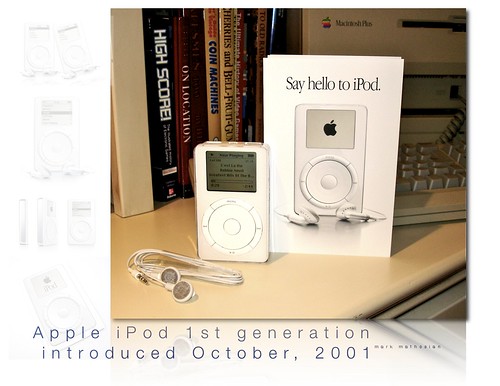 (Just over) 14 years ago… evolution, revolution or just another MP3 player? Photo by MarkGregory007 on Flickr.

A selection of 9 links for you. Yes, I know if you’re reading this in the US it’s an hour earlier than usual – that’s because we’ve finished British Summer Time before you. I’m charlesarthur on Twitter. Observations and links welcome.

Adblock Plus and (a little) more: Smells like censorship, Big Brother » AdBlock Plus

Eyeo, which runs Adblock Plus, has been accused of behaviour tantamount to blackmail by saying it will allow “acceptable ads” from some sites that pay it money. Axel Springer in Germany, meanwhile, decided to institute an “non-paywall” which would prevent people using an adblocker from seeing its content on Bild.de etc. Then:

One of the independent moderators of our free and open forum discussed a workaround to the Bild.de blockade, because they still wanted to access the site. Basically, they just talked about how to write a specific filter that users could add to their ad blocker to get around “Axel’s Wall.”

Last week, Axel Springer demanded that we take down those forum posts, in effect demanding that we censor what people had written on our own forum. Our response basically channeled former basketball player/current journalist Jalen Rose: Nah … not gonna be able to do it.

Just a few minutes ago, a court in Hamburg served us with papers FORCING us to remove these specific forum posts. Apparently Axel Springer felt so strongly that they went to a court to get people to stop saying things they didn’t like. This is not without precedent: this week they sent a YouTuber a similar order after he decided to make a video describing how to circumvent …. the Wall.

Damn you, Internet Archive.
link to this extract

Fabulous comment thread from Macrumors, including those calling it “Cube 2.0” (the Cube computer was killed after a year), and this from “WeezerX80”:

I still can’t believe this! All this hype for something so ridiculous! Who cares about an MP3 player? I want something new! I want them to think differently!

Why oh why would they do this?! It’s so wrong! It’s so stupid!

Tons more fun to be had. Sadly, Weezerx80 stopped posting there the same day, so we’ll never be able to ask him what he thought of the outcome. (Via Greg Koenig.)
link to this extract

During my last few years I spent a lot of time working closely with AppleCare on customer Wi-Fi and networking issues: poring over user trouble reports, sitting down at call centers and listening in on calls, and generally doing everything I could to improve the user experience of Wi-Fi for Apple users.

I failed. It may have been possible to succeed, but the structure of the various teams working on Wi-Fi and networking at the time made it a seemingly insurmountable challenge. This current situation makes it clear to me that there are still forces inside of Apple which prevent any kind of real, comprehensive solution from being implemented. Balkanization, poor management and some uninformed decisions by executives contributed to the problem; and as I’m all to human, my own limitations and personal struggles played a large part. But it didn’t have to happen this way, and it doesn’t have to continue.

Lots of fascinating nuggets in this, including

“when a user calls the vendor of their Wi-Fi access point, nearly the entire profit margin for that box is destroyed by the end of the call.”

Last year, Xiaomi gave itself the goal of selling 100m phones in 2015. That seemed ambitious, but not outside the realm of possibility, especially after the fast-growing company finished 2014 having shipped more than 60m units after having originally projected only 40m sales.

2015 has not gone nearly as well, though. By March, Xiaomi CEO Lei Jun had revised this year’s goal to 80m to 100m units. In July, the company announced that it had sold 34.7m smartphones in the first half of the year, putting it on track to possibly miss even the lower end of Lei Jun’s revised target.

Now, there are additional signs that even 80m might be optimistic. Taiwan-based research firm Trendforce just released a report suggesting that Xiaomi is on track to sell around 70m smartphones this year. Meanwhile, research firm Canalys is saying that Xiaomi’s sales in the third quarter of this year actually dropped year-on-year, the first time that has happened.

What’s disrupting Xiaomi? Probably just the slowdown in the Chinese market, which is happening faster than its ability to expand into new markets. Hence it offering products such as a cheap 4K TV (China only, sadly).
link to this extract

The Register’s Kieren McCarthy filled out the form, which has questions such as:

The project would use a combination of traditional news gathering skills and modern communication tools to gather data around a range of practices performed by internet search engine giant Google, in an effort to expose potential wrongdoing or abuse of market power.

In particular, the project would focus on:

• The skewing of search results.
• The tracking of right-to-be-forgotten requests performed by Google.
• The size, breadth, and impact of Google’s news service on online news sites, looking in particular at the phenomenon of stories written specifically to gather Google News traffic and any possible negative impact on quality journalism due to biases in the Google News algorithm.
• A logging and policy-tracking service to discern the impact of Google lobbying activities on policies and laws developed in Washington DC.
• An open source complaints system focused on gathering early warning signs of abuse of market power by Google.
• A “revolving door” service that specifically tracks current and former Google employees to identify how informal social networks may be used to influence public policy.

Looking to fund three staff. One to watch for sure.
link to this extract

Should we trust the young Turkers? » Tim Harford

“The majority of papers presented at the conferences I go to now use [Amazon’s Mechanical] Turk [which lets you hire people online to complete tasks],” says Dan Goldstein, a cognitive psychologist at Microsoft Research. Goldstein, an academic who has also worked at London Business School and Columbia University, has used MTurk in his own research, for instance, into the impact of distracting online display ads.

This stampede to MTurk has made some researchers uneasy. Dan Kahan of Yale Law School studies “motivated reasoning” — the way our goals or political opinions can influence the way we process conflicting evidence. He has written a number of pieces warning about the careless use of the Amazon Turk platform.

The most obvious objection is that Turkers aren’t representative of any particular population one might wish to examine. As an illustration of this, two political scientists hired more than 500 Turkers to complete a very brief survey on the day of the 2012 US presidential election. (Tellingly, the entire survey cost the researchers just $28 and the results arrived within four hours.) The researchers, Sean Richey and Ben Taylor, found that 73% of their Turkers said they had voted for Barack Obama; 12% had voted for “other” — compared with 1.6% of all voters. Mitt Romney polled vastly worse with the Turkers than the US public as a whole. Relative to the general population, Turkers were also more likely to vote and be young, male, poor but highly educated. Or so they claimed; it is hard to be sure.

There are all sorts of reasons not to trust Turk-sourced studies, and only a few in favour of them.
link to this extract

Microsoft rolled out a new way to report earnings with its first quarter, 2016 earnings on Thursday.

The previous structure had two major units (commercial and consumer) and broke out a few different businesses in each of those.

As you can see, under the old scheme, all business units shrunk except two:

Phone hardware down 54% to $1.1bn, computing and gaming hardware (Xbox, essentially) down 13% to $2bn; only “Device and Consumer Other” (Bing, MSN, Office 365, video games, app store) and “Commercial Other” (cloud services) showed growth. The puzzling thing is how Microsoft’s shares would move up on something like this.
link to this extract

The polarization between high-end and mass market products in the Korean smartphone market is expected to accelerate with the iPhone 6S’s local debut.

At present, few smartphones ranging from 400,000 to 700,000 won (US$353 to $617) in price are available in the domestic market, except for the recently-released Samsung Galaxy Note 5 and LG V10. This is because the prices of existing high-end handsets have been reduced to 400,000 won or less by a cut in factory price and an upward adjustment of the subsidies. The prices of the Galaxy Note 5 and the V10 are predicted to be lowered in the near future, too.

This is certainly a trend – most Android phones are getting cheaper and cheaper, but Apple and a few others, are holding on to top-end pricing. South Korea is the sort of “end state” of the smartphone business; it’s super-saturated.
link to this extract

“So this was interesting. I started entering 999 QTY for the Priv at 10am today, and it told me they only have 965 available.

Later they figure out that it has sold 206 in six hours. Guys, is that good or bad?
link to this extract