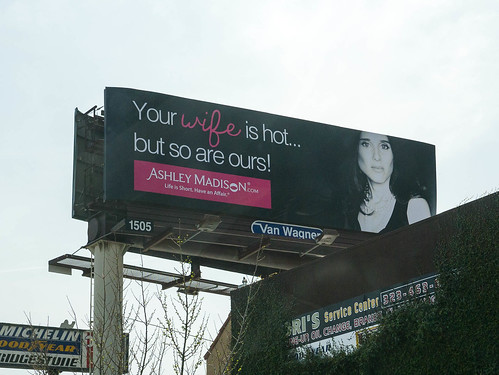 And we just happen by great good fortune to know a good source of women who aren’t wives too. Photo by James Maskell on Flickr.

A selection of 8 links for you. Tested on humans for irritancy. I’m charlesarthur on Twitter. Observations and links welcome.

After the details of roughly 33 million Ashley Madison accounts were posted online, the hackers responsible, known as Impact Team, leaked more than 197,000 private emails from the inbox of Noel Biderman, the former CEO of Avid Life Media (ALM), a Toronto, Canada–based company that operates the Ashley Madison site. Documents and emails contained in the trove and reviewed by the Daily Dot detail the company’s escort-related businesses.

Escorts.ca was leased in 2013 through a shell company called Pernimus Limited, which is listed among ALM’s “legal entities” on an internal company memo. According to a leaked contract, ALM leased the escort-service property from an Ontario-based company called Steeltown Marketing Inc., on Feb. 20, 2013.

The escorts.ca website was still active until roughly 6pm ET on Tuesday, when it was abruptly suspended. A version of the site from Aug. 1, 2015, can still be viewed, however, via the Wayback Machine.

Innocent explanation: ALM was into teh sexy bsns, so having an escort company as well as a “YOLO BE UNFAITHFUL” site was just consistent corporate thinking.

Malevolent explanation: 1) have a site encouraging guys to be unfaithful; 2) funnel them towards escorts 3) Profit!

Hang on, further down:

The document shows that ALM’s intention for the site, which did not charge users to browse its pages, was to funnel traffic to Ashley Madison and other ALM properties.

Having some trouble making the innocent explanation work here.

Marc Settle, who specialises in smartphone reporting for the BBC Academy:

Doesn’t time fly. It’s already a year since my now-traditional blog post examining what’s in the latest version of iOS, the operating system on iPhones and iPads. It’s also therefore a year since the equally traditional complaint of ‘preferential treatment’ to Apple over Android, the operating system that runs on around 80% of smartphones globally.

However, it remains the case that iPhones are the device of choice for many leading news organisations around the world – not just the BBC – for their employees to gather and send broadcast-quality footage at a far lower cost than traditional methods.

It’s also the case that this review of iOS 9 will be far more relevant, far more quickly, to iPhone owners if the pattern of previous releases is repeated. iOS 8 came out on 17 September 2014; a week later it was running on more than a third of compatible devices (as shown on the graph above).

In stark contrast, the latest version of Android, called Lollipop, was released in November 2014 but nine months later it’s still barely on 20% of devices.

Seems iOS 9 doesn’t add much, apart from some little tweaks in video editing. It has been noticeable in the latest reports on the refugee crisis that some of the BBC reporters are doing the reports with iPhones; one did a whole report using the front-facing camera and flash so that he could show the extent of the problem.
link to this extract

And lo, there was great consternation that YouTube might have found a way to make people view ads. But it turned out not to be:

Some users have been able to confirm, that removing YouTube app from Chrome (by navigating to chrome://apps on Chrome) fixes YouTube ads, which are not blocked.

According to the EasyList forum post on this topic (you can read the original Google Code issue if you’d like to know the gory details) it’s caused by a recent Chrome security update, not the ad blockers or YouTube finding a way around the current filters.

At this point, we’re waiting for news about another update to Chrome which will fix this. In the meantime, we recommend switching to Firefox or Safari, which continue to block ads in YouTube videos just fine

In the Chromium discussion, a Chromium developer says “It was a security fix tracked in bug 510802 which we can’t make public yet, but it has the details.” (I can’t find a way to view bug 510802, so maybe it’s a doozy.)

The top three global PC makers would be able to raise market share in the next few years through consolidation amid shrinking sales of personal computers, Dell Inc chief executive Michael Dell said on Monday.

The top three companies could corner about 80% of the market in the next five to seven years, Dell said at a roundtable conference with journalists in Bengaluru, India.

“In the first half of this year, we outgrew the two in notebooks and we have grown now 10 quarters in a row,” Dell said.

IDC last month forecast PC shipments to fall 8.7% this year, steeper than its earlier estimate of a 6.2% decline, and said they are expected to return to growth in 2017.

Presently those top three have 53%; it would take quite a consolidation (such as the collapse/withdrawal of a player like Acer with 6.5% share and a smaller one like Toshiba with maybe 3% share) to reach that. But the ongoing consolidation is steady.

Read it too for Dell’s comment on smartphones.
link to this extract

Imogen Heap: saviour of the music industry? » The Guardian

Jamie Bartlett on how one British artist aims to use blockchain technology to create an accountable system for buying and listening to and crediting music:

Because [Imogen] Heap now produces her own music independently she’s not contracted to release her song via the usual route. Instead, she will be placing the studio-recorded song, video, live performance and all Tiny Human-related data as files on her website, open to those developing new tech for the blockchain. All the taggable associated data that could interest fans or potential clients (film and TV, brands, other artists), such as the lyrics, photographs, the instruments she used, the musicians who played, etc (“I think I’ll add this article too,” she told me) will prove inspirational, she hopes.

Crucially, she’ll also include simple contracts, revealing under what terms the music would (ideally, as this is an experiment) be downloaded or used by third parties, such as advertisers, and how any money earned will be divided up among the creatives involved. All payment received – using crypto-currencies – will be routed to the recipients, as set out in the contract, within seconds. (It typically takes between weeks and months for royalty payments to work their way through the chain at the moment.)

It’s a long but worthwhile article. There’s a fair amount of handwaving around how it will work, though I suspect that’s just as much because really getting into the details of how the blockchain system would work might frighten the horses (as in, regular non-techie readers) too much.

And remember, MP3 started as a way to compress background music and sounds for video games.
link to this extract

Among the discussion of my post elsewhere on this blog is this anecdote:

My wife went into the EE shop (UK mobile company) recently to see what was on the market as her old Galaxy S2 was dying.

She came out with a list of six Samsung phones alone and a couple of Sonys. Is a Galaxy Alpha better than an S6? What’s a Galaxy Mini? So bewildered by the permutations that she just threw away the list and bought a second-hand Galaxy S4 on eBay. Potential sale for Samsung lost.

Android vendors might think they’re satisfying all possible market requirements but actually they’re confusing potential customers. As you say, probably easier just to go to the Apple store and choose between two.

I know anecdotes aren’t data, but I think the contrast between a plethora of choices and a couple makes a difference. Note too how few features Apple adds at each release. (Read the full discussion too.)
link to this extract

Joe Stewart of CTU Research on how an “attack” (lots of dislikes) against a YouTube channel might have been organised via hijacked routers in Vietnam:

All it takes to bounce traffic through a vulnerable broadband modem is to know the standard administrative username/password pair used by the ISP, something trivially obtained by analysis of the device’s firmware image or even by brute force scanners. Once you can configure the modem, you can set up port forwarding and relay traffic inbound to a specific TCP port to an outside site (i.e. YouTube). This isn’t a proxy in the conventional sense, where one can arbitrarily tunnel all HTTP traffic through another IP, but it can work in essentially the same way for a single destination site.

Vietnam is certainly not the only country with this problem. A rush to create broadband infrastructure in some countries where ISP choices are limited has led to a dangerous monoculture of vulnerable router deployments. As consumer operating systems are increasingly becoming more secure against exploitation that would cause them to become part of the botnet ecosystem, we are increasingly seeing broadband routers being abused for these purposes instead.

Why you hate Google’s new logo » The New Yorker

Now Google is so smart and powerful, across so many platforms—Androids, a translation service, Chrome, Maps, Earth, self-driving cars, our collective brain—that our trust, our connection to that first thrilling moment, that gratitude and excitement, should be essential to maintain. You’d think the company would get that, and that rebranding, generally, feels suspicious. When I see that shifty new rainbow-colored “G” bookmarked on my toolbar, I recoil with mild distrust, thinking of when Philip Morris became Altria — No cigarettes here, see? Just rainbows! — or when British Petroleum suggested we think of it as Beyond Petroleum, or when the Bush Administration would name something Freedom.

Zingg! (Personally, though, I don’t like the new logo. I prefer the old one.)
link to this extract