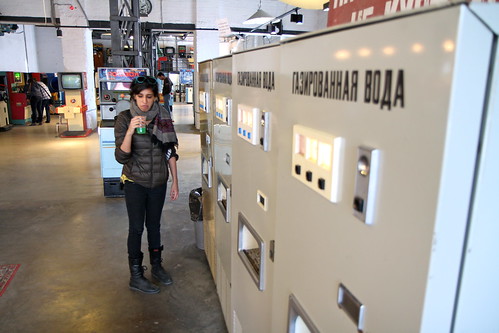 A drinks machine in the Soviet arcade museum. OK, back to work! Photo (and many more) by jasoneppink on Flickr.

A selection of 9 links for you. Do not feed. I’m charlesarthur on Twitter. Observations and links welcome.

An attacker stole security-sensitive vulnerability information from the Mozilla’s Bugzilla bug tracking system and probably used it to attack Firefox users, the maker of the open-source Firefox browser warned Friday.

In an FAQ published (PDF) alongside Mozilla’s blog post about the attack, the company added that the loss of information appeared to stem from a privileged user’s compromised account. The user appeared to have re-used their Bugzilla account password on another website, which suffered a data breach. The attacker then allegedly gained access to the sensitive Bugzilla account and was able to “download security-sensitive information about flaws in Firefox and other Mozilla products.”

Mozilla added that the attacker accessed 185 non-public Firefox bugs, of which 53 involved “severe vulnerabilities.” Ten of the vulnerabilities were unpatched at the time, while the remainder had been fixed in the most recent version of Firefox at the time.

Publishing the FAQ as a PDF is a bit crummy – makes it harder to process. Reuse of passwords is a big problem but you wouldn’t expect someone with high-level access to Bugzilla to do it.
link to this extract

Mark Gurman, so we should trust it, right?

One of the cornerstone features of the iPhone 6s and iPhone 6s Plus, to be announced next Wednesday, is a screen based on the Force Touch technology from the latest MacBook trackpads and the Apple Watch. However, as we noted in previous articles such as our event expectations roundup from yesterday, the Force Touch feature in the new iPhones will actually be a next-generation version of the technology. According to sources familiar with the new iPhones, the new pressure-sensitive screen will likely be called the “3D Touch Display”…

Sounds like a bit of a clunky name?
link to this extract

When you walk into the Museum of Soviet Arcade Games in St. Petersburg, the first thing you’ll see is a series of gray, hard-edged soda machines from the early 1980s. If you choose the one in the middle, it will dispense a tarragon-flavored and slightly fermented soda whose recipe relies on a syrup that has not been mass produced since the fall of the Soviet Union. It tastes not unlike a mix of molasses and breath mints.

All around us are beeps, pings, and shot blasts coming from rickety old machines that seem like they’ve time-traveled from the golden era of American arcade games. And yet, everything’s in Russian, we’re using kopecks as currency, and there is no Donkey Kong here.

This is not your typical museum. For one thing, everything is not only touchable, but playable. Designed to look like a 1980s USSR video game arcade, the museum is filled with restored games carefully modeled after those in Japan and the West and manufactured to the approval of the Cold War-era Soviet leader, Nikita Khrushchev…

…“The fact that some of these products are in danger of disappearing is why they are beloved,” says Dr. Steven Norris, a Professor of History at Miami University in Ohio who specializes in Russian and post-Soviet studies. “Nostalgia for the video games of the 1970s and 1980s is part of a larger nostalgia for Soviet consumer products of late socialism.”

Fabulous journalism bringing us a view of the world we’d not otherwise get. And of course in Soviet Russia, arcade games play you.
link to this extract

When you click a link in Google search results, Google uses JavaScript to replace the actual link with an indirect one, which they use for click tracking. Google then redirects the browser to the actual destination after logging the click. DirectLinks disables the JavaScript that replaces real links with indirect ones, so that when you click a search result link, Safari goes straight to the destination.

The extension does something similar for links in Facebook posts: it removes JavaScript that Facebook uses to track clicks on these links.

Probably won’t be long before this is incorporated into content blockers for iOS 9. It’s super-annoying to try to copy a link off Google and get a bunch of obfuscated Javascript.
link to this extract

To catch up with the growing issue, the IAB [Interactive Advertising Bureau] hosted a member leadership summit on July 9 at the IAB Ad Lab in New York City that convened the IAB and IAB Tech Lab boards as well as a number of sales and technology executives to discuss ad blocking. “It was more of an educational [meeting] to get the options on the table,” [Scott] Cunningham [senior VP at IAB and general manager of its Technology Lab] said.

Some of the options put on the table were a lot stronger than some of the more Pollyanna-ish calls for better ads or publisher appeals asking people to turn off their ad blockers as ways to fight ad blockers.

“I advocated for the top 100 websites to, beginning on the same day, not let anybody with ad blockers turned on [to view their content],” said Mr. Moore. He said that the other IAB members in attendance considered it “a good idea but the possibility of pulling it off slim.”

That might not even be the most drastic option the IAB and its members are considering. The possibility of suing the ad-blocking companies is being explored.

The ad blockers “are interfering with websites’ ability to display all the pixels that are part of that website, arguably there’s some sort of law that prohibits that,” Mr. Moore said. “I’m not by any means a lawyer, but there is work being done to explore whether in fact that may be the case.”

“interfering with websites’ ability to display all the pixels that are part of that website”. I’m not going to laug…HAHAHAHAHA.

Denial, anger, bargaining, depression, acceptance. I think we’re on No.2. Progress still to be made.

Still, there is good news: the IAB officially adopted HTML5 as the new standard for display ads, replacing Flash.
link to this extract

How to write a great error message » Medium

Imagine being in an office. In your cubicle. You’ve worked long hours this week for an upcoming product introduction. You’re tired and cranky, and you just want the weekend to finally arrive.

But first you have to try if the homepage for the new product works fine on Windows 10. No problem, you think, your trusty Mac laptop has software installed that allows you to run Windows.

You fire up the software, and when Windows politely asks you to update with several intrusive notifications, you say, sure, go ahead.

And then you see this. That would be almost amusing, if it wasn’t for the deadline for the product.

Terrific article. (Via Dave Verwer’s iOS Dev Weekly. You should try it.)
link to this extract

David Ruddock, who has been doing some terrific work at Android Police, has a great review with this conclusion:

So, should you buy these phones? I mean, that really comes down to the criteria they don’t meet for you, not what they do. Because these devices really are the technical pinnacle of the smartphones currently out there, a given person’s lack of interest in them is going to almost certainly come down to price, philosophy, or a particular missing feature or other perceived weakness (such as the absent microSD slot or a lack of stock Android). Make no mistake: these are excellent phones. But is excellence worth this much money, especially when the pitfalls (subpar battery life, slow updates, and performance hiccups) mirror or sometimes even exceed those of devices costing potentially much less? That’s for you, the consumer, to decide. If you’re asking me, the flash isn’t worth the cash – Samsung’s premium phones today are much more about brand image and fashion than they are user empowerment or choice.

The comments also show that Samsung users are… animated about the absence of SD cards/removable batteries, battery life, price, the “why upgrade?” question and app performance.
link to this extract

Neil Shah analyses HTC’s position, where its August revenues were the lowest for 10 years – and there’s no sign of improvement:

Being a pure hardware only vendor won’t take HTC far enough. HTC should learn from another Taiwanese company Asus how it is making a comeback and scaling up with cutting edge specs at highly affordable price-points.

If this doesn’t work, a potential merger or getting acquired is the only way the company can return value to its shareholders and think about growing with other company.

However, for that HTC at least for short- to mid-term will need to raise its game, make itself attractive to others.

HTC should focus on building an IP portfolio over the next couple of years and eventually maximize its valuation. Merging with other Taiwanese companies such as Acer or Asus to justify scale could also be a possible strategy.

HTC’s Cher Wang seems unwilling to countenance a takeover, but she might have to consider it seriously pretty soon.
link to this extract

BlackBerry is spending $425m of its not-growing cash pile to buy Good, which has been a bitter rival for more than a decade. Inside BlackBerry lobbed some soft questions at BlackBerry COO Marty Beard and Good CEO Christy Wyatt, but not all the answers were quite that gentle:

IBB: Speaking of customers, how does this impact each of your existing customers and what new areas will come of it?

MB: Our acquisition of Good will mean the end of compromise for customers. We will be able to provide even stronger cross-platform capabilities – ensuring customers won’t have to make any sacrifices in operating systems, deployment models, or any level of privacy and security in their mobile environments. I truly believe that combined, BlackBerry and Good will raise the bar in the enterprise mobility market, enabling our customers to be more productive and protecting their sensitive data across all of their mobile end points.

CW: Historically, when a customer chooses their enterprise mobility platform, they have been asked to make tough choices: do they want deep management, deep security, a great user experience or enterprise scalability? The truth is that customers should not have to choose. They will need different tools to solve different mobility challenges. With this combination, customers can have the best in security, management, ecosystem and experiences all on a common platform.

I love how they’re both needling about each others’ products, but now saying that ach, it’s all good. This is a smart acquisition by BlackBerry; now it needs to make it work.
link to this extract