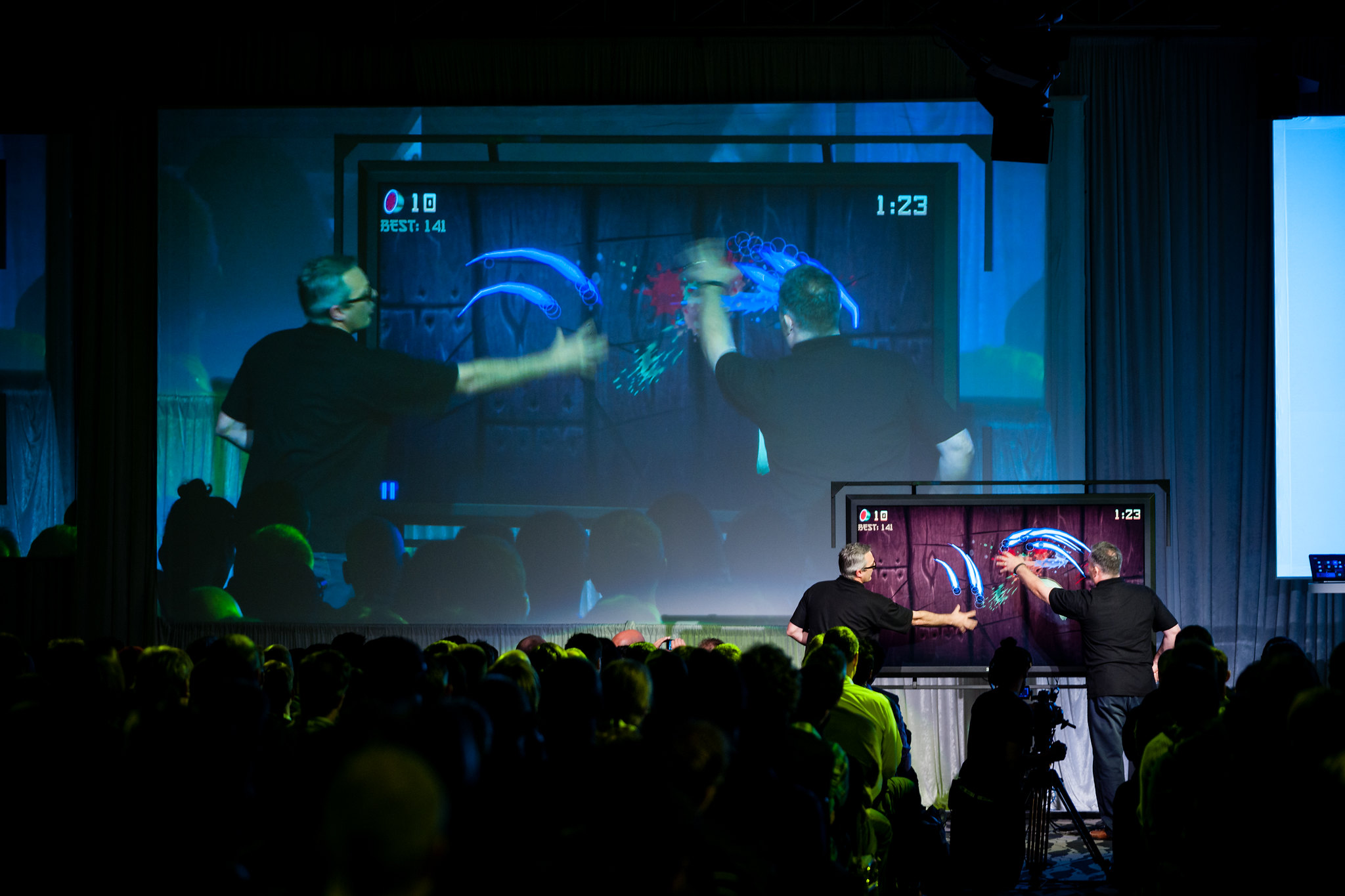 Big touchscreens: what are they good for? Photo by Microsoft Ignite NZ on Flickr.

I for one welcome our new robotic ove.. AH, NOT SO SMART NOW, ARE YOU?

I’m changing my mind about Google’s data-volume-based advantage. I believe Apple sees a volume of (anonymized) user data that’s on the same order of magnitude as Google (on mobile). Google Now may provide Google with more question/intent data, but Apple sees the bigger picture of what consumers (in aggregate) do/need throughout the day. I base my belief on iOS’s huge installed base, high app downloads and usage, and Apple’s full-stack access to iOS devices.

Machine learning is to 21st century devices as the graphical user interface was to 20th century computers. I don’t mean that as a user interface metaphor, but as a way to express how critical it will be to a high-performance product.

At a machine learning conference the other day, someone said to me: “a really smart AI wouldn’t need a ton of data. It would figure out what lions look like from just one picture of a lion, not hundreds. Maybe Google’s aren’t that good if they need so much data.” Well, perhaps..

Tech giant Samsung Electronics Co Ltd plans to offer a mobile payments function in a smartwatch to be launched in the second half of the year, South Korea’s Electronic Times newspaper reported on Monday citing unnamed sources.

Samsung would use near-field communication (NFC) technology to support mobile payments on the smartwatch, the report said. This is the same technology Apple Inc uses for the Apple Pay function supported by its smartwatches.

On June 9, Facebook plans to publish a research paper detailing a system that can chew through several million pieces of data, remember the key points, and answer complicated questions about them. A system like this might let a person one day ask Facebook to find photos of themselves wearing pink at a friend’s birthday party, or ask broader, fuzzier questions, like whether they seemed happier than usual last year, or appeared to spend more time with friends.

While AI has long been an area of interest for Hollywood and novelists, companies hadn’t paid much attention to it until about five years ago. That’s when research institutions and academics, aided by new techniques for crunching reams of data, started breaking records in speech recognition and image analysis at an unexpected rate. Venture capitalists took notice and invested $309.2 million in AI startups last year, a twentyfold increase from 2010, according to research firm CB Insights. Some of these startups are helping to break new ground. One in Silicon Valley, called MetaMind, has developed improvements to computers’ understanding of everyday speech. Clarifai, an AI startup in New York, is doing complex video analysis and selling the service to businesses.

Facebook’s office for this is in France. British companies are big in this too. Cannot emphasis enough how important this field is. (Can’t find the research paper, though.)

As is the case with Apple Pay in the US, Apple has convinced retailers and banks to remove the limit because they can prove the customer is present thanks to the use of the Touch ID fingerprint scanner on the iPhone.

MasterCard have confirmed similar options for Apple Pay retailers in the UK too:

“Currently the vast majority of payment terminals here in the UK are set to accept contactless transactions up to the £20 spending limit, but that will rise to £30 in September (for cards as well),” a spokesman for MasterCard told Pocket-lint when we asked about clarification on the limit thresholds.

“As more digital services like Apple Pay come to market, we’re [MasterCard] supporting retailers and banks as they update the terminals so that they can accept authenticated transactions above that limit from digital devices.”

Some fascinating interviews by Adam Lashinsky (with Uber’s cooperation, of course), which are all worth reading; including this by Conrad Whelan, who was its first engineer:

When I joined the company, you couldn’t actually sign up for the product. It was just a way to order the car. So I built the sign-up flows that would take a credit card and make user accounts. So as soon as we did that, we could officially launch, which was June 1st, 2010, two months after I started.

I think the next thing I did, which I really enjoyed, was optimize the dispatch algorithms to take into account drivers that might miss a dispatch. That lasted like three years, or something like that, which is pretty cool.

Sounds throwaway, but gives a hint of the huge complexity involved.

Amy Schade tried out a 24in tablet with her children (because children don’t know what they’re not supposed to not do):

While the large screen was completely enthralling to my 2 year olds, the size of the touchscreen was a drawback for my daughter. She leaned on the screen with one hand in order to reach another part of the screen. As a result, the puzzle pieces that she was trying to move jumped from one hand to the other, if they moved at all.

Using the large screen was particularly hard for her, based on her size relative to the device —most of us aren’t using devices that are nearly as big as we are. However, her attempts to use it also illustrate a problem far more likely to be encountered with large touchscreens: that of unintended two-handed touches and other accidental touches.

We see this play out in our testing of mobile devices. We witness more accidental touches or brushes of the screen as people maneuver standard sized tablets than we do when watching people use their phones.

First-tier PC vendors reportedly are seeing serious inventory issues in Europe and may try to digest stocks by offering price cuts. At the same time, some channel retailers are reacting to the news by boycotting the vendors to avoid having inventory dumped on them, according to sources from the upstream supply chain.

The PC supply chain was originally optimistic about demand for PCs in the second quarter, but component suppliers have seen their orders from brand vendors weakening during the quarter as most vendors have high inventory levels on hand, which they are struggling to clear as most consumers have halted their notebook purchasing to wait for the release of Windows 10, which is scheduled for the end of July…

Facing the music » All this

Dr Drang on the longest half-hour ever, at the end of the Apple keynote in which Eddy Cue introduced Apple Music:

nothing justifies the dancing. I’m sure Eddy thought it was funny and self-deprecating, but it was just annoying and a waste of our time. I often think Craig Federighi overdoes the jokes, but he knows when to pull it back and doesn’t let his presentation get derailed. Eddy doesn’t have that sense.

As to whether Apple Music is really good, we’ll have to wait and see, but the signs aren’t pointing in that direction. The elevator pitch is that “Apple Music is three things” – an attempt to tie it to the 2007 introduction to the iPhone. (And someone should have explained that to Iovine before sending him onstage. He clearly didn’t understand the audience’s reaction to the “three things” line.) But while the advantages of a multifunction device are obvious, the advantages of a multifunction app aren’t. The App Store’s success is largely based on tightly focused apps, not sprawling suites.