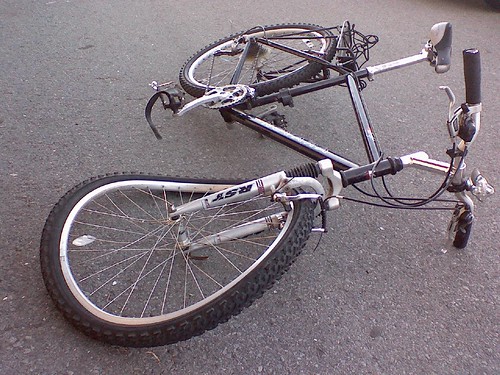 Surely not caused by a Google car. Photo by Oakland Pirate on Flickr.

A selection of 9 links for you. Free like nitrogen. I’m charlesarthur on Twitter. Observations and links welcome.

One of the blog’s readers gave their experience:

It’s safe to cut off a Google car. I ride a motorcycle to work and in California motorcycles are allowed to split lanes (i.e., drive in the gap between lanes of cars at a stoplight, slow traffic, etc.). Obviously I do this at every opportunity because it cuts my commute time in 1/3. Once, I got a little caught out as the traffic transitioned from slow moving back to normal speed. I was in a lane between a Google car and some random truck and, partially out of experiment and partially out of impatience, I gunned it and cut off the Google car sort of harder than maybe I needed too… The car handled it perfectly (maybe too perfectly). It slowed down and let me in. However, it left a fairly significant gap between me and it. If I had been behind it, I probably would have found this gap excessive and the lengthy slowdown annoying. Honestly, I don’t think it will take long for other drivers to realize that self-driving cars are “easy targets” in traffic.

Why do we assume everyone can drive competently? » Remains of the Day

Eugene Wei just avoided a cycling crash when a car turned into his cycle lane without warning:

For the next two blocks, I played my near collision on loop in my head like a Vine, both angry at the driver’s reckless maneuver and relieved as I tallied up the likely severity of the injuries I had just managed to escape by less than a foot of clearance. This is not an unusual occurrence, unfortunately. When I bike, I just assume that drivers will suddenly make rights in front of me without turning on their turn signal or looking back to see if I’m coming in the bike lane to their right. It happens all the time. It’s not just a question of skill but of mental obliviousness. American drivers have been so used to having the road to themselves for so long that they feel no need to consider anyone else might be laying claim to any piece of it. Though the roads in Europe are often narrower, I feel a hundred times safer there when biking there than I do in the U.S. All that’s to say I agree wholeheartedly with the writer quoted above that self-driving cars are much less threatening than cars driven by humans. As an avid cyclist, especially, I could think of nothing that would ease my mind when biking through the city than replacing every car on the road with self-driving cars.

iOS 9 Transit Maps to launch in a handful of cities in North America, Europe & China » 9to5Mac

Mark Gurman, for it is he:

While Apple plans to debut its own mass transit directions service for Maps in iOS 9 as soon as June, the rollout will not be as ambitious as some users may have hoped. In its first iteration, Apple’s Transit service will only support approximately a half-dozen cities across the United States, Canada, and Europe, in addition to China, according to sources… In the United States, the planned launch cities are San Francisco and New York, two major metropolitan areas that are known for public transportation, while Toronto will be likely Canada’s sole representative for the iOS 9 Maps Transit feature at launch. In Europe, Apple is said to be gearing up to first launch the feature in London, Paris, and Berlin.

Google has been miles ahead in this for years (which made iOS 6 retrograde). Three years on, there are already lots of apps – especially Citymapper – which offer services like this. But it’s the integration that Apple has really lacked.

Google’s answer to the big problem with wearables » WSJ

Wearable gadgets like smartwatches have seen a lot of hype but little commercial success. An obvious obstacle is that teensy touch screens can make such devices difficult to control. Google thinks it has an answer: a minuscule radar system that senses hand gestures. The company’s Advanced Technology and Projects research group shrank a radar system into a package roughly the size of a micro SD card, small enough to fit in a smartwatch. It beams a signal wide enough to capture hand motions and gestures and turn them into control signals, according to Ivan Poupyrev, who led the initiative called Project Silo. The tiny radar could let people control tiny-screen devices without having to touch them, he said during a session at the Google I/O 2015 developer conference. For instance, it transforms a twisting motion between thumb and forefinger into commands to scroll up and down a smartwatch’s screen. Poupyrev demonstrated by changing the hours and minutes on a small screen by rubbing his thumb and finger near to the radar gesture sensor. He also played a simple soccer game, his finger motions in midair near the sensor shooting an onscreen ball into a goal. ATAP plans to release the system to developers later in 2015, Poupyrev said.

This is one of those things that looks cool in demos, but I suspect could be prone to everything that real life is – mess-ups. Remember Leap Motion, another gesture control system? Went nowhere because waving your hand in the air isn’t a natural way to control things – because it’s prone to misinterpretation. Google might get this right, but it needs a ton of figuring out.

Apple’s App Store accounts for about 45% of the revenue that developers make from apps, compared with 29% for Google’s Play, according to Digi-Capital. But counting in the income from handsets in China — where Google’s apps are blocked, meaning it makes no money — pushes the overall Android share to 52%, Digi-Capital calculates. Last week, matching — and trying to surpass — Apple was a strong subtext of Google’s pitch to developers. New features included Android Pay, a rival to Apple Pay and a fresh attempt to break into mobile payments after the disappointment of Google Wallet. A new Google Photos app — with the promise of software that can automatically organise libraries of pictures — also echoed capabilities that are already offered by Apple. But in other areas, Google seemed unprepared. While smartwatches based on last year’s Android Wear technology have been put in the shade by the launch of Apple Watch, Google had little new to show off in response. This was a sign that it is surrendering early leadership in wearables to Apple, according to Carolina Milanesi, an analyst at Kantar Worldpanel.

We designed Windows 10 to create a new generation of Windows for the 1.5 billion people using Windows today in 190 countries around the world. With Windows 10, we start delivering on our vision of more personal computing, defined by trust in how we protect and respect your personal information, mobility of the experience across your devices, and natural interactions with your Windows devices, including speech, touch, ink, and holograms. We designed Windows 10 to run our broadest device family ever, including Windows PCs, Windows tablets, Windows phones, Windows for the Internet of Things, Microsoft Surface Hub, Xbox One and Microsoft HoloLens—all working together to empower you to do great things. Familiar, yet better than ever, Windows 10 brings back the Start menu you know and love.

“Speech, touch, ink and holograms” is quite enticing. (That’s Hololens, of course.)

The ZenWatch 2 runs the latest version of Android Wear, which was recently introduced with the LG Watch Urbane, however Asus’ watch is still a long way from actually being released. Asus tells us that it will reveal the full specs, pricing, and availability information during IFA in Berlin this September — leaving this as more of a promise than an actual product. The goal is to keep prices consistent between the two watch sizes, leaving the choice of strap to determine the particular cost. Update: The original article speculated that Asus’ metal crown will function like the digital crown in the Apple Watch, however we’ve now confirmed with Asus that it’s simply an external button and not a physical scroll wheel.

1) Doesn’t this Osborne [kill by preannouncement] the existing Zenwatch, even though there’s no price etc etc for the 2? 2) Which company will be the first, do we think, to mimic Apple’s digital crown and risk the sure-to-ensue lawsuit?

A Samsung spokesman in Seoul refused to release any official information on sales; but the company is expected to unveil figures at its upcoming investor relations forum on [Wednesday] June 3. Such remarks come a few days after Samsung Electronics Corporate Affairs President Park Sang-jin told reporters that the firm has been seeing a steady increase of sales on international markets. “You have to wait and see; however, the S6 and S6 Edge sales will be far higher than those of the S5” he said. The two models were unveiled during the Mobile World Congress 2015 event at the beginning of March. Both models were made available for purchase in April. Citing a report by CounterPoint Research, a research firm, eBEST Investment analyst Kim Hyun-yong said Samsung sold 6.1m S6s and S6 Edges in April. He added 305,000 S6s were being sold daily since the devices’ availability ― better than the S5 and S4’s 124,000 and 241,000 per day, respectively.

I’m finding it hard to believe that the S6 (and Edge?) is selling triple the number of the S5, and 50% more than the S4, at a time when Samsung is down in China and seen sales declines for months, and the S6 is on sale in fewer countries than the S5 was. Though with Samsung it’s hard to know what “sales” means – usually, it’s “sell-in”, as in sales to carriers.

Bitcoin wallets are typically created by randomly generating a public address and a related private key. As a result, it is important for address and key to be truly random, or else it may be possible to guess the private key by looking at the public address. [Bitcoin wallet app] Blockchain used two sources of random numbers, in what ought to have been a belt-and-braces approach: it pulled a random number from the Android operating system’s built-in random number generator, and then connected to online service Random.org to get a second random number, which it combined with the first. Unfortunately, on some Android phones (reportedly including devices from the Sony Xperia range), the built-in random number generator failed to report back to the blockchain app. Normally, this should have been survivable, because the app used a second source of random numbers. But on 4 January, Random.org strengthened the security of its website, requiring all visits to be made over an encrypted connection. The blockchain app, however, continued to access the site through an unencrypted connection. So rather than getting a random number, as expected, it got an error code telling it that the site had moved. It then used that error code as the random number, every single time.

Not quite bitcoin itself screwed (it’s far too robust) but those using that app could find themselves all sharing a wallet.