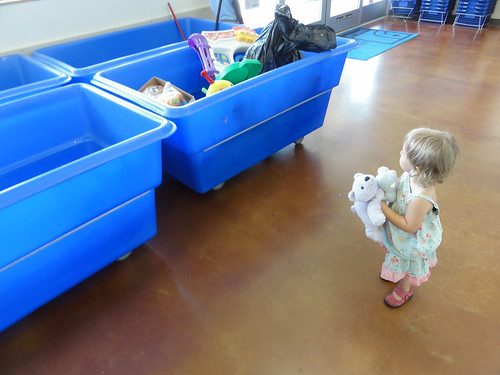 Got anything you want to dump? “Goodwill” by Editor B on Flickr.

Did you read my piece about the negative per-handset margins of Microsoft’s Lumia phones? Oh, you should, it’s great.

Bearing that in mind…

Spotted in Microsoft’s 10-Q (that’s the full quarterly writeup of everything going on in the business is this rather important couple of paragraphs. (“Goodwill” is accounting talk for “stuff that you can’t drop on your foot but honestly, it’s worth something, that’s why we paid so much for the company”). I’ve added some emphasis:

We determined that none of our reporting units were at risk of impairment as of our most recent annual goodwill impairment testing date. The valuation of acquired assets and liabilities, including goodwill, resulting from the acquisition of NDS, is reflective of the enterprise value based on the long-term financial forecast for the Phone Hardware business. In this highly competitive and volatile market, it is possible that we may not realize our forecast.

In the third quarter of fiscal year 2015, Phone Hardware did not meet its sales volume and revenue goals, and the mix of units sold had lower margins than planned.

We are currently beginning our annual budgeting and planning process. We use the targets, resource allocations, and strategic decisions made in this process as the inputs for the associated cash flows and valuations in our annual impairment test.

Given its recent performance, the Phone Hardware reporting unit is at an elevated risk of impairment. Declines in expected future cash flows, reduction in future unit volume growth rates, or an increase in the risk-adjusted discount rate used to estimate the fair value of the Phone Hardware reporting unit may result in a determination that an impairment adjustment is required, resulting in a potentially material charge to earnings.

And how much goodwill is there? In Note 8, we find that there’s an allocation of $5,456m to “goodwill” for the acquisition of Nokia Devices and Services (NDS). Five and a half billion dollars of “no, honestly, it’s worth this much in the long term, just watch”.

Or as the 10-Q puts it, “The goodwill was primarily attributed to increased synergies that are expected to be achieved from the integration of NDS.”

Sony in September wrote down the expected value of its phone business by £1bn. And it has a mobile business that competes quite well at the high end.

Microsoft’s writedown could be much, much bigger. Perhaps not as big as the $6.2bn writedown of aQuantive in 2012 (it wrote off the whole value of the acquisition), but potentially quite a lot.