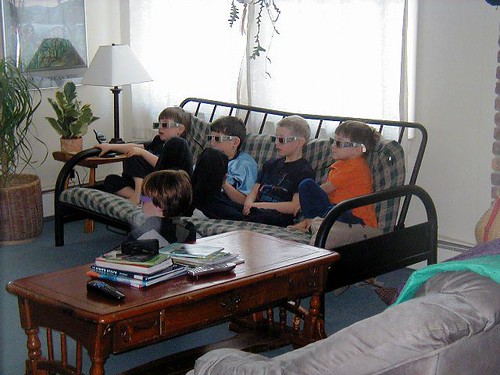 3D TV. Are we sure this was a good idea? Photo by Jen’s Art & Soul on Flickr.

The EU’s search case is closer to completion. After five years of investigation and a formal statement of objections, the commission could issue a remedy by the end of the year. But according to Paul Lugard, a Brussels-based antitrust lawyer with the multi-national firm Baker Botts, who has no connection to the many companies involves in this legal melee, the Android case may be the greater threat to Google. “The competitive harm is a little bit easier to establish than in the search case,” he says. “The Android case is more conventional.”

American regulators haven’t pursued action against Google in this area, but as Lugard says, the burden of proof in such cases isn’t as high in Europe as in the U.S. “The process in Europe is more formalistic and less economics-effects driven than in the U.S,” he says. In other words, the EU doesn’t have to work as hard to show that consumers and competitors have been harmed…

…If the commission does crack down on Android, we may see a large fine against the company, Logan says. Or we may see a dissolution of those Google contracts with handset makers. That may be the biggest threat to Google. Googles doesn’t make money from Android. It makes money from the ad-driven services that run atop the OS. And with Oracle, Microsoft, and so many others pushing so hard, those services may lose at least part of their foothold.

I still find the Android complaint far less persuasive than the search one. Lots of Americans see it the other way round.

Displaces the iPhone 6 and 6 Plus at the top. There’s a fairly constant game of leapfrog going on. Also, DXOMark is going to hit the 100 some time in the next couple of years, which might be a problem for its marking scheme.

while the overall design of the G4 is very similar to the G3, LG is offering the new phone with leather backs in a handful of colors that bring the all-plastic phone up a few notches in terms of look and feel. The company says it spends an inordinate amount of time (three months) making each leather back, and the materials and processes used to do so are the same as luxury handbags. The leather options are certainly an improvement over the gross, glossy plastic used on other LG phones, but it feels more like the phone is in a leather case than actually being a handcrafted artifact…

…Other highlight specs include a Qualcomm Snapdragon 808 processor, 3GB of RAM, 32GB of internal storage, a 3,000mAh removable battery (but no Qualcomm QuickCharge support or built-in wireless charging), and a Micro SD card slot. LG also says that the GPS navigation and location services on the G4 are twice as accurate as other phones.

Very much want to see how the SD card/removable battery gambit plays out. This will test whether all those people saying it’s a dealbreaker not having them on the Samsung are just posturing. Or, maybe, whether there just aren’t that many of those people.

(Also: the leather back indeed looks like a case.)

Google’s YouTube will directly invest in new shows to be launched in partnerships with its four top content creators, it said in a blog on Tuesday.

The world’s No. 1 online video website also said it entered into an agreement with DreamWorks Animation SKG Inc unit AwesomenessTV to release feature films over the next two years.

The partnerships would help YouTube, which completed 10 years last week, secure higher quality advertising as it transitions from a repository of grainy home videos to a site with more polished content.

YouTube has been trying to lure more premium video advertising to boost margins as overall prices for Google’s ads have been declining.

The website, which attracts more than 1 billion unique visitors a month, far surpassing those of Netflix Inc and Amazon Inc, did not disclose how much it was investing or how the partnerships would be structured.

Making films is not a trivial process; I think Google is going to discover how low returns can be when you just put something online.

3D TV is pretty much over: Sky 3D to close in favour of on-demand only » Digital Spy

The move is no surprise, as viewers never warmed to 3D from their living rooms, despite a heavy push to make it the next big thing.

On the flip side, on-demand television is booming according to Sky’s brand director Luke Bradley-Jones, which is why it has decided to shift its 3D content.

“Since its launch in 2010, Sky 3D has led the industry, becoming the home of incredible 3D content – from Sir David Attenborough’s award-winning documentaries like Flying Monsters, to the biggest Hollywood blockbusters like Avatar,” he explained.

“From June Sky 3D is going fully on-demand. From the latest 3D movie premieres like Guardians of the Galaxy, X-Men: Days of Future Past and Dawn of the Planet of the Apes, to the very best in natural history with documentaries like Natural History Museum Alive, it will all be ready and waiting for our customers to view whenever it suits them.”

Google turns on the charm in Europe » FT.com

Google privately woke up to the fact that it needed to change the way it was operating in Europe last summer, according to Carlo D’Asaro Biondo, the French-Italian executive leading the group’s new charm offensive.
“We realised in the last years we had a problem,” he says.
In Mr D’Asaro Biondo’s analysis, Google should have offered a helping hand to all kinds of European industries as the digital world put increasing pressure on their business models. That did not happen.
“In Europe we were not organised to value [partnerships],” he says. “We were more organised to sell advertising.”
That neglect has exacted a high price. A series of running battles with the media and entertainment industries over copyright issues has expanded into wider competition complaints, resulting in this month’s action in Brussels.

In case you wondered why Google would be lobbing €150m to various news organisations in Europe.

When your credit card gets stolen because a merchant you did business with got hacked, it’s often quite easy for investigators to figure out which company was victimized. The process of divining the provenance of stolen healthcare records, however, is far trickier because these records typically are processed or handled by a gauntlet of third party firms, most of which have no direct relationship with the patient or customer ultimately harmed by the breach.

I was reminded of this last month, after receiving a tip from a source at a cyber intelligence firm based in California who asked to remain anonymous. My source had discovered a seller on the darknet marketplace AlphaBay who was posting stolen healthcare data into a subsection of the market called “Random DB ripoffs,” (“DB,” of course, is short for “database”)…

…Health records are huge targets for fraudsters because they typically contain all of the information thieves would need to conduct mischief in the victim’s name — from fraudulently opening new lines of credit to filing phony tax refund requests with the Internal Revenue Service. Last year, a great many physicians in multiple states came forward to say they’d been apparently targeted by tax refund fraudsters, but could not figure out the source of the leaked data. Chances are, the scammers stole it from hacked medical providers like PST Services and others.

Tencent Holdings Ltd. released an operating system for smartphones and smartwatches Tuesday as it tries to win more of the 557 million Chinese accessing the Internet through mobile devices.
The software, called TOS+, provides voice recognition and includes payment systems, Chief Operating Officer Mark Ren said during the Global Mobile Internet Conference in Beijing.
Tencent follows domestic rival Alibaba Group Holding Ltd. in creating its own operating system for a country where more than nine out of 10 smartphones use Google Inc.’s Android. TOS+ seeks to tap Tencent’s stronghold in online gaming by including virtual reality and supporting play on televisions.

Tencent owns WeChat and QQ – which together have more than a billion users. Are people going to replace their mobile phones for this? Are handset makers going to use it? Feels ambitious but hard to make work at the scale of mobile.