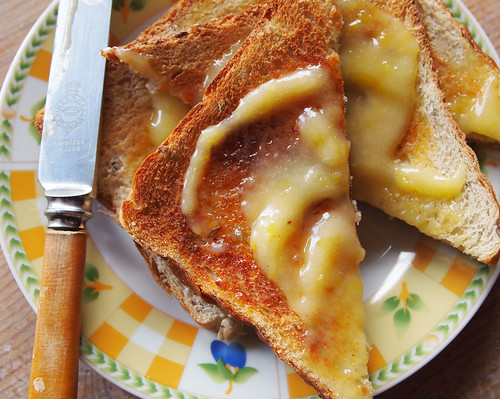 Samsung, in a few years? Photo by French Tart on Flickr.

A selection of 13 links for you. (Too many? Too much news.) I’m charlesarthur on Twitter. Observations and links welcome.

​In late October, Google announ​ced that Lollipop, its newest version of Android, would have “encryption by default.” Monday, it was a curious reporter, not Google, reporting that would no longer be the case.

Instead of requiring every file on an Android system to be encrypted by default, the choice will be left up to manufacturers such as Samsung, LG, and Motorola as to whether to turn that feature on out of the box, Ars Tec​hnica discovered.

“Google has made statements that are no longer true, and it’s Google’s obligation to publicly correct that statement,” Amie Stepanovich, US policy manager for the digital rights group Access, told me.

Google won’t say why it’s backtracking, but it’s pretty evident the reason is device performance – encryption slows them down. User security takes second place to performance – the story that has killed BlackBerry down the years.

Cybercriminals have recently created multiple phishing sites in order to trick iOS device owners into providing login credentials for their iCloud accounts. The attackers appear to be focusing on users whose iPads and iPhones have been lost or stolen. It’s possible that the attackers are running this phishing operation as part of a service for iOS device thieves on underground forums.

In one particular case, a victim of iPad theft received an unsolicited message, informing him that his tablet had been found. The message then instructed him to click on a link to discover the location of his iPad.

Surprise! It’s a phishing site to get the iCloud credentials and unlock the stolen phone for resale.

Kashmir Hill on Raul Rojas, a computer science professor who made his whole house into a smart home (apart from the locks – he worried about the locks):

About two years ago, Rojas’s house froze up, and stopped responding to his commands. “Nothing worked. I couldn’t turn the lights on or off. It got stuck,” he says. It was like when the beach ball of death begins spinning on your computer—except it was his entire home.

…when he investigated, it turned out that the culprit was a single, connected light bulb.

“I connected my laptop to the network and looked at the traffic and saw that one unit was sending packets continuously,” said Rojas. He realized that his light fixture had burned out, and was trying to tell the hub that it needed attention. To do so, it was sending continuous requests that had overloaded the network and caused it to freeze. “It was a classic denial of service attack,” says Rojas. The light was performing a DDoS attack on the smart home to say, ‘Change me.’”

Take a look at his home hub. That’s not some little router.

BlackBerry may take another run at the tablet market.

That’s if CEO John Chen thinks the opportunity is right. “It’s not in the works, but it’s on my mind,” Chen said in an interview at the Mobile World Congress conference here.

A BlackBerry tablet could satisfy the needs of a small but fiercely loyal group of productivity-focused customers who have stuck with the struggling smartphone maker and its operating system, potentially giving it a new revenue stream. But there aren’t enough BlackBerry faithful to sustain such a business, especially given the tablet category saw its first year-over-year decline in shipments in the fourth quarter.

“History repeats itself, the first time as tragedy, the second as farce,” to quote Marx (not Groucho).

Does anybody understand these baffling MWC slogans? » Pocket-lint

One of the things we always notice when trudging trade show floors is that companies feel the need to explain what they do, or what they are showing in a three or four word slogan. However, most of them are claptrap of the highest order.

Wonderful (and classically British) insistence on taking words at their face value, and asking the important questions that other sites (and certainly not the boring American ones) will, such as: “what actually does ‘unleash the future’ mean, Mozilla?”

Google is reportedly preparing to release an Android Wear app on the App Store for iPhone and iPad, according to French technology website 01net [Google Translate] (via iPhon.fr).

The report claims Android Wear with extended iOS support could be announced at Google’s I/O developer conference in late May, although Google may push the agenda depending on sales of the Apple Watch.

Google may be interested in capitalizing on iPhone and iPad users that are not planning to purchase an Apple Watch when the wrist-worn device is released in April, the report adds.

Essentially unsourced, but it would make sense: Google wants its services used as widely as possible, and not having Android Wear on iOS leaves tens of millions of potential customers unserved.

However, are there many iPhone users who would opt for Android Wear over an Apple Watch, except over the question of price? At the bottom end, the price delta is pretty low – and if that really matters, you’d get a Pebble, since it has been iOS-compatible from day one. So I believe this report, but don’t think Android Wear will benefit from it as much as Google (and AW makers) might want.

Lisa Eadicicco, with a smart interview with McMaster, who says:

On the global platform, we see Xiaomi becoming the No. 3 OEM. Micromax is now No. 10. These guys are basically creating really cheap handsets that have really awesome performance. This is made possible because of Qualcomm’s turnkey solution as well as Mediatek’s.

One of the things Cyanogen does really well is optimizations at the low level, at the kernel level. Which means we can get performance out of these chipsets coming out of turnkey that make the device for all intents and purposes feel like a $600 iPhone.

The tier one OEMs like Samsung are going to be the next generation Nokias in the next five years. They’re going to be slaughtered. We think long term Apple itself will have problems because they’re just not good at competing at the low end.

Q: So you think Samsung will be toast in five years?

It could get pretty bad pretty damn quick. This is often the case.

Is it possible to make road-safety fun? Yes, it turns out. Kevin’s Richardson’s idea is both smart and simple. As well as ticketing you when you run through a speed-radar too fast, Kevin’s “Speed Camera Lottery” also notices you when you come in at or under the speed-limit. It then automatically enters you in a lottery. And here’s the really smart part: the prizes come from the fines paid by speeders.

This would probably never work in the U.S, where speeding fines and red-light cameras exist as revenue streams for the police rather than as deterrents to bad driving, but the Swedish National Society for Road Safety, which worked with Kevin, has found it to be a success.

Neat idea (there’s the video) but of course it relies on tying your speed to your licence plate, ad so your address, and so you. Sweden is open enough that that is accessible. But other countries?

Even so, the idea of changing behaviour through “fun” is a subtle – yet powerful – one.

3D-printing with living organisms “could transform the food industry” » Dezeen

No content. Just consider
• use of “could” in the headline. As Paul Haine points out, you can extend Betteridge’s Law (“any headline posed as a question can be fully answered and the story implications understood with ‘No'”) to headlines which use “could”
• “3D printing with living organisms” is also known as “growing, preparing and cooking stuff”. No 3D printer required.

Zuckerberg: carriers will connect the world, not sci-fi – CNET

“People like talking about that stuff because it’s sexy,” Zuckerberg said of such departures from networks delivered by plain old cell phone towers and fiber-optic lines. “That’s at the fringe of the real work that’s going on. Ninety percent of the people in the world already live within range of the network.”

Well that’s putting a pin in the balloon so laboriously pumped up by various blogs of how Loon is going to totally, utterly, y’know, transform how everyone stays connected.

this morning at Mobile World Congress, Microsoft announced a new version of Office 365. I gotta be honest. It looked like it was trying to take full-blown Office and squeeze it into a 5 or 6 inch screen. Sure, they tuned it a bit to make it mobile friendly, but it was still Office in all its glory in a smaller footprint.

So what did Microsoft do? You got it. It developed a keyboard.

It’s a small bluetooth variety engineered by the Microsoft hardware group. It folds up into a fairly small footprint to fit neatly in brief case or purse, but it’s another part of their total keyboard obsession. Instead of making Office fit the phone touch screen, it invented a keyboard to make it work better on a phone.

Next it will probably build a small wireless mouse to complete its whole vision of mobile device as a PC in a small package.

This is such an elegantly short yet well-observed piece. And captures it all. The commenters are furious because obviously he typed it. I wonder how much real typing they do. Perhaps too much. Journalists typically type at least a thousand words a day; I wonder how much the average Office user types. Any data out there?

Carolina Milanesi asked the Kantar panel of consumers for their views:

Consumers in the 25 to 34 year bracket are the most favorable to tablets, with 2.9% planning to purchase one as a replacement for their PC. Consumers 16 to 24, are the most open to convertibles (3.5%) most likely because they’re still in their school years,

Also asked about virtual reality, to sniffy answers. But you could have asked people if they wanted to surf the web and get email on the move in 2006 and got similar uninterested answers. Asking consumers about future technologies isn’t always meaningful without clear use cases.

Samsung Electronics will begin to market its newly released flagship smartphone the Galaxy S6 starting April 10 and expects sales to outperform the Galaxy S4, the vendor’s best-selling model so far, according to Andy Tu, general manager of Samsung’s mobile communication business in Taiwan.

Samsung has responded to criticism of the Galaxy S5 with great changes in terms of design and materials, expecting the new design to bring in significant replacement demand for the Galaxy family products, Tu said on the sidelines of a pre-MWC 2015 event.

Samsung will focus on promoting two flagship models, the Galaxy S6 and Galaxy Note 4, plus mid-range A- and E-series Galaxy models from the second quarter of 2015, Tu revealed.

In all the oceans of electrons splurged over the Samsung S6+Edge, I didn’t see a single one where a Samsung executive was asked whether it expected these to sell more, the same or fewer.

If Digitimes is doing better journalism than the people at MWC..