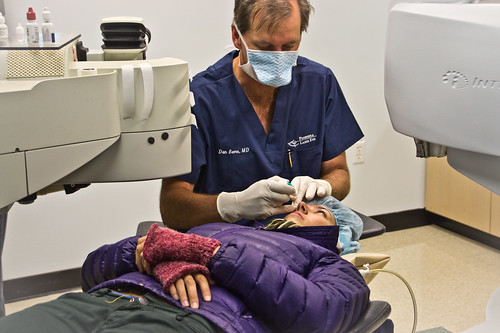 “Your first day at Google?” “Mm-hm. Thought I’d get the eye surgery done first.” Photo by peretzp on Flickr.

A selection of 7 links for you. Contains 50% less sugar. I’m charlesarthur on Twitter. Observations and links welcome.

Our goal is to make it incredibly straightforward to get data into the Wolfram Data Drop from anywhere. You can use things like a web API, email, Twitter, web form, Arduino, Raspberry Pi, etc. And we’re going to be progressively adding more and more ways to connect to other hardware and software data collection systems. But wherever the data comes from, the idea is that the Wolfram Data Drop stores it in a standardized way, in a “databin”, with a definite ID.
Here’s an example of how this works. On my desk right now I have this little device:

Every 30 seconds it gets data from the tiny sensors on the far right, and sends the data via wifi and a web API to a Wolfram Data Drop databin, whose unique ID happens to be “3pw3N73Q”. Like all databins, this databin has a homepage on the web: http://wolfr.am/3pw3N73Q.

The homepage is an administrative point of presence that lets you do things like download raw data. But what’s much more interesting is that the databin is fundamentally integrated right into the Wolfram Language. A core concept of the Wolfram Language is that it’s knowledge based—and has lots of knowledge about computation and about the world built in.

Neat idea, aimed at the Internet Of Far Too Many Damn Things.

On January 14th, my friend Ian Ownbey sent me a direct message on Twitter about a freelance design project. It turns out he was working on a small iOS app with his friend Jason Goldman and they were looking for a designer to help them wrap it up. At the time, I was in the middle of a substantial iPad design project for another client, but I really wanted to work on something with Ian and Jason. Luckily, since their project was small, I was able to squeeze a week of time for them in the middle of my other project.

Things I particularly noted (not particularly being an app developer, but interested in process): (1) they used Slack (2) they didn’t go with an iOS 8 Extension, and the only people who’ve queried that are techies. Pretty much nobody else cares. File that thought away.

A a side note, I find myself reading more and more stuff on Medium, and finding good quality.

Neat: shows you Apple Watch apps as they’re added to the store and also shows how they will look when used. I haven’t seen a killer app for me there yet.. but there are only a few.

Do all Google employees have perfect eyesight? » Terence Eden’s blog

Eden is unhappy with Lollipop, and particularly its design choices:

I can only assume that on their first day at Google, new employees are given their Android phone, a ChromeBook, a self-driving car, and complementary Laser Eye Surgery. That’s my theory on some of the problems besetting Android’s Lollipop release.

I’ve ranted about Lollipop before, and now I’d like to point out two particular problems.

All of these tests were performed on a Nexus 4 running Android 5.0.1, and the most recent versions of the apps.

In short: poor text wrapping in Google’s default web browser; and, more annoyingly, poor contrast between background and text in Google apps such as YouTube, Play and the General Settings menu. Remember, this is a Nexus, not some skin. Eden’s conclusion:

Lollipop is, for a large section of the population, really unpleasant to use.

I know I’m not the only person who has spent a lifetime working at a screen and appreciates legible text.

They wanted to make a phenomenon. They made $10m » Polygon

Unlike many of its contemporaries, nothing about Crossy Road makes a player feel the need to pay to progress or win. Its design subdues its monetization, and that has cost its developers revenue. Crossy Road rarely — if ever — squeezes onto the top of the iOS App Store’s list of highest grossing games, where titles like Clash of Clans and Candy Crush Saga are entrenched. Yet yesterday, Crossy Road was the 12th most popular free iPhone app without even appearing in the App Store’s list of top 100 grossing iPhone apps.

This is not an accident. Crossy Road was an experiment in doing free-to-play differently, and that experiment has been wildly effective.

Today, at a Game Developers Conference 2015 session, Hall and Sum told the story of Crossy Road’s creation and lifted the veil on its real success during the game’s first three months. They revealed that, 90 days after its release, Crossy Road’s combination of solid gameplay, unobtrusive in-app purchases, and optional in-app ads powered by the Unity engine, has earned $10m from 50m downloads.

A real lesson in the power of mobile’s reach. An average of 20 cents per install – and that’s probably skewed towards the high end, meaning 45m downloads probably paid nothing, or next to it.

Taking a bunch of seasonal smartphones, like the iPhone 6, HTC One M8, LG G3, Nokia Lumia 1020, Samsung Galaxy Note 4, Sony Xperia Z1 Compact and Sony Xperia Z3, photo aficionados from Poland have snapped a bunch of samples in sunny Morocco, and then given them to professional photographers for ranking purposes.

The experiment has been a blind one, meaning that the shutterbugs didn’t know which picture came from which phone, just like we often do in our comparisons. The list of experts includes prominent lecturers and even editors of photography magazines, so it is as representative as it could be when it comes to accurately judging the true quality of the snaps.

Usually these things are a bit pointless, but the variety of devices and the variation in what does best in which conditions is surprising – the Note 4 does extremely well, the Lumia doesn’t, despite the latter’s huge pixel count.

The Leap is a buttonless touchscreen smartphone that looks like a lot of other mobile slabs on the market. Expected to be priced at around $275 (U.S.) without a subsidy, with an industry-standard five-inch display, a 2800 mAh battery promising 25 hours of use and a processor that first shipped in 2012, it’s a budget device designed for the mid-market.

“That’s directly where they are aiming, but they are still priced outside of that spectrum,” warns Mr. Reith, who said middle-market devices are selling for under $200. The Z3, unveiled at last year’s MWC, was also pegged as an emerging-market touchscreen device, but failed to gain traction. “In terms of moving commoditized handsets, this is a dying part of [BlackBerry’s] business.”

CEO John Chen has said that if BlackBerry can’t sell 10 million phones a year, it shouldn’t be in the hardware business. Mr. Reith said IDC projects BlackBerry will sell seven million or eight million devices in 2015.

Hard choices lie in BlackBerry’s near future. Chen is clearly trying to shift the BlackBerry software over to other platforms so that he can extricate the company from the loss-making hardware business while keeping customers in valuable software and service contracts.