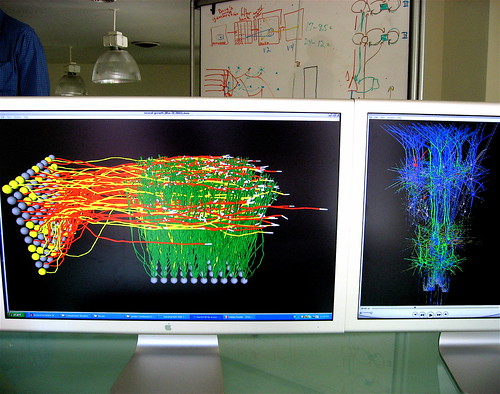 Probably a neural network, but you might need one to look at it to be sure. Photo by jurvetson on Flickr.

A learning device implies that it will not only pick up on what you usually do, but it will also: 1) allow you to change, and 2) absorb those changes. My Nest learned quite well, but then stopped learning. It remembered but it didn’t look for variations or adapt. It was the equivalent of a printed textbook: Facts, correct or not, become law if written in there and thus will be taught that way until the school chooses a different textbook.

When I turned the dial to increase the heat to 66 degrees, rather than responding by making the house warmer, or by informing me that it is now working toward this, it read, “in 1 hour and 20 minutes 66 degrees until 10:00PM.” The next day the house temperature plummeted to a punishing 50 degrees (I realize I may be spoiled) for no reason I was privy to. Here, by the way, is another usability heuristic not heeded: visibility of system status.

Try as I might, it won’t listen. So I pull on another sweater (a la Jimmy Carter) and mittens and a hat. Indoors. In my home. I am serious. And I wait until my thermostat decides that I am worthy of radiant warmth.

Temperatures in Fahrenheit, obviously. Given Pernice’s provenance, maybe Nest should call. (This is the second heavily critical article about Nest in the past few days; the other was about its smoke alarm, from a Google employee.)

The believers » The Chronicle of Higher Education

Fantastic article on how neural networks have swung in and out of fashion, profiling Geoff Hinton, of the University of Toronto and Google:

Before [the researchers] won over the world, however, the world came back to them. That same year, a different type of computer chip, the graphics processing unit, became more powerful, and Hinton’s students found it to be perfect for the punishing demands of deep learning. Neural nets got 30 times faster overnight. Google and Facebook began to pile up hoards of data about their users, and it became easier to run programs across a huge web of computers. One of Hinton’s students interned at Google and imported Hinton’s speech recognition into its system. It was an instant success, outperforming voice-recognition algorithms that had been tweaked for decades. Google began moving all its Android phones over to Hinton’s software.

It was a stunning result. These neural nets were little different from what existed in the 1980s. This was simple supervised learning. It didn’t even require Hinton’s 2006 breakthrough. It just turned out that no other algorithm scaled up like these nets. “Retrospectively, it was a just a question of the amount of data and the amount of computations,” Hinton says.

The deal will see Verizon Wireless, T-Mobile and AT&T pre-install Google Wallet on their Android phones in the U.S. later this year. Google Wallet allows shoppers to tap their phones to pay at checkout in some brick-and-mortar stores in much the same way Apple Pay does. The move also involves Google buying some intellectual property from Softcard, formerly known as ISIS. It doesn’t appear that any Softcard employees are joining Google as part of the deal.

In a blog post, Softcard said its users can use their mobile payments app for now. But I can’t imagine the wireless carriers behind the Softcard joint venture would agree to this deal if they planned to continue to invest in their own app. Sounds like game over for Softcard, a very expensive multi-year initiative that was essentially a flop for the wireless companies involved.

The purchase of Softcard (if not the abandonment of its staff) had been expected, but the preinstallation on Android phones is a smart deal.

What your online comments say about you » NYTimes.com

Dr. Moss-Racusin said that her team was surprised by how split the commenters were: “The same sort of objective evidence really struck people quite differently.” She and her team are now studying the reasons behind such differences: “what factors might lead certain people under certain situations to be more swayed by scientific evidence, particularly evidence that points to some inequities between different social groups.” One theory, she said, is that when people feel threatened by evidence, “they may be a little bit less receptive to it than when it already fits into their existing worldview, their way of thinking about social relations.”

“Threatened by evidence”. There’s a phrase to conjure with. (Via Mary Hamilton.)

With the world counting down to April 2015 for Apple Watch launch, attention turns to the best apps that will make or break this landmark device.

I think the launch will actually be in March, with shipping – as Tim Cook said – in April. (The delay lets Apple take preorders, evaluate demand, and, ah, also helps those camera-magnet queues.) I wrote about what developers aim to do with apps on Apple Watch for The Guardian.

Two or three times a day in almost 60 cities across America, thousands of police officers line up for roll call at the beginning of their shifts. They’re handed a marked-up map of their beat and told: Between calls, go to the little red boxes, each about half the size of a city block. The department’s crime analysts didn’t make these maps. They’re produced by PredPol, a “predictive policing” software program that shovels historical crime data through a proprietary algorithm and spits out the 10 to 20 spots most likely to see crime over the next shift. If patrol officers spend only 5% to 15% of their shift in those boxes, PredPol says, they’ll stop more crime than they would using their own knowledge.

Less Minority Report than quick primer for newbie cops, it seems. Even so…

Kas Thomas has been having a look at Google’s General & Administrative [G&A] spending:

With ad revenues levelling off and expenses skyrocketing (G&A has quadrupled in 5 years), Google is headed for a financial meltdown, and when it happens, the company will need to shave $2bn a year off its $16bn/yr in R&D and G&A costs, which means, if we count the fully burdened cost of a Google employee at $200K per year, it needs to shave 10,000 jobs.

Google has $100bn in the bank, so the situation is hardly dire, but Wall St. likes to see expenses cut by some other method than hauling money out of the bank. They like to see a sound Income Statement, and very soon, Google’s Income Statement will be anything but sound.

On a percent-of-income basis, Google outspends Apple on R&D six-to-one. Where is that money going? Driverless cars, Google Glass, body odour patents. Stuff that doesn’t have a chance in hell of generating revenue any time soon. On the one hand, Google is to be credited with thinking long-term, something American companies don’t tend to do very well, but on the other hand, Google needs to execute well on the revenue side. Right now, most of its revenue is tied to search ads, which are receding in relevance. It competes, in the cloud space, with Amazon (which no one should have to do). Will that save the company? No. It would have, already, if it were going to.

This is hard to argue against, though Google could just ignore Wall St and report lower profits.

“With consumers in mature markets upgrading their smartphones every 18 to 20 months the inevitable question is what happens to the old device?” said Meike Escherich, principal research analyst at Gartner. “While only 7% of smartphones end up in official recycling programs, 64% get a second lease of life with 23% being handed down to other users and 41% being traded in or sold privately.

“This rise in smartphone reuse will impact not only the sales of new units, but also the revenue streams of all those involved in the smartphone supply chain,” continued Ms. Escherich. “Stakeholders that are already participating in take-back or trade-in programs need to have a strategy for turning used devices into a positive asset. Others — particularly high-end phone original equipment manufacturers (OEMs) — need to take a closer look at this market in order to evaluate the impact these secondhand devices will have on their market positions and revenue streams.”

With nearly two-thirds of replaced smartphones being reused, continued demand for high-end used devices will increasingly impact primary-unit sales, and motivate phone providers to look into the secondhand market. In North America and Western Europe, the market for refurbished phones is forecast to be worth around $3bn in 2015 and growing to $5bn in 2017. Many users are attracted to used high-end devices that they would not have been able to purchase at the original selling price.

Next question is whether there’s any difference between platforms over hand-me-downs, and life cycle length.