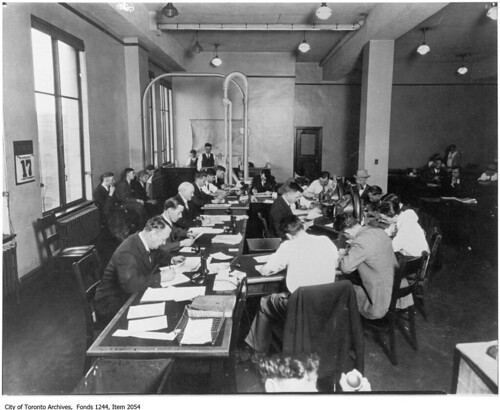 Pretty sure they’re not rewriting that week’s New Yorker. The Toronto Star newsroom in December 1930. Photo by Toronto History on Flickr.

Ian Parker’s magnificent profile of Jony Ive (and to a lesser extent Apple) in the New Yorker has received lots of attention – mainly from journalists at a multitude of news outlets who each spent a jolly hour or so filleting it for 23 Things You Maybe Didn’t Know But Might Be Persuaded To Read Because They’re In The Form Of A List Rather Than A 17,000-Word Article.

What’s been largely overlooked is the sheer amount of work done by Parker in putting this together. Clearly, Apple’s PR people played an important part: they set up at least three interviews with Ive (some time in late July/early August; the day after the iPhone release; some time later when they go to see the new campus being built). There’s also an interview with Tim Cook, whose time isn’t exactly limitless.

That’s 11 people beside Ive and Cook, and that’s only inside Apple.

Now here’s a list of the people Parker spoke to outside the company:

That’s another 11 people, of varying difficulty on access. (He also has a brief conversation with Heather Ive, Ive’s wife, but it hardly counts as an interview. It’s not clear from the text whether he communicated with Paul Smith to verify something about the contents of notes, but you can bet that – this being the New Yorker – the point did get fact-checked.)

One score and three

In all, that’s 24 people with whom he had longer or shorter interviews. And there’s also a hell of a lot of reading and information mixed in there – worn very lightly (such as the point about how much profit Apple makes during a 25-second pause, or how quickly phones were coming off Chinese assembly lines as Tim Cook announced them). Deciding what parts of 24 interviews to use (once you’ve transcribed them, of course) and what to throw away, plus what part of the observations around them to use (Jony Ive’s manner), and then simply writing it and getting it straight, and through fact-checking, subbing, and editing, is a huge task. At that length, it’s a short novella.

Parker’s reward? I’m sure that a ton of people have read the article and learnt from it. Lots of people have done rapid rewrites of salient bits of it, but the only piece of journalism has been Parker’s, in the first place. Sure, Apple gave him access, and lots flowed from that.

Sure, Apple chose to set it up – and this is the first substantial piece about Apple I’ve ever seen in the New Yorker, which I’ve been reading for decades – but the company wouldn’t have been able to dictate the content or conclusions; notice Parker’s sardonic take on Cook’s comments about how the forthcoming Watch, which Cook was wearing, would be all about notifications: “I noticed that, at this moment in the history of personal technology, Cook still uses notifications in the form of a young woman appearing silently from nowhere to hold a sheet of paper in his line of sight.”

And the access that Parker managed to get to other people? Clearly, he was helped by the name of the New Yorker (and quite possibly some nudging from Apple to people like Powell Jobs and Bob Mansfield).

Views differ. So go and find some

But the contrast between Parker’s in-depth cover-the-bases profile, and the many pieces that get thrown off every day on news outlets, where the writer doesn’t bother to get an opposing, or a neutral, or indeed any outside view about a piece of information – bugs me often. When I worked at New Scientist, it was an ironclad rule (and I think, reading it, still is) that in any news piece you were writing, you had to get an outside opinion about whatever marvel had been unveiled, whether it was the birth of the universe or the discovery of a new species of beetle under a log in the Amazon. As a writer, this put one to the test, and the stress was only magnified at a daily paper when one had to be able to find people willing to do similar things to tight deadlines.

Yet those outside voices play an important part in news: they counterbalance, and stop the pell-mell rush towards what can otherwise be the recycling of press releases. It dismays me when, as often happens, a Big Company announces something which is both (a) years away from fruition (b) being spun furiously for its “innovative” potential, and then sees yards of approving writeups in which no news editor has thrown the copy back at the writer and said “No. Go back and find someone – preferably two people – with an opinion about it.”

Yes, I know, web deadlines, bla bla bla. I cleave to the view that if someone else has already written the story, your job as a journalist/writer is to move the story on – do something more, get a new perspective, find out something new, unearth the fact nobody else has brought to light.

This applies even more when everyone’s rushing to put something, dear god anything, online so Google News will anoint it as this minute’s top story. If you move the story on, then you become the one they look to. Quality will tell because monkeys (well, software) will eventually eat those jobs doing rewrite anyway. Look, a company that automatically writes sports and finance stories just sold for $80m. It’s coming for your listicles next.

Parker, obviously, demonstrates that quality becomes a virtuous circle. Do it well, and you get better access. But you have to do it well in the first place.

9 thoughts on “Committing acts of journalism: the New Yorker profile of Jony Ive”