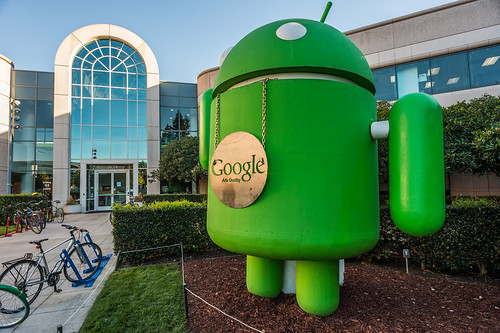 Seems the EC is going to charge Google with antitrust violations over Android. Photo by Geoff Livingston on Flickr.

You can now receive each day’s Start Up post by email. Confirmation link first, so no spam.

A selection of 10 links for you. Just a little short of Avogadro’s number. I’m charlesarthur on Twitter. Observations and links welcome.

Marc Burrows was head of the Guardian’s comment moderation team for five years:

»Ultimately, the biggest problems in comment threads come down to “agenda trolls”: the people so convinced they are right that they ride into a conversation not to join it, but to rip it apart.

They are easy to spot: they are the users who will scream “LIAR!” when they mean, “I think you’re wrong”, the ones whose arguments never quite seem to match the comment they are addressing, who resort to insults and TALK IN CAPITALS. You can’t win against those people, because they never truly believe they have lost.

They are comment-thread poison – men’s rights activists who act as if articles about women’s issues are their gender’s single biggest problem, climate change deniers who will drag any conversation about energy policy into murky pseudo-science, and borderline racists for whom there is no issue that cannot be pinned on immigration (UK) or black people (US). It is often known as “whataboutery” and is a tactic designed to throw a conversation off course.

Burrows was terrific at his job (which obviously includes leaving comments alone as well as deleting them). This long piece points to the benefits of comments, which absolutely do exist, as well as – like here – the disbenefits, and the problems of making them add value to the article above.

I think it’s that which nobody has quite solved: how to make comments below an article add what’s above. Not only do you need intelligent commenters who want to add value, you need a way for that value to be recognised. It’s notable that the number of articles on the Guardian open for comments had reduced drastically in the past 18 months.
link to this extract

»On the opening day of the week-long event, the IAB hosted a panel session entitled ‘Ad Blocking: A New Deal or a Modern Day Protection Racket?’ where representatives from the indsutry’s buy and sell-side, were joined by privacy and ad blocker advocates to debate the issue.

Tim Gentry, The Guardian’s global revenue director, told attendees the title had recently become “far more persistent” in its charge to counter the effect of ad blockers, and this strategy could eventually include blocking access to content if it detects a user has one installed on their browser.

“With a small section we’ve tried to be far more persistent, asking them to either whitelist us, pay to become a member, tell us you’re a subscriber, and with a small sub-sect of people we’ll start to block access to content,” he said.

“What we’ve seen is that up to two-thirds of ad blocker users are willing to whitelist us, because they want quality content,” added Gentry.

Guy Philipson, CEO, IAB, UK, also recounted how “six-or-seven” publishers were exploring the option of following a similar approach adopted by French and Swedish publishers to act in unison to request that users either whitelist them or switch off their ad blockers altogether, or else be refused access to content.

The incremental moves by the publishers here are like a chess game where they’re unsure of the strength of their opponent. Ask nicely? Block back? Offer alternatives? The problem is that no tactics works on more than a third, or fewer, of those who use adblockers. So who’s “winning”?
link to this extract

»Canada’s Competition Bureau said on Tuesday that it was dropping an investigation into Google after saying in 2013 that it suspected the company was abusing its dominant position in online search.

The watchdog said it had found evidence to support one of the allegations against Google but that the company had already made changes to remedy those concerns and agreed not to reintroduce anticompetitive clauses in its contracts.

The Bureau said it did not find sufficient evidence of a substantial lessening or prevention of competition in the market to support its other allegations against Google, now a unit of holding company Alphabet Inc.

That’s the good news. Now for the bad news…
link to this extract

Google expects the charges to drill down on its Android distribution agreements, according to one of the people, who requested anonymity because the company’s position isn’t yet public.

The Commission is concerned that some of Google’s terms and conditions unnecessarily restrict phonemakers, giving Google’s own apps — from search to Gmail to maps — an unfair advantage.

You could say “popcorn!” except that this will follow this pattern: (a) a charge sheet from the EC (b) a rebuttal blogpost from Google (c) complete silence for a year or more while nothing happens.
link to this extract

»Choi [Seung-woo] was one of thousands — the homeless, the drunk, but mostly children and the disabled — rounded up off the streets ahead of the 1988 Seoul Olympics, which the ruling dictators saw as international validation of South Korea’s arrival as a modern country. An Associated Press investigation shows that the abuse of these so-called vagrants at Brothers, the largest of dozens of such facilities, was much more vicious and widespread than previously known, based on hundreds of exclusive documents and dozens of interviews with officials and former inmates.

Yet nobody has been held accountable to date for the rapes and killings at the Brothers compound because of a cover-up orchestrated at the highest levels of government, the AP found. Two early attempts to investigate were suppressed by senior officials who went on to thrive in high-profile jobs; one remains a senior adviser to the current ruling party. Products made using slave labor at Brothers were sent to Europe, Japan and possibly beyond, and the family that owned the institution continued to run welfare facilities and schools until just two years ago.

Even as South Korea prepares for its second Olympics, in 2018, thousands of traumatized former inmates have still received no compensation, let alone public recognition or an apology. The few who now speak out want a new investigation.

The government opposes it on the grounds that the evidence is “too old”; an official said “there have been so many incidents since the Korean War.” Astonishing investigation, aided by still-extant government documents and living people.
link to this extract

»Welcome to a new way to start your day. Shot directly through Magic Leap technology on April 8, 2016 without use of special effects or compositing.

I watched this, and immediately I thought “yup, I’ve seen that thing where notifications you’d rather deal with on your phone are shown to you floating in mid-air. What was it? Oh, I know…”
link to this extract

»This is an early concept video that was made when Project Glass was just getting started. While a lot has changed since then, our motivation to get technology out of the way remains the same.

Anyway, if you do want to read about Magic Leap…
link to this extract

»Wired ran an enormous profile on mysterious AR startup Magic Leap today, written by legendary tech journalist Kevin Kelly. It’s incredible, and you should read it, if only because Kelly’s obvious love and enthusiasm for virtual and augmented reality is infectious and energizing.

But the piece also raises many, many more questions about Magic Leap than it answers — and given the extreme opacity that’s surrounded Magic Leap, that’s pretty notable. (To catch you up: Magic Leap is a secretive company that’s raised over a billion in funding from Silicon Valley giants like Google and Andreesen Horowitz, but it’s never given a public demo — most of what we know comes from fantastical pitch decks buried inside patent applications.)

So here are five burning questions about Magic Leap.

Patel raises excellent questions (along the lines of “how the hell does this thing works, then?”). Kelly’s article is breathless as ever, almost to the extent of parody. Patel’s questions are worth asking. (One also thinks: perhaps he’ll get the journalists on The Verge to ask similar searching questions when they do breathless pieces too.)
link to this extract

»The proposed class action lawsuit filed in U.S. District Court in San Francisco by Justin Baker-Rhett contends West fraudulently promised fans that his album, “The Life of Pablo,” would only be available on Tidal. The site charges users at least $9.99 a month, but West’s album has since been released for free on Apple Music and Spotify.

Millions of people flocked to Tidal in February because of West’s new album and the rapper’s promise of exclusivity, giving the struggling site a boost and also a trove of user information, the lawsuit states. Baker-Rhett is asking a judge to order Tidal to delete information collected on users who signed up for West’s album.

“Mr. West’s promise of exclusivity also had a grave impact on consumer privacy,” the lawsuit states, noting that users’ credit card information, music preferences and other personal information have been collected.

The lawsuit contends the value of new subscribers and their personal information could be as much as $84m for Tidal.

That claim by Kanye (who’s a shareholder in Tidal) that it would be Tidal-only was never credible. But of course everyone feigned belief.
link to this extract

»For the listening test I donned my pair of AKG K550’s, a reasonably priced set of “reference” headphones with a 32 ohm input impedance and frequency range from 12Hz to 28KHz.

My impressions of both the regular LG G5’s audio output and the B&O DAC are very positive. The default G5 pumps out a mostly well balanced presentation with plenty of detail and clean sounding highs, although there’s not a huge amount of liveliness to them. The bass can be a little lacking in places, especially in punchier tracks, and, while certainly not narrow, the G5’s stereo output isn’t especially wide. We can attribute this to the handset’s mediocre crosstalk test result, which reveals some bleed between the left and right channels.

I struggled to make out any difference between my “Hi-Fi” files and their equivalent CD quality tracks, but those will a very keen ear will be able to pick up on some differences when listening to their compressed alternatives.

That middle paragraph could be about wine (“clean highs.. liveliness..”) or any other product where people pretend to themselves that they can distinguish indistinguishable things. 12Hz is far below hearing, while 28kHz is far above it.

The G5’s “Friends” idea might get some audiophiles to spring for it, but I don’t see it catching on.
link to this extract