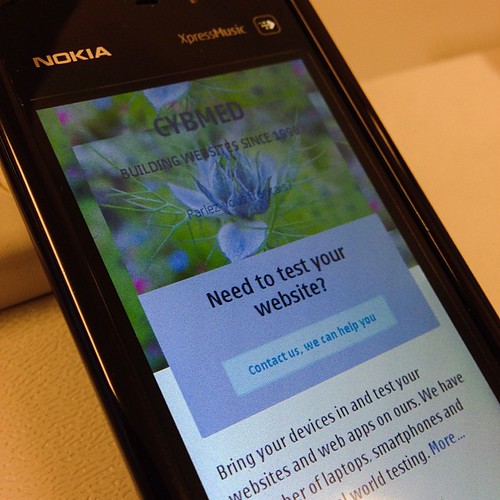 Ahh – a Nokia smartphone. Photo by David Roessli on Flickr.

As diffusion proceeds through each adopter category, the product is re-positioned to address each group’s presumed behavior. Innovators (first 2.5% of the population) are offered novelty, a chance to experiment and uniqueness of experience; early adopters are offered a chance to create or enhance their position of social leadership; the early majority build imitate the leadership of the early adopters and justify it with productivity gains; the late majority are skeptics but, given a set of specific benefits, join the earlier adopters. Finally the laggards reluctantly agree to adopt as their preferred alternative of not adopting disappears.

The theory suggests that a firm can be successful if they modify their marketing and perhaps product mix to accommodate these adopter categories in a timely manner.

If this is the case however, why is it that those who have access to these data (i.e. who is buying and when) not to do the right thing?

Really you have to read it for the graphs, showing the rise and fall of Palm/WinMob, Nokia, Samsung (projected), and the rise of China and India. But what about Apple?

Mobile Innovation: we need to get past the App Store duopoly >> Continuations

Many people have pointed to the amazing commerce integrations in WeChat in China as an example of what can be done. What fewer have said though is that China does not have an app store duopoly. So WeChat has been free to innovate on commerce without having to live in the confines of what Apple or Google deem appropriate (and hence not in conflict with their own ambitions). As far as I can tell Chinese smartphones work just fine and any claim that centralized app stores are required for security or quality control is simply a pretense for wanting to extract more economics. The price of Chinese phones also does away with the claim that cross subsidization is required for adoption or phone innovation.

I thought USV was sure that Android was going to be the only app store anyone would need. Now it isn’t? Also, why not just go HTML5, as some of the commenters suggest?

Huawei, with 30,000 patents in China, is preparing to sue Xiaomi >> Patently Apple

local first-generation smartphone manufacturer rivals in China such as Huawei and ZTE are now going after Xiaomi where they know they’re weak: Patents. With Ericsson’s success against Xiaomi in India, both Chinese rivals are now racing to file lawsuits.

A Korean report tapping into industry sources stated that earlier this week Huawei and ZTE were known to be preparing to sue Xiaomi, OPPO, and Bubugao for infringement of their patent rights.

Earlier, Huawei and ZTE sent out a warning letter to these companies asking them to stop infringing on their patents and pay legitimate royalties. However, as they did not respond, Huawei and ZTE decided to take legal action against them.

An industry source added that “It was confirmed that China’s second-generation smartphone manufacturers had been violating four to five patents related to communications technology, including WCDMA, which is used in 3G mobile communications.”

Huawei and ZTE are strong patent holders, collecting more than 70 percent of relevant royalties in China’s mobile phone market. Huawei has nearly 30,000 of the 39,000 mobile phone patents in China. It has also registered 7,000 patents this year alone.

Oh dear, it’s all fun and games until someone loses an eye.

Micromax—which plans to launch its YU brand with Cyanogen soon—has gone to the Delhi High Court to allege OnePlus is infringing on its exclusive licensing of Cyanogen OS. The court agreed, and now OnePlus is barred from selling, marketing, or even importing its devices in India. Additionally, the company is not permitted to ship any device in India that bears the Cyanogen logo or branding even after it gets the OS situation worked out.

As we recently discussed, OnePlus says it was only notified of the exclusive agreement between Micromax and Cyanogen two weeks before the OPO was to launch in India. It plans to have a custom ROM of its own ready by February, with a beta release sooner. However, the devices shipping in India right now still have CyanogenMod installed. They won’t get official support or updates, but apparently that’s not good enough for Micromax.

Computer tablets have failed to capture the [UK] consumer’s imagination this Christmas — they were tipped to be the biggest festival seller but sales have actually fallen, according to the boss of Dixons Carphone.

Seb James, chief executive of the newly merged phone and electricals retailer, suggested most people already had one and a technology shift was needed before people buy new versions.

His comments come as the company, created from a merger of the Currys, PC World parent and Carphone Warehouse, reported its first set of half-year results since the deal this year.

Sales rose 5% to £5.02bn in the six months to beginning of November. However, the company made a £20m loss before tax, thanks to the £100m spent on the merger — lawyer and banker fees alone amounted to about £11m.

Wonder what form a “technology shift” would need to take to get people buying a new round of tablets.

In a letter to Senator Al Franken, Uber says it accessed a reporter’s account because “She was 30 minutes late” to a meeting and an executive wanted to know when she’d show up so he could meet her in the lobby.

And flash his iPhone at her. And tell her that he was tracking her, according to a report from The Guardian.

As an excuse, it’s lame. As a reason, it’s also lame. That hasn’t stopped Uber’s general counsel saying in the letter that it has a “strong culture of protecting [passenger] information.” Except when it doesn’t, clearly.

And as Franken pointed out in response, the letter doesn’t answer his questions – viz, what “legitimate” business purposes are for accessing customer data inside Uber.

Interactive, and covering pretty much everything available in the US. Helpful if you are a specification freak; otherwise, more of a curio, though one on which you could waste an easy half an hour.

Shifting Freebase over to Wikidata >> Freebase on Google+

When we publicly launched Freebase back in 2007, we thought of it as a “Wikipedia for structured data.” So it shouldn’t be surprising that we’ve been closely watching the Wikimedia Foundation’s project Wikidata[1] since it launched about two years ago. We believe strongly in a robust community-driven effort to collect and curate structured knowledge about the world, but we now think we can serve that goal best by supporting Wikidata – they’re growing fast, have an active community, and are better-suited to lead an open collaborative knowledge base.

So we’ve decided to help transfer the data in Freebase to Wikidata, and in mid-2015 we’ll wind down the Freebase service as a standalone project. Freebase has also supported developer access to the data, so before we retire it, we’ll launch a new API for entity search powered by Google’s Knowledge Graph.

Google bought MetaWeb in 2010; this move, giving the responsibility to the crowd, suggests either that upkeep was too expensive, or that Google has found better ways to do it internally.