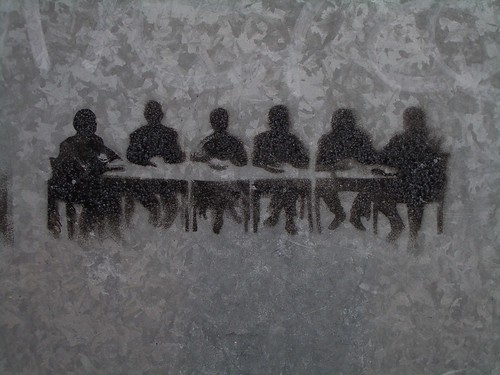 Yeah, you know it’s not really necessary. Photo by clagnut on Flickr.

A selection of 12 links for you. Don’t have a meeting about it. I’m charlesarthur on Twitter. Observations and links welcome.

The chokehold of calendars » Medium

The problem with calendars is that they are additive rather than subtractive. They approach your time as something to add to rather than subtract from. Adding a meeting is innocuous. You’re acting on a calendar. A calendar isn’t a person. It isn’t even a thing. It’s an abstraction. But subtracting an hour from the life of another human being isn’t to be taken lightly. It’s almost violent. It’s certainly invasive. Shared calendars are vessels you fill by taking things away from other people.

“I’m adding a meeting” should really be “I’m subtracting an hour from your life.”

Six weeks after a coalition of consumer advocates accused Google of using ‘deceptive and unfair’ ads in its YouTube Kids app, the same group is raising new concerns about access to videos that are inappropriate for children.

The coalition, which sent a letter to the Federal Trade Commission on Tuesday as a supplement to the previous complaint, includes the Campaign for a Commercial-Free Childhood and the Center for Digital Democracy.

The groups allege that the app, which is marketing to children ages 5 and under, allows kids to access inappropriate videos — including some that have nothing to do with children at all. Some of the unrelated videos are unremarkable, like videos of corporate filings. Others, though, will raise eyebrows with explicit language, jokes about drug use and pedophilia, and frank discussions of pornography, violence and suicide.

Wonder if the FTC will act on this.

The 55-inch wallpaper OLED panel, presented as one of the company’s future displays at a media event, is only 0.97 mm thick, weighs 1.9 kg and can easily be stuck to a wall with a magnetic mat, or removed from it.

Come on, that is impressive. Imagine how you’d use that at home.

In fact, $300m of debt, rather than venture capital, as Bloomberg discovered. Dan Primack explains:

For BlackRock, this is obviously an effort at risk mitigation. For Jawbone and its existing shareholders, it’s a bit more complicated.

Yes, Jawbone clearly needs BlackRock’s money. But structuring this deal as debt instead of as equity also allows the San Francisco-based company to maintain a $3bn valuation it reportedly received last fall. That means it needn’t reprice existing employee stock options, and gives it upside flexibility when recruiting new employees. Plus, Jawbone doesn’t take the kind of ‘falling unicorn’ PR hit that could cause potential customers to purchase from more stable vendors.

My spidey sense feels that Jawbone is stuffed, though – especially when you compare it to the hugely profitable Fitbit.

In an effort to distinguish itself, Apple investigated various display technologies.

In the mid-2000s, it created a prototype display that was transparent, like a pane of glass, when turned off but used lasers to display an image when turned on, according to a person familiar with the matter. That technology never made it past the research phase because it used an enormous amount of power and the image quality was poor. Apple patented the technology in 2010.

Apple had a small team working on the TV set in the years before it put the project on ice, said people familiar with the matter. It considered building TVs with screens offering four times the resolution of high-definition displays.

The price of such 4K displays—named because they have about 4,000 horizontal pixels in an image—have come down in the past few years, but those screens were still prohibitively expensive at the time.

Apple also looked at features that could expand the television’s function in the living room. Using cameras above the screen, Apple experimented with a video-calling feature—described as FaceTime for the television—that sensed who was talking and directed the camera to the speaker. In the end, the people familiar with the matter said the feature didn’t seem compelling enough to drive an entry into a new product area.

Truly sounds like a dud, to be honest, but you can imagine some companies putting it out because WE ALREADY SPENT A TON ON R+D HERE DAMMIT. (A great scoop by Wakabayashi, too.)

Sometimes, tweets might not appear at all. We asked Google about why tweets might show, what controls exactly where they show, if they’re showing all tweets for a query in chronological order or filtering in some way such as to block obscenity or to surface more popular tweets. The company wouldn’t answer any of those questions.

It’s a great way to get real-time info when something is happening. And it’s another way for organizations and people on Twitter to reach a global audience at the most relevant moments.

So presumably, you’re more likely to see tweets in Google when a hashtag, topic, person or organization appears to be trending or is newsworthy.

Twitter also says there’s no “direct” monetisation. (But of course it gets traffic.) Useful deal for both companies. I can only see them getting closer; their interests are aligning more and more.

Liveblog: What would you do if you woke up one morning and there was no Internet? » Liveblog

A question that reveals the problem is to wonder what would happen if you woke up one morning and found there was no electricity. Not much would happen in the world as it’s currently configured without electricity, even though there was a time when it worked fine without it.
I think the Internet is sufficiently integrated into our civilization at this point that if it were to be removed, it would be such an enormous shock to our economy that.. well, that’s why #2 [“Cry”] is also a correct answer. 😉

When you reflect on it, this is a great question to pose.

Samuel Reed’s site needs to be visited. It builds itself while you watch. (Don’t worry, it’s HTML5.)

“The sales of the Galaxy S6 series have already surpassed 10 million,” a high-ranking Samsung official said. It marked the first time for the company to confirm the sales figure of the latest flagship.


The Galaxy S6 boasts Samsung’s first built-in wireless-charging batteries. The offbeat Galaxy S6 Edge also has been grabbing the market’s attention with the industry’s first screen that is curved at both the left and right edges. They started official sales on April 10.

The new models’ predecessors, the Galaxy S5 and the Galaxy S4, meanwhile, sold more than 10m units in less than a month. Samsung did not clarify when the 10m sales mark was reached for the Galaxy S6.

To be clear, the timings from “on sale” to 10m were:
S2: five months
S3: 42 days
S4: 27 days
S5: 25 days
The S6 doesn’t seem to have moved faster. But these are all sales to carriers (who may be feeling reluctant to take on stock) rather than sell-through. This story has barely begun.

Here’s how they built the beastly machines for Mad Max: Fury Road » The Credits

A specific challenge designing the vehicles was achieving aesthetic qualities as well as functionality. Our vehicles had to look amazing, but beyond that, they also had to drive safely at speed!

I’ll use a the GigaHorse for example. The Gigahorse was a stacked pair of Cadillac bodies, powered by a pair of Chevy 502 engines. So it obviously looked intimidating, but how did it actually drive? Engineer Antony Natoli and mechanic Mark McKinley designed a system so the two engines sat in a side by side arrangement and were connected to the transmission. I modelled the system in AutoCAD, and from this file, the plates and components were waterjet cut.

The three problems with Android Wear » Beyond Devices

One of the selling points of Android Wear is its tight integration with Google Now, which has been available for quite some time on smartphones but is only now becoming available on smartwatches. The theory here is good: Google Now is supposed to surface information just when it’s likely to be useful to the user, but the watch allows it to be presented in a much more immediate way than were the user to have to dig through their phone to find it. But the problem is that Google Now, in my experience, still presents information much more on a “just in case” basis than a “just in time” basis, and the stuff that’s “just in time” is often not all that useful.

Paul Carr in a lengthy dig into Rachel Whetstone’s move from Google to Uber:

Everyone in UK politics who I asked about Whetstone was agreed on one thing: She’s the person you bring in if you need to convince everyone that your company isn’t quite as nasty as it appears, and if your current spin doctors aren’t delivering the results you want. First that was Google, and now comes the biggest challenge of her career: Uber.

I have low hopes when it comes to the American business press covering Uber, but even I was surprised at how few journalists bothered to share even the most basic details of Whetstone’s background with their readers. That stuff sits barely below the surface and speaks volumes about the famously ultra-libertarian Travis Kalanick’s decision to replace Plouffe with her at Uber: an Obama liberal booted upstairs to make way for a multi-generation Cameron conservative/libertarian.

There’s more – much, much more.