There have been a number of articles recently with horror stories of unscrupulous developers who essentially con people into signing up for subscriptions to apps on the App Store; these can rake in huge amounts of money.

Of course you’re thinking: I don’t do that! I’d never fall for it. (Postscript: see my update at the end.)

But you can. As Sarah Perez writes,

They do this by intentionally confusing users with their app’s design and flow, by making promises of “free trials” that convert after only a matter of days, and other misleading tactics.

So because it’s important to know how to find out whether you’re on a subscription, here’s how to find it in iOS. (Here’s Apple’s page explaining how, but mine has nice pictures.)

First, go to Settings. There’s your account at the top: press on that. This takes you to the Apple ID area.

You want to press on the “iTunes and App Store” one: 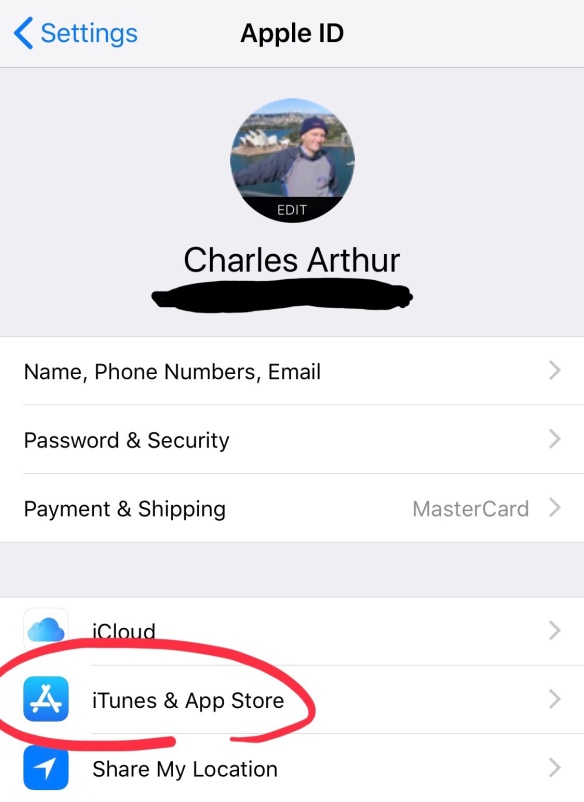 This will take you through to a screen where the top link – though it doesn’t necessarily look like a link – is your Apple ID. (It’s in blue, so that tells you it is a link.) Press it.

OK, we’re nearly there! Now you want to choose “View Apple ID” from the menu below:

And now there’s yet another page: you want to go to the bottom of this, where it says “Subscriptions”. Press that.

Congratulations! You’ve beaten the boss level and your prize is to see what you’re subscribed to. 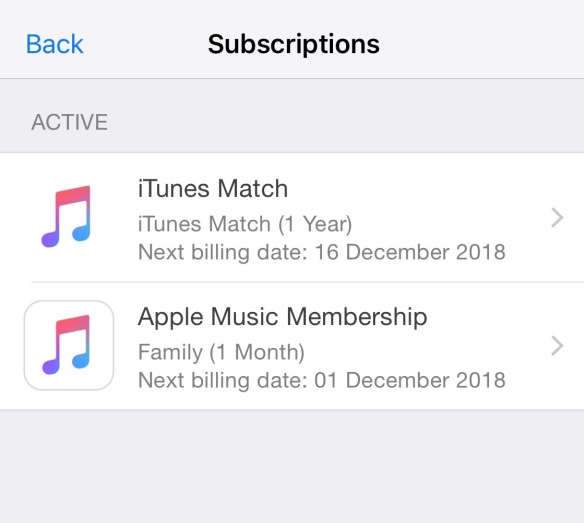 Hmm, looks like I don’t have any dodgy subscriptions that I ought to be worried about. But if there is something there you don’t like or don’t recognise, then press on that and it will take you to a page which will allow you to cancel the subscription immediately. It won’t tell you when you signed up, nor how much you’ve spent on it – both pieces of data that arguably would help in tracking back on scams – but at least you can stop it.

Now, this will probably strike you as pretty complex. Nobody’s going to come across that screen by accident; it’s quite possible that you wouldn’t come across it even if you were searching for “Subscriptions”, because a search in the Settings doesn’t show it up. Nor do my subscriptions to Apple Music and iTunes Match show up in the settings for Music. Your subscriptions are really hard to find.

This is bad in all sorts of ways, but it’s indicative of how subscriptions have sneaked up on Apple almost without it realising – even though adding subscriptions to apps was A Big Thing, back in 2011, and then again in 2016 when Apple revised the terms to make it easier to make money from them.

There are already good ideas about how this should be tackled. I liked this suggestion on Twitter from Trevor Phillippi (who is a product designer at Facebook):

His comment was “I’d love it if iOS did something like this. I just checked my subscriptions and wow, I’ve been passively wasting a bunch of money.”

He’s absolutely right: it wouldn’t be that hard to institute a monthly check of what you do and don’t use (that information is onboard the device) and what you’re signed up to (that info isn’t onboard; you can confirm this by putting your phone or iPad on Airplane mode and trying to access the “View Apple ID” info).

One obvious objection to this is that you might not be accessing the app you’re subscribed to on one device, but you are on another – a classic example would be Netflix: you don’t watch it on your phone but you do on your iPad. This is another reason why it’s Apple which has to institute this procedure, since (again) it will be able to see usage data. (We can get into the thickets of “you don’t use this app on your devices but someone else in your Family group does, so is that OK?” But first let’s fix this.)

There’s one small wrinkle, though truly for Apple it shouldn’t be. With hardware sales slowing, Apple has been pushing the narrative of its growing Services business with Wall St and hence investors. Subscription revenues, and Apple’s 30%-15% (in the second year and onwards) cut, feed into that Services chunk, which is now the second-largest source of revenue after iPhones. (It’s a long way behind, but growing quite fast.

Telling people that they’re not using subscriptions which they’ve signed up to would surely lead to more discontinuations, which means less money for developers and for Apple’s Services business. But where that churn is caused by fakes, this is a net positive for Apple. Users will feel reassured that Apple is looking after their interests, and discouraging scammy apps. Apple would also be able quite easily to spot apps which suddenly have above-average numbers of subscription discontinuations, and investigate them. Less money, but more trust; Apple isn’t going to miss $14.3m per year, but the people who didn’t realise they were signed up to a document scanning subscription service will be happy for it.

All that starts, though, with making it easier in the first place to find what the hell you’re subscribed to. Apple needs to create a “Subscriptions” tab in Settings that isn’t buried multiple layers down.

We’ve been here before: in-app purchases (IAPs) quickly gained a terrible reputation, and it took multiple pieces of bad publicity before Apple, and Google, and Amazon acted to make it harder for kids to run up four-figure charges on their parents’ credit cards. Subscriptions are just the new front in the forever war against bad actors on the app stores. But as with all the previous ones – non-functional apps at ridiculous prices, ripoff apps at ridiculous prices, spyware apps at rock-bottom prices, IAPs – it’s a battle that Apple needs to win in order to keep the confidence of its customers.

Postscript: after this was written and published, two people got in touch to point out that I don’t need both iTunes Match and Apple Music subscriptions: Apple Music will now do the things that iTunes Match used to. (It didn’t previously – I’ve had iTunes Match for years – but as this iMore article points out, since 2016 it does.) As pictured.

So not only has this post (I hope) saved some people some money, it has saved me some money. I’d call that a success.