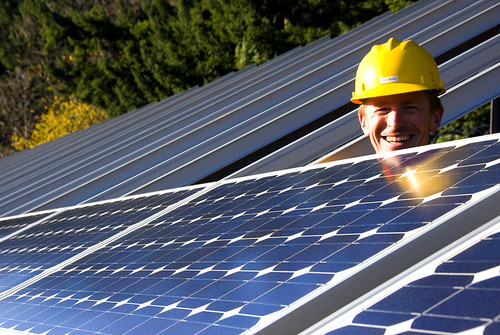 Solar is a big employer in the US – bigger than coal, new data shows. Photo by OregonDOT on Flickr.

The high-tech war on science fraud • The Guardian

One morning last summer, a German psychologist named Mathias Kauff woke up to find that he had been reprimanded by a robot. In an email, a computer program named Statcheck informed him that a 2013 paper he had published on multiculturalism and prejudice appeared to contain a number of incorrect calculations – which the program had catalogued and then posted on the internet for anyone to see. The problems turned out to be minor – just a few rounding errors – but the experience left Kauff feeling rattled. “At first I was a bit frightened,” he said. “I felt a bit exposed.”

Kauff wasn’t alone. Statcheck had read some 50,000 published psychology papers and checked the maths behind every statistical result it encountered. In the space of 24 hours, virtually every academic active in the field in the past two decades had received an email from the program, informing them that their work had been reviewed. Nothing like this had ever been seen before: a massive, open, retroactive evaluation of scientific literature, conducted entirely by computer.

Fascinating read; the ethics of publicly calling out peoples’ errors is upsetting scientists.
link to this extract

This is a somewhat rambling post (unusually) in which this seems a key point:

The smartphone’s image sensor, in particular, is becoming a universal input, and a universal sensor. Talking about ‘cameras’ taking ‘photos’ misses the point here: the sensor can capture something that looks like the prints you got with a 35mm camera, but what else? Using a smartphone camera just to take and send photos is like printing out emails – you’re using a new tool to fit into old forms. In that light, simple toys like Snapchat’s lenses or stories are not so much fun little product features to copy as basic experiments in using the sensor and screen as a single unified input, and in creating quite new kinds of content. Meanwhile, the emergence of machine-learning-based image recognition means that the image sensor can act as input in a more fundamental way – translation is now an imaging use case, for example, and so is maths. Here it’s the phone that’s looking at the image, not the user. Lots more things will turn out to be ‘camera’ use cases that aren’t obvious today: computers have always been able to read text, but they could never read images before.

When this becomes continually true, what changes? When your phone knows what it’s seeing, what can it do?
link to this extract

Google is probably pretty pissed off. An alleged Russian spammer recently used a domain strikingly similar to Google.com to flood websites’ analytics with unwanted pro-Trump messages, and Google is now trying to wrest control of the URL.

But Vitaly Popov, the site’s owner, is not giving up without a fight, no matter how unlikely he is to win.

Late last month, Google filed a complaint with an arbitration forum over Vitaly’s ɢoogle.com domain. As you might notice, the “G” in ɢoogle.com looks a little off. That’s because Popov registered the website back in March 2016 with the Latin version of the letter, meaning he can produce a URL that looks very similar to Google.com, but that sends visitors elsewhere. Popov has done the same for the “K” in lifehacĸer.com.

“Google requests that the Panel issue a decision that the Domain Name registration be transferred to Google,” the company’s complaint, provided to Motherboard by Popov, reads. (A member of the arbitration forum, called ADR Forum, confirmed that there was an ongoing dispute between Google and Popov).

In its complaint, Google claims that Popov’s phony domain redirects visitors to a landing page with a slew of dodgy pop-ups, including one that asks for a Windows username and password.

Spam has moved on a bit.
link to this extract

It’s time to admit Apple Watch is a success • iMore

the narrative around Apple Watch was so lost that when Google delayed Android Wear 2, vendors like Motorola/Lenovo exited the market, and Pebble sold itself off, hot takes tripped over each other claiming the “smartwatch market” might be dead.

Fitbit, which makes a wide range of fitness-focused wearables, also didn’t face the same kind of pessimism from the tech community. Indeed, they were promoted as incredibly popular and far more flexible thanks to their greater diversity of styles and price-points. Yet their last quarter painted a very different picture.

Apple Watch, meanwhile, just had its best quarter ever. Which, when you combine Apple Watch Series 2’s improved hardware, Apple Watch Series 1’s lower cost of entry, and watchOS 3’s greater coherence, performance, and fitness focus, pretty much anyone could see coming. (Interest in Apple Watch purchases briefly peaked even higher than iPhone on iMore, based on Black Friday and holiday pageviews.)

It could be that there is no real “Smartwatch market”, just an Apple Watch market. Much like there’s no real “tablet market”, just an iPad market. Since it’s such a new product category and most of the existing products are still bound to phones, it could also simply be too soon to tell.

I don’t see Android Wear 2 making any difference to this dynamic, and I don’t see Fitbit’s attempts to escape into the smartwatch space being a huge success.
link to this extract

Web traffic from desktop computers plummets on weekends as people spend most of their time on mobile once they leave the office on Fridays, according to a Parse.ly study.

The ratio of mobile to desktop traffic stays somewhere near 1:1 throughout the week, but on weekends, the ratio changes dramatically — nearing closer to 2:1. Check out the grey dips in the chart below.

Parse.ly estimates that this change accelerated most from 2015-2016. Their findings also show that the mobile ratio tends to increase late at night, even supporting an 11:00 p.m. EST “reading activity peak” for mobile visitors.

Speaks to the importance of office PCs for use of sites like Facebook and online shopping.
link to this extract

when it comes to spotting and orienting bikes and bicyclists, performance drops significantly. Deep3DBox is among the best, yet it spots only 74% of bikes in the benchmarking test. And though it can orient over 88% of the cars in the test images, it scores just 59% for the bikes.

Košecká says commercial systems are delivering better results as developers gather massive proprietary datasets of road images with which to train their systems. And she says most demonstration vehicles augment their visual processing with laser-scanning (ie lidar) imagery and radar sensing, which help recognize bikes and their relative position even if they can’t help determine their orientation.

Further strides, meanwhile, are coming via high-definition maps such as Israel-based Mobileye’s Road Experience Management system. These maps offer computer vision algorithms a head start in identifying bikes, which stand out as anomalies from pre-recorded street views. Ford Motor says “highly detailed 3D maps” are at the core of the 70 self-driving test cars that it plans to have driving on roads this year.

How long before the first bicycle knockover?
link to this extract

The holiday quarter of 2016 capped off another positive year of smartphone growth despite concerns about the overall market slowing. According to preliminary data from the International Data Corporation (IDC) Worldwide Quarterly Mobile Phone Tracker, smartphone vendors shipped a total of 428.5m units during the fourth quarter of 2016 (4Q16), resulting in 6.9% growth when compared to the 400.7m units shipped in the final quarter of 2015. For the full year, the worldwide smartphone market saw a total of 1.47bn units shipped, marking the highest year of shipments on record, yet up only 2.3% from the 1.44bn units shipped in 2015. Large markets like China, the United States, and Brazil all ended the year on a strong note helping to keep worldwide volumes in positive territory.

“There’s no question that 2016 marked a memorable year for the smartphone industry in many ways,” said Ryan Reith, program vice president with IDC’s Worldwide Quarterly Mobile Device Trackers. “This was a year that brought us the first down year for iPhone, yet Apple closed out the holiday quarter by surpassing Samsung for the top spot in the smartphone industry. We also witnessed year-over-year declines in some emerging regions like the Middle East and Latin America where high growth was expected. To round it all off, we now have a three horse race at the top of the market as Huawei cracked the double-digit share mark for the first time ever.”

Apple beating Samsung is surprising – suggests that the Note 7 debacle really did hurt sales. Meanwhile, it’s Apple, Samsung, and then Huawei, OPPO and vivo – three Chinese makers taking 23% share. The “others” are being squeezed, down from 46% to 40%.
link to this extract

Jason Mackenzie yesterday announced that he is leaving the company after nearly 12 years. The executive did not give a reason for his departure, nor does he know where he’s heading next, as one tweet reveals. We’ve reached out to HTC to ask why he left the role and who the company plans to replace him with.

Good luck with getting an answer. I doubt HTC itself knows.
link to this extract

[Universal Music Group’s SVP of digital strategy and business development Jonathan Dworkin] hailed the potential impact of devices like Amazon Echo and Google Home, in the way they are powering new ways to access music. “Speakers and music go together like guns and drugs… It’s yet another swell that will help connect artists with fans, and drive consumers to migrate to legal services.”

He also talked about China being transformed into “one of the world’s leading music markets” thanks to local streaming services, and perhaps global players. “In the next ten years, China may well become the world’s largest recorded-music market,” he said, talking of the potential for a cultural knock-on effect that “rivals the 1960s in the west”.

Dworkin warned that “two of the industry’s top five accounts are operating with negative margins funded by other people’s money… we ned to find ways to ensure we have a balanced ecosystem of partners: platforms and pureplays… At Universal we are very mindful of the digital ecosystem’s fragility.”

He reiterated Universal’s support for both free and paid models in the streaming world. “The truth is, as these swells continue to propagate, we don’t know how far paid streaming will go,” he said, while arguing that it must offer features over and above free rivals to create value.

That “two of the top five.. on other peoples’ money” sounds like Spotify and Deezer to me.
link to this extract

In the United States, more people were employed in solar power last year than in generating electricity through coal, gas and oil energy combined. According to a new report from the U.S. Department of Energy, solar power employed 43% of the Electric Power Generation sector’s workforce in 2016, while fossil fuels combined accounted for just 22%. It’s a welcome statistic for those seeking to refute Donald Trump’s assertion that green energy projects are bad news for the American economy.

Just under 374,000 people were employed in solar energy, according to the report, while coal, gas and oil power generation combined had a workforce of slightly more than 187,000. The boom in the country’s solar workforce can be attributed to construction work associated with expanding generation capacity.

Damn facts. (Are the solar panels still in place on the White House? Shouldn’t there be a coal mine underneath it instead now?)
link to this extract