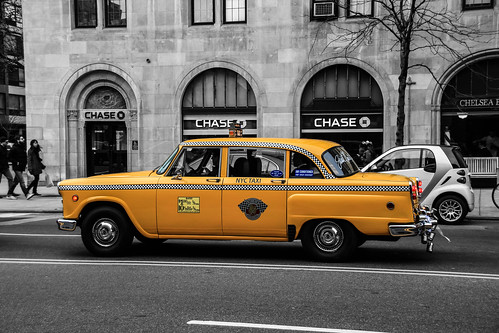 A New York taxi: its owner might be under financial duress, and it’s Uber’s and Lyft’s fault. Photo by tinfrey on Flickr.

In my younger days, I used to eat fast food all of the time. So cheap. So delicious. But these days, it’s all about moderation. My metabolism no longer supports the same amount of fried food. The hours I spend in front of a computer instead of moving probably don’t help either. In any case, I have to pay attention to the calories.

I was curious: How does the distribution of calories vary by fast food restaurant?

Here’s a chart that shows all the menu items for ten of the biggest national fast food chains. Each square represents an item, and each row represents a restaurant. Items farther to the right are higher in calories and items to the far left are probably a side of apple slices.

Go to the original for a much bigger version.
link to this extract

There’s a good reason your cab driver is so cranky: His livelihood might be teetering on the edge of default. According to a recent presentation prepared for Capital One Financial Corp. investors, some 81% of its $690m in loans for taxi medallions are at risk of default.

Medallions, the small metal shields affixed to the hoods of taxi cabs, are issued by the local taxi authority and effectively allow the cabs to operate legally. Owning one used to be akin to owning a gas-guzzling, money-printing machine. Medallions in New York City traded at more than $1m in 2014, but today’s prices are about half of that.

Now the share of taxi medallion loans Capital One thinks its borrowers won’t be able to repay in full has nearly tripled over the past year, to 51.5%. (Another 29% of loans are to stressed borrowers who could be in trouble soon.)

This resembles the mortgage collapse of 2007-8, though the reasons are somewhat different. But it will create huge problems: if taxi drivers go bust, Uber and Left clean up and prices rise without limit.
link to this extract

Networked digital video recorders have been harnessed for all sorts of ill intent over the past few months, including use in a botnet that disrupted large swaths of the Internet. But a different sort of malware hit the DVRs used by the District of Columbia’s closed-circuit television (CCTV) surveillance system just one week before Inauguration Day. The Washington Post reports that 70% of the DVR systems used by the surveillance network were infected with ransomware, rendering them inoperable for four days and crippling the city’s ability to monitor public spaces.

The CCTV system, operated by the District’s Metropolitan Police Department and supported by the DC Office of the Technology Officer (OCTO), began to be affected on January 12. Police noticed they could not access video from four DVRs. Washington DC Chief Technology Officer Archana Vemulapalli told the Post that two forms of malware were found on the four systems, and a system-wide sweep discovered additional DVR clusters that were infected.

The infections were limited to the local networks that the DVRs ran on, and this ransomware did not extend to the District’s internal networks.

(Gallagher’s report has more detail than the WaPo one, which is why I used it.) Surprised the White House press secretary hasn’t used this as an excuse for the tiny inauguration numbers yet.
link to this extract

A review of my new Samsung curved TV: I hate it so much • The Verge

Nilay Patel of The Verge bought a new Samsung curved-screen TV. His wife contributed this review:

Several years ago I asked Nilay for a new suitcase for Christmas, expecting a sturdy Samsonite or Tumi. You know, a suitcase. Instead, I received what he had deemed the “prettiest one.” It was subsequently destroyed both aesthetically and functionally after its very first journey in the hands of American Airlines.

That is the Samsung curved TV he brought home from Walmart. “I bought the prettiest one,” he said. Again. Those were the words uttered by my in-house technology expert, who quit his job as a lawyer for a new career writing technology reviews. A gamble which I fully supported at the time, and only question when he justifies a purchase by telling me “it was the prettiest.”

So, this Samsung television. (Ed. note: it is a Samsung UN40K6250AF.) The screen is curved, which means that it picks up and seemingly magnifies every glimmer of light in the room. Because that’s what you want in a television screen. The curved screen demands that you sit dead center of the TV unless you want to observe the equally frustrated facial expressions of the person sitting opposite you on the couch trying in vain to see through the glare. The glare is ridiculous. It’s so completely terrible that I give up after watching something for 30 seconds and walk away whisper-yelling swears at my sucker of a husband for bringing this piece of shit into my home. This television makes me hiss in anger.

Notice the focus on functionality rather than specs. This is effective reviewing.
link to this extract

Nexus 6 and 9 won’t be updated to Android 7.1.2 Nougat • AndroidAuthority

it’s not much of a surprise. Both products were released in November 2014, and Google’s own support page indicated that they were not guaranteed to get OS updates after October 2016. In fact, the company released Android 7.1.1 Nougat for the Nexus 9 in early December, followed by the Nexus 6 in early January, so it actually rolled out one more update than it originally was supposed to do for both devices.

If you are still using either one or both of these products, the good news is that Google will continue to offer security updates for the devices until at least October 2017. While you won’t be getting the latest and greatest Android version on the Nexus 6 or 9, both should continue to be secure to use for some time.

It’s maybe not much of a surprise in Android-land, but telling someone who bought a new iPad in November 2014 that it wasn’t going to get iOS 11 wouldn’t be a popular move. It’s the continuing puzzle: Apple makes its money on hardware, but does far better at software updates even than Google for Google’s own hardware.
link to this extract

Most reported declines in Snapchat Stories view counts ranging from 15 to 40 percent, and a reduction in how often they or those they monitor post to Snapchat Stories. Meanwhile, our sources report rapidly growing view counts on Instagram Stories, and engagement-to-follower rates one social influencer talent agent called “Insanely f*cking high”.

The success of Instagram Stories, the decline in Snapchat usage we’ve heard from a wide array of sources, and Facebook’s relentless drive to compete with the startup could spell trouble for Snapchat’s IPO on the NYSE market that’s expected in March. Snap Inc declined to comment for this story.

Could be a problem though: declining engagement is the kiss of death for social networks of any hue.
link to this extract

The drones of Isis • Defense One

A U.S. military official who recently returned from Iraq offered a bit more detail on the ISIS drones.

“Most of what they have is very primitive, bought from hobby shops, modified,” this official said. “They’re also shot down quite a bit. The Peshmerga and [Iraqi security forces] love shooting at those things.”

“The regional joke is the Iraqi forces are defending themselves as if they’re at a wedding,” said Peter Singer, an analyst with the New America Foundation. “You see them blasting AK-47s into the air like they do at weddings. That’s not optimal.”

U.S. officials are pursuing a few options for defeating improvised, weaponized drones. Defense One’s Patrick Tucker has reported on precision cameras, drones that detect drones, and “a directed-energy weapon that can disrupt a drone’s control link and GPS navigation at a distance of 400 meters.”

The U.S. military has also taken to flying EC-130H aircraft “jamming the radio signals used by insurgents to trigger bombs on the ground,” Vice News reported in November.

“The drone defender gun is not part of the regular kit,” he said. Soldiers are “going to face this potential threat across the world, in anything from battles to doing an embassy evacuation. And that’s not good. We should have seen this coming and developed a plan and equipment, not just for us, but for allied forces.”

Low-end disruption comes to the process of killing people. The many photos in the article are quite eye-opening.
link to this extract

It’s impossible to enumerate all of the applications we will see for mobile devices capable of performing sophisticated perceptual tasks involving vision, speech, or other sensory input. But they are likely to be found in every industry and have one or more of the following capabilities:

In health care, we envision a wide range of diagnostic applications, including some aimed at consumers. Imagine, for instance, a smartphone app that can diagnose skin conditions and insect bites by analyzing digital photos without transmitting the image data over a network.

We imagine mobile architecture and design applications that use computer vision to generate accurate 3D models of interior spaces quickly and easily.

An ever more powerful and resilient Internet of Things will include self-monitoring industrial equipment that uses machine learning to predict maintenance needs and self-diagnose failures.

Relevant because TensorFlow (Google’s preferred ML framework, which is being widely adopted) is beginning to be available to run independently on smartphone-level devices. AI on your phone, even without connectivity: it’s coming.
link to this extract

Having hatched its cloud-based Robin phone with a Kickstarter campaign, it’s time for hardware startup Nextbit to find its next nest. And it’s a move that may surprise you.

On Monday, gaming hardware maker Razer announced that it acquired all 30 members of the Nextbit team. Razer wowed this year’s CES with a gaming laptop fitted with three screens whereas the Robin was intentionally stripped-down; the two companies are hardly birds of a feather. Still, Razer’s deeper pockets will give Nextbit’s team, which includes veterans of Google and HTC, more resources to develop and distribute products.

“Joining up with Razer will allow us to reach much further,” said Nextbit cofounder Tom Moss. Moss will continue as Nextbit’s CEO under Razer CEO Min-Liang Tan.

While Nextbit will remain an independently operated unit that designs and develops products, don’t hold your breath for another round of Robin anytime soon. Although Razer plans to hang on to the Nextbit and Robin names, Moss said, another Robin phone isn’t on the radar for now. In fact, Nextbit has since stopped direct sales (it sold out of inventory through its website), though you can still buy the phone on Amazon.

And good luck getting any kind of support for it in the future.
link to this extract

December 2016: There must have been a lot of Fitbit trackers under the Christmas tree • Recode

Fitbit may have reason for some holiday cheer.

Its app rose to be No. 1 among free apps on Apple’s iOS app store on [Christmas day] Sunday, suggesting a lot of the company’s fitness trackers were unwrapped on Christmas morning.

Amazon’s Echo also appears to have been popular, with its Alexa app coming in at No. 4.

The other top spots were filled by apps not associated with Christmas presents, such as Snapchat, Super Mario Run and YouTube.

Given that Fitbit just warned of a terrible quarter, with soft sales in Asia and the US, one can determine that position on the App Store on Christmas day is not necessarily an indicator of, well, anything useful.
link to this extract