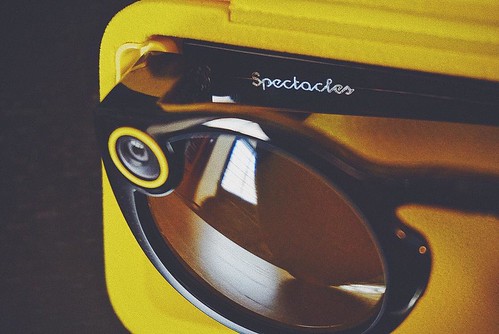 Snap’s Spectacles: you can get them if you want them (and have a ticket to New York). Photo by izqrdo on Flickr.

A selection of 12 links for you. However, it’s Friday. I’m @charlesarthur on Twitter. Observations and links welcome.

Trump signs ‘no privacy for non-Americans’ order – what does that mean for rest of us? • The Register

US President Donald Trump may have undermined a critical data sharing agreement between the United States and Europe that internet giants rely on to do business overseas.

In an executive order focused on illegal immigrants that was signed by the president this week, one section specifically noted that privacy protections would not be extended past US citizens or permanent residents in America.

Agencies shall, to the extent consistent with applicable law, ensure that their privacy policies exclude persons who are not United States citizens or lawful permanent residents from the protections of the Privacy Act regarding personally identifiable information.

That language appears to directly contradict a critical component of the new Privacy Shield agreement between the US and Europe that provides essential legal protections for US businesses sending and receiving data across the Atlantic. In short, the agreement is supposed to ensure non-Americans are not treated as second-class citizens by US organizations, with weaker privacy safeguards than Americans are afforded.

Our goal is to store climate change data redundantly in many locations around the world. To see our current mirrors, visit climate.daknob.net. We also have several torrents that you can use to both retrieve data and assist in maintaining them.

Resistance takes many forms.
link to this extract

Google is planning to bring artificial intelligence and machine learning tools to the Raspberry Pi.

The low-cost credit-card sized computer is widely used by schools and the maker community for programming devices.

Google has asked makers to complete a survey about what smart tools would be “most helpful”.
And it suggests tools to aid face and emotion recognition, speech-to-text translation, natural language processing and sentiment analysis.

Google has previously developed a range of tools for machine learning, internet of things devices, wearables, robotics and home automation.

“Google is going to arrive in style in 2017. The tech titan has exciting plans for the maker community,” said the foundation in its blog.

This is going to be fascinating, as cheap hardware (processor and sensors) gets powerful software. Where can you deploy them? All over.
link to this extract

Google is not new to hardware but in the fourth quarter it launched a major line-up of devices including the Pixel phone and Google Home, the home speaker. Evercore analyst Ken Sena expects $808m in Google-branded hardware revenue in the quarter, with Pixel and Home contributing roughly half of the revenue. Evercore estimates Google sold 552,000 Pixel phones and 500,000 Google Homes. Google likely won’t share sales figures for its hardware business, but may give some hints on how well they are doing.

Alphabet missed estimates – $26.1bn, $6.6bn operating income. As ever, Google search and ads is the biggest part of that. “Other” within Google rose by 62%, up by $1.3bn. So that figure is probably close.

The answer to what decides when a Bet becomes a Thing or just Cashes In Its Chips And Goes Quietly Away still isn’t clear.

You can probably bump up the hardware estimates by 5-10% based on that beat of estimates.
link to this extract

I mentioned yesterday that we previously heard Google Pixel would bring ‘waterproofing,’ a feature we’re now told is “still on the table.”

We’re also now being told, however, that Google is once again focusing intensely on the camera with Pixel 2, that the device is currently being tested with improved chipsets from two different manufacturers, and that it will bring a higher price. Finally, the same source says Google has lately been testing lower-end Pixel devices which would bring lesser specs and a much lower price tag.

As for waterproofing, this is a slight change in tone today from this same source that before told us the feature would “definitely” be coming with the next Pixel. Now we’re told that the feature is “still on the table,” which would suggest a less firm position from Google on the feature.

Also have developed its own chipset. Perhaps more important. But raising the price? They can’t assume that Samsung will screw up the Note 8; 2016’s demand was unusual.
link to this extract

It seems like Silicon Valley hiring season right now, as swiftly on the heels of Hugo Barra announcing his move to direct Facebook VR, it’s emerged that Google has recruited a senior new designer for its Daydream VR mobile platform. Claude Zellweger, who most recently led HTC’s Vive design team and played a major role in developing HTC’s smartphone design language, made the news public in a tweet:

@vladsavov I am joining Google Daydream, so you can redirect your criticism:).

HTC. How does it continue?
link to this extract

Despite long lines to get a pair of Snap’s Spectacles near the end of 2016, enthusiasm for the product appears to have cooled, at least at the company’s New York store.

In November, people waited outside the store for up to 18 hours to be the first to purchase the combination glasses and video recorder. However, a midday visit to Snap’s physical store on Thursday revealed there was no one in line to get the product.

I’ll wait for a secondhand pair, if I ever figure out Snapchat.
link to this extract

According to hacker and Twitter user @WauchulaGhost, Trump’s account is  set to email password reset requests to a personal Gmail account (it appears to be that of Dan Scavino, his social media chief), and it reveals the first two letters of the account (enough to surmise it’s probably Scavino’s). This signals to hackers that all they need to do to illicitly broadcast to the president’s 14 million online followers is get into said Gmail account, which may or may not be secured with some form of two-factor authentication. Even with such an extra layer of authentication, knowing the private email address of a senior White House employee would make them a target for spearphishing attacks like those that befell the DNC and John Podesta last summer.

Even with two-factor authentication, which can be spoofed too (if you know it’s in place).
link to this extract

Disable your antivirus software (except Microsoft’s) • Eyes Above The Waves

(Perhaps it should go without saying – but you also need to your OS to be up-to-date. If you’re on Windows 7 or, God forbid, Windows XP, third party AV software might make you slightly less doomed.)

At best, there is negligible evidence that major non-MS AV products give a net improvement in security. More likely, they hurt security significantly; for example, see bugs in AV products listed in Google’s Project Zero. These bugs indicate that not only do these products open many attack vectors, but in general their developers do not follow standard security practices. (Microsoft, on the other hand, is generally competent.)

Furthermore, as Justin Schuh pointed out in that Twitter thread, AV products poison the software ecosystem because their invasive and poorly-implemented code makes it difficult for browser vendors and other developers to improve their own security. For example, back when we first made sure ASLR was working for Firefox on Windows, many AV vendors broke it by injecting their own ASLR-disabled DLLs into our processes. Several times AV software blocked Firefox updates, making it impossible for users to receive important security fixes. Major amounts of developer time are soaked up dealing with AV-induced breakage, time that could be spent making actual improvements in security (recent-ish example)…

…What’s really insidious is that it’s hard for software vendors to speak out about these problems because they need cooperation from the AV vendors (except for Google, lately, maybe). Users have been fooled into associating AV vendors with security and you don’t want AV vendors bad-mouthing your product. AV software is broadly installed and when it breaks your product, you need the cooperation of AV vendors to fix it.

The risky business of Trump the twittering president • TechCrunch

Natasha Lomas looks into the various risks associated with someone who is president who tweets without constraint:

The attorney predicts Trump’s unvarnished and unvetted tweet style will lead to him being sued for defamation.

“The best example of [his personal attacks via Twitter] is when women were coming forward during the presidential campaign and claiming that he had sexually assaulted them,” he continues. “Trump got triggered and made the types of comments that he’s prone to making, and called them liars and all of these things. And just recently… one of the [women] filed a defamation suit against him for that.”

“That’s a big problem if you’ve got a sitting president who is acting in a way that they’re exposing themselves to lawsuits. Because being the president’s an important job. And that’s what you should be focused on. Having to defend against lawsuits is an incredible distraction.”

“We all saw what happened with former President Clinton. In the end it became such a sideshow and ended up derailing years of his presidency,” he adds.

Here’s hoping.
link to this extract

Luckily, bots’ conquest of knowledge is not yet complete • FT

robo-pricing bots can monitor each other’s decisions far faster than humans can know and react. Online sellers are increasingly able to overcome Hayek’s objection that it is not possible to know the details of supply and demand conditions. “Big data” is in this sense the opposite of “statistics”; it retains all the detail. Individuals know about their own preferences; the bots know about millions of people’s preferences.

If one, or a few, bots used this wealth of information to achieve the most efficient use of resources in society, it would mark an improvement in economic welfare. The catch comes with the distribution of those efficiency gains; the superior information held by the algorithms enables them to capture the additional social surplus.

In the early days of online shopping, the expectation was that greater competition would increase transparency — through easy comparison — and therefore reduce consumer prices. However, pricing bots’ speed gives them the advantage. Economists have looked for evidence of increasing online price discrimination — getting the maximum possible out of each consumer — and not found it; but it is not obvious that the data to test this are readily available. With such targeting standard in some markets (such as airline tickets), it would be surprising if the practice were not spreading.

This is more than a headache for competition regulators. It is a Hayekian challenge to the economic system.

The relief – so far, she points out – is that bots don’t quite understand everything, and knowledge has to be constantly acquired, renewed and discarded once outdated.
link to this extract

Mr. Barra, a former executive at Alphabet Inc.’s Google, left Chinese smartphone maker Xiaomi Corp. this week. His title at Facebook will be vice president of virtual reality, Oculus said in a post on Twitter.

“Hugo shares my belief that virtual and augmented reality will be the next major computing platform,” Mr. Zuckerberg said in a Facebook post. “They’ll enable us to experience completely new things and be more creative than ever before.”

I think it’s so telling that Zuckerberg doesn’t spend his own time on Facebook, which was itself meant to let us “experience completely new things” and “be more creative than ever before”. I’m not sure I feel that optimistic about Oculus.

Still, at least Barra’s health should improve in the over-regulated clean air of Menlo Park.