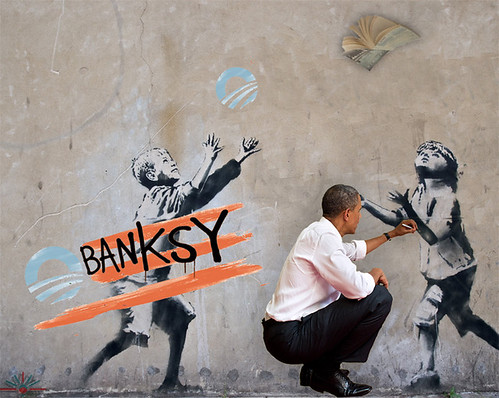 Find out for yourself if you know how well and badly the US fared under Obama. Picture by AK Rockefeller on Flickr.

A selection of 10 links for you. Not to be read out for “entertainment” at inaugurations. I’m @charlesarthur on Twitter. Observations and links welcome.

Worldwide net revenue from all apps (including games) across the App Store and Google Play grew 67% over Q4 2015, from approximately $5.2bn to approximately $8.7bn. As illustrated by the chart below, this reflected growth of 60% worldwide for Apple’s App Store, from $3.4bn to $5.4bn year-over-year, and 82% growth for Google Play, which saw revenue paid to developers increase from $1.8bn to $3.3bn for the same period. 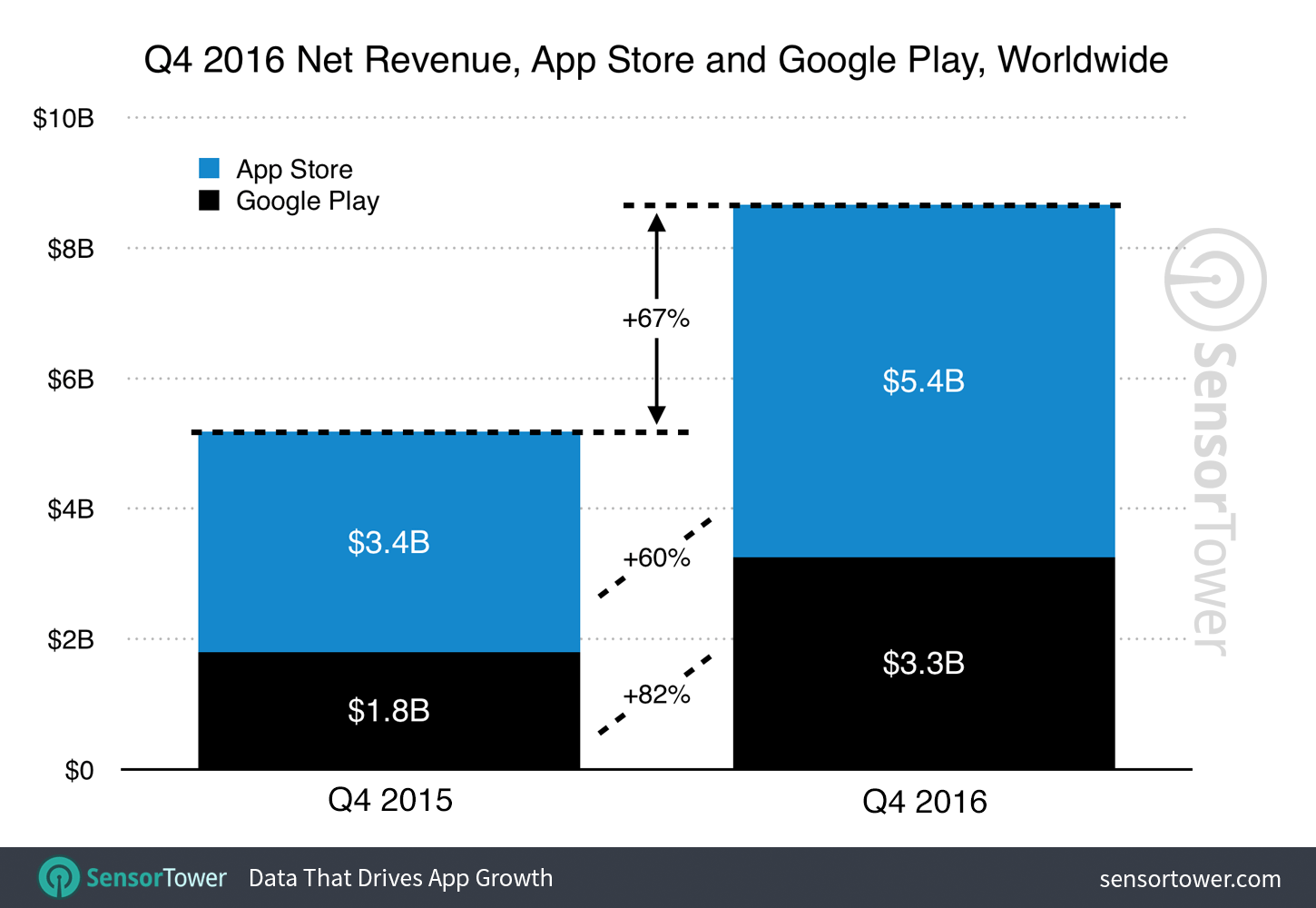 Looking at new installs of apps from both stores, downloads of all apps worldwide during Q4 2016 totaled approximately 19.2bn and there were more than 80bn app downloads during 2016 in total.

It’s not clear whether the data includes ad revenue. From what is shown, you can see iOS App Store revenue growing slower than the market, but still by more in absolute terms than Google Play’s. We constantly hear that Google Play will catch up and pass iOS revenues; on this showing, that will happen in 2020.

What’s more likely to happen first is that app revenue growth slows down dramatically.
link to this extract

The AR [augmented reality] functionality [of the Asus Zenfone AR] was shown live on stage at CES by Google’s Johnny Lee, who heads up the Tango team. Google has shown a Hot Wheels app (onstage) and Jenga (shown previously) as realistic digital representations of otherwise classic gaming experiences inserted believably into your environment. A GAP app shown at CES, however, hinted at AR technology’s enormous potential to save folks time. It overlaid clothes of varying sizes seamlessly onto a floating model in the living room, with each outfit draping realistically over different body types.

And as countless CES attendees navigated the endless casino hallways, so many of us could have saved time if we’d been given step-by-step directions. All it would take are little dots overlaid on the carpet ahead shown on the phone’s screen — something that has been shown with Google Tango in the past.

God forbid you should look up from your phone screen or, you know, ask somebody or read a map. What about a strap for each wrist which gives a mild electric shock to tell you which way to turn?
link to this extract

This “Genderless Nipples” account is throwing off Instagram’s algorithm • PAPERMAG

Genderless Nipples posts up-close pictures of people’s nipples, making it unclear if they belong to men and women. This clever strategy completely bamboozles Instagram’s algorithm for n00dz detection so sometimes when it deletes pictures off Genderless Nippples’ account it ends up deleting pictures of a dude’s nipples.

This happened within a few days of the account going live–Instagram in all its wisdom deleted a picture of nipples thinking they were lady parts when in fact they belonged to a guy. The account holders responded by posting the notification they received and a caption pointing out the clear double standard that exists: “Instagram, you can’t even tell the difference between male and female nipples; who could!? So why even bother banning female nipples if they can be so similar?”

Instagram’s current policy about nudity is clear for the most part: no butts, no genitalia. When it comes to nipples, though, the policy changes based on gender–if a woman’s nipples are exposed, it’s nudity. Male nipples are always permissible.

Revealed last Friday, the document outlines six layers of security and reveals some interesting factoids about the Alphabet subsidiary’s operations, none more so than the disclosure that: “We also design custom chips, including a hardware security chip that is currently being deployed on both servers and peripherals. These chips allow us to securely identify and authenticate legitimate Google devices at the hardware level.”

That silicon works alongside cryptographic signatures employed “over low-level components like the BIOS, bootloader, kernel, and base operating system image.”

“These signatures can be validated during each boot or update,” the document says, adding that “the components are all Google-controlled, built, and hardened. With each new generation of hardware we strive to continually improve security: for example, depending on the generation of server design, we root the trust of the boot chain in either a lockable firmware chip, a microcontroller running Google-written security code, or the above mentioned Google-designed security chip.”

This is in Google’s Infrastructure Security Design Overview. Google is paranoid about people penetrating its security because it relies on peoples’ trust; without that it would be Yahoo.
link to this extract

Although Motorola still was among the top five U.S. phone brands with Lenovo acquired it, it was posting losses and lagged behind market leaders such as Apple and Samsung.

Many analysts thought the marriage could work, given Lenovo’s experience. The IBM success, in particular, created “a certain aura of invincibility,” says Neil Mawston, an analyst at market-research firm Strategy Analytics.

Mr. Yang initially instructed Lenovo executives to take a hands-off approach, similar to his strategy with IBM. He vowed to make Motorola profitable within six quarters and reassured Motorola employees he didn’t plan to cut U.S. positions and move them to China.

He also insisted Motorola re-enter China, a country it left after being acquired by Google, whose search and email functions have largely been blocked in China following disagreements with Beijing over censorship.

“Lenovo is a global citizen like you,” Motorola employees recall Mr. Yang telling them in U.S. town-hall meetings after the deal closed. “You have to sell things globally.”

Lenovo already had a huge phone business in China, briefly reaching No. 1 in sales in 2014.

The piece, though long, is oddly unfocussed. What’s the principal cause of Lenovo’s failure? Motorola being unprofitable (which it was even before Google), or Lenovo being arrogant? One suspects that Motorola’s culture, plus the extreme competitiveness of the mobile market, is the true reason.
link to this extract

Tower of Babel • Remains of the Day

Our next POTUS, whether wittingly or not, weaponized Russell Conjugation [the way we see desirable traits in ourselves as undesirable in enemies – eg I’m firm, you’re obstinate and he’s pigheaded] and our coalitional instincts [explained earlier in his post] and performed a jiu-jitsu toss on his opponents, leaving much of the country wondering whether winner-take-all elections for the Presidency are a good thing in a country so evenly divided…

…It’s somewhat of a miracle how every Tweet of his sifts the same factions apart; one side screams in disgust and disbelief, the other piles on with glee. Let’s call that technique of tweeting the Trump Conjugation. Sad!

Many claim the internet creates filter bubbles, but I believe the mechanism by which the Internet amplifies tribalism doesn’t work the way most people describe it. The common explanation is that we form networks with like-minded people and only hear the opinions of those who agree with us, reinforcing our narrow world views.

My belief is that the Internet has increased our exposure to diverse viewpoints, including those from oppositional tribes. I suspect everyone who uses the Internet regularly encounters more diverse opinions, in absolute terms, than prior to the rise of the Internet, and there is research (PDF) to support this. Our information diet is more diverse now, and as opposed to the age before social media or even the Internet itself, we’re exposed to more opinions that both strongly confirm AND counter our beliefs.

Wei doesn’t write often, but when he does it’s worthwhile.
link to this extract

The Big List of Naughty Strings is a list of strings which have a high probability of causing issues when used as user-input data.

In case you’ve got something you built that needs testing. Sure that Little Timmy Drop Tables is in there somewhere. He’s already got a company in the UK.
link to this extract

I’m Craig Silverman and this is the first version of a restarted newsletter about online rumors, fake news, and misinformation.

If you’re wondering why you’re receiving it, here’s a bit of background: You signed up to receive the newsletter from Emergent.info, my rumor-tracking website. It’s been dormant since March 2015. That’s also the last time I sent this newsletter.

I’m now covering fake news and online misinformation as the media editor for BuzzFeed News. This newsletter will be a quick digital briefing on those topics.

You can subscribe here. If you need more email.
link to this extract

You Draw It: What Got Better or Worse During Obama’s Presidency • The New York Times

You Draw It: What Got Better or Worse During Obama’s Presidency

Draw your guesses on the charts below to see if you’re as smart as you think you are.

This is terrific: unemployment, convicted immigrants deported, national spending on health care, national debt, number of Mexicans illegally in the US, number of violent crimes, troops in Afghanistan and Iraq – all there, but you have to try to guess (or use your gigantic knowledge) first.

More to the point, this is a terrific use of data journalism to get people at least to see how their beliefs match up to reality. (Trouble is, will they accept that it is reality?) Very like the FT’s interactive with data from the US and UK last December.
link to this extract

The lawsuit alleged that Lily did not have a single prototype that functioned as advertised at the time of the launch video’s filming. Instead, it claimed Balaresque and Bradlow brought non-functioning models to the shoot for “beauty shots,” while the first-person angles that supposedly came from the Lily Camera were actually shot by GoPro units that had been strapped to the robot.

In an email cited by the lawsuit, Lily CEO Balaresque wrote to Brad Kremer, a video producer who specialized in snowboarding shoots, that shots from the Lily Drone will be using a “Gopro mounted to a Lily prototype.”

“However, we do not feel comfortable telling people that we shot [view from Lily] scenes with a Gopro (because the whole thesis of our product is that you do not need a Gopro),” he continued. “Can you modify a Gopro image in post-processing so that people cannot tell that it was taken from a Gopro…”

The use case that the Lily founders thought they had – include yourself in those family holiday photos! – is pretty much completely answered by the selfie stick. Though I can see scores of professional uses for drones (films, TV, reconnaissance) I still can’t see a viable use for consumers at the moment.
link to this extract

Errata, corrigenda and ai no corrida: apparently every iPad mini owner in the entire world spends all their time using it in portrait mode and would love to buy a 10.5in version so they can have two side-by-side. We regret the error.