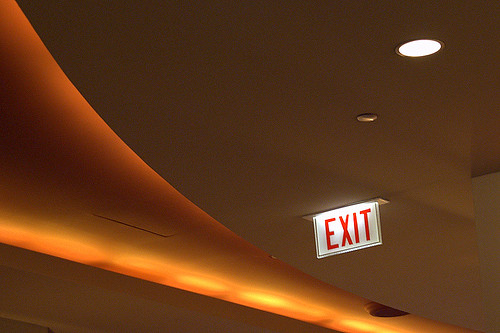 Exit. Who’s next? Photo by Today is a good day on Flickr.

There comes a time in every former top-ranking sports player’s career when they have to accept reality: they’re not up to it any more. They keep getting beaten by people whom they once would have trampled; what should have been easy wins are now struggles, or upsets. Eventually, they accept the reality everyone else has already seen: it’s time to exit.

And now we’re seeing that happen in the smartphone market. This isn’t really about sales of iPhones being down year-on-year – though they are, for the second quarter in a row, and though in the previous quarter Apple managed to keep its handset ASP (average selling price – calculated by total handset revenue divided by the number of handsets) up, in this quarter it was substantially down, below $600 for the first time since 2Q 2014.

But more generally, this is the quarter where China really began to muscle into the top ranks of Android OEMs – and all the players who used to be the big names there are inching towards the exit. The problem for the big-name Android OEMs is that, because it’s Android, they’re replaceable. Android on one handset is quite a lot like Android on another. But an Apple device, and its integrated software, is sui generis.

So here are the numbers showing how that replacement is going. The list below is all in diminishing size of handset shipment volume. Other data sometimes has to be estimated, and in the case of Huawei, OPPO and vivo you’d have to be in one of the big analyst camps to know what their ASPs and hence revenues are, and you might have to be at the companies to know whether they’re profitable.

Standout elements from the quarter: Sony made a profit! (Even as it dwindled.) Lenovo kept shrinking; Apple’s ASP fell; Samsung trundled on; LG made more losses (the G5 flagship essentially sank); Microsoft barely turned up.

Apple: operating profit calculated at the historic figure of 27.9% (derived from multiple financial analysts). Might have been lower or higher – the 6S range maybe costs more to make than the 6 range, but there’s the SE range which might be cheaper because less retooling needed.

How do I calculate the revenue figures (and hence ASPs) for OPPO, vivo, Xiaomi? According to According to Strategy Analytics,

Global Smartphone Industry revenues declined by -5% YoY in Q2 2016, due to softening of volumes. Apple was followed by Samsung, Huawei, Oppo and vivo from a revenue perspective. The report also captures the Wholesale Average Selling ASP’s for all major vendors across six regions. ASP’s in the quarter declined by -6% globally.

So if Oppo and vivo were bigger than Sony, they must have done more than 3.64bn. (Xiaomi must have been less than them too.) I’m guessing they weren’t that much bigger. For Huawei, which like those two doesn’t release revenue figures, I’ve estimated an ASP (up from the previous quarter) and generated the revenue figure from that.

LG: assume tablet sales were minimal, and had zero profit.

HTC: given that it now sells the Vive headset too, though not in large numbers (certainly not millions), it only takes a small adjustment from the overall revenue.

Microsoft Mobile: Microsoft gave figures for featurephone sales, of 9m; assuming an ASP of $15 for those and gross margin of $5 each (as before) gives the featurephone revenue. Assume the same manufacture cost as before, and you get zero gross margin; even with zero sales/marketing and R+D, you get a negative margin.

Everyone’s seeing price declines, which is what you’d expect in a growing market where you also have Moore’s Law and scale coming into play. But this is barely a growth market. Smartphone shipments were up just 0.26% year-on-year. When you look at the trend over the past nine years, we’ve really hit a wall here:

The red line shows the four-quarter moving average, and that’s clearly down. What that suggestion of slowdown doesn’t quite tell is how the market is diverging. The premium end was long ago saturated: people who could buy expensive phones did so, but now there’s no new market to sell into in the developed countries – and consequently the US, China and western Europe are expected to see slowdowns, and even reductions in volume, this year (per IDC). The action, such as it is, will be in emerging markets such as the Middle East, Africa and Latin America – though even they will only see growth of about 5.6%.

In such a world, the companies which initially made Android a Huge Thing are beginning to head for the exit. HTC built the first Android phone. Sony had to go Android (as Sony Ericsson) because it was losing money hand over fist. LG had to figure out how to make smartphones quickly, because its featurephone business was being destroyed.

Now though they’re seeing those be destroyed all over again. You can see the numbers above. And here’s a graph of how pretty much everyone is seeing sales growth compared to the smartphone market turn negative (so if the market grows 10% and they grow 5%, they’re falling behind):

But I’ve been collecting the revenue and profit/loss numbers too (and publishing them) going back to Q4 2014. That’s seven quarters. What if you add that up?

Here’s the lineup when you calculate it over seven quarters:

This bears out a truth that is borne out again and again by analyst reports into best-selling handsets, brand loyalty, and customer satisfaction: these days it’s a two-horse race, Apple and Samsung.

Xiaomi is an unknown, financially. But all the rest are losing money hand over fist, and as Vlad Savov wrote in a terrific piece entitled “Android OEM death watch: Sony, HTC and LG edition“, you do wonder why they soldier on:

The Android ecosystem has never been more diverse than it is today, but I suspect that what we’re witnessing now is a peak from which the basic economics of a maturing smartphone market will rapidly drag us down. Niche players like Nextbit, Vertu, and BlackBerry might survive thanks to their low volume of sales and correspondingly limited costs. But the big names we’ve known for so long, the Sonys and HTCs of this world, seem fated to fade from view.

I think this is absolutely right. Look at those numbers: why is LG putting up with a division that has lost money, and shows no sign of stopping? Although Sony made money this quarter, it’s fading from view. Lenovo’s ASP is so woefully low that it’s an obvious target for every up-and-coming Chinese OEM. (I was recently contacted by Meizu, which is launching into the Asian market: yet another rival for the uncommitted phone buyer.)

It isn’t even as if these struggling companies have scale: Sony has only sold 12% as many phones as Apple over the period (and 8.6% as many as Samsung, which might be the better comparison); LG has managed a more respectable 18.5% of Samsung’s number, but it’s losing money on them, over seven quarters.

Sure these companies have a lot invested in this business; you can’t just shut down a smartphone business like closing a corner shop. There are contracts, staff, distribution deals. But you can edge out, which is what Sony seems to be doing as its range and distribution shrinks. Will LG follow, or is its rivalry with Samsung in Korea just too strong to let it ever let go?

I’m honestly puzzled by companies which tot up millions in red ink and decide it’s fine to carry on. Microsoft is clearly getting out (who wouldn’t, looking at those margins) but how can Sony or Lenovo look at their returns and feel they’re OK? That’s the puzzle here.

Sure, there’s lots else going on: Apple’s falling ASPs and falling sales point to the saturation of the markets. Equally, the cheap hardware is getting really good – the Shenzhen effect, as volume of production means that the only distinguishing thing is software and, to a lesser extent, chip design ability. (Apple, Samsung and Huawei stand alone here.) I’m certainly impressed by Huawei, which offered a dual-lens camera on the new P9 which has a neat refocus/re-aperture effect, well ahead of Apple.

(Huawei’s problem is it doesn’t have a coherent strategy: it offered “3D Touch” before Apple too – as did ZTE – but hasn’t followed through; only the latest P9 still has it. Will the dual lens offering spread to the rest of its offerings, or fall by the wayside as happened with HTC’s dual system on the M8 in 2014?)

In search of the lost profits

What then happened to all the profits that HTC, Lenovo, and Sony used to earn? Simple: eaten by Samsung, Apple, and Chinese rivals. The growth of companies like OnePlus, Meizu, and of course Huawei, vivo and OPPO and (less so) Xiaomi means the potential for scale falls away from those already in the market.

However it can take a while for these effects to become visible. HTC’s sales peaked in 2011; LG’s, Sony’s and Microsoft’s in the second half of 2014. From around that time, all the Chinese OEMs began growing rapidly, first in their home market, and then India; and in Huawei’s case, Africa, Europe and the US.

Apple looks to have peaked in 2015 – but it has a solid ecosystem and so many users that any erosion would take a long, long time. That’s in stark contrast to every Android OEM, which (as even Xiaomi is finding out) is disposable and replaceable.

But it can take a long time. BlackBerry’s handset sales peaked in 2010, and yet it’s still going. (Though will John Chen finally announce the company is getting out of hardware at the quarterly results on September 28? One to watch.) HTC has been ebbing for a while, for example. Sony has begun withdrawing to Asia. LG is being pushed aside in Europe by Huawei.

The only question is when some of the executives at these companies will finally ask why they’re still trying to play a losing hand. There comes a time for the players to leave the game. When is it?

1 thought on “The 2Q 2016 smartphone scorecard: players searching for an exit”