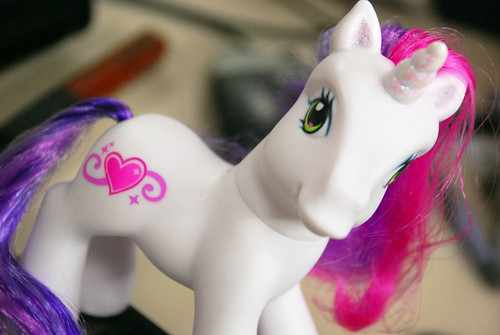 Looks harmless, but one of these bit Apple hard in the butt this week. Photo by Lisa Brewster on Flickr.

You can now sign up to receive each day’s Start Up post by email. You’ll need to click a confirmation link. Then it’ll arrive next week.

A selection of 12 links for you. Freshly fried. I’m charlesarthur on Twitter. Observations and links welcome.

Pandora signs its Warner Music deal, which means it can finally launch its $5 subscription service – Recode

For instance: This morning, at 8 am ET, Pandora announced that it “launched Pandora Plus,” its new $5-a-month subscription service.

But Pandora didn’t actually launch Pandora Plus, because it couldn’t launch the service legally: It had yet to sign a licensing deal with Warner Music Group.

Now Pandora has signed its Warner deal, so it can go ahead and start letting some of its users try out Pandora Plus — a souped-up, ad-free version of its ad-supported free web radio service.

Pandora has already said that only 1% of its user base would see the new service today anyway, so it was nearly impossible for anyone to figure out if it was live or not.

But Warners used Pandora’s desperation to screw better terms out of it. A bit like Universal screwing Microsoft in 2006 when the latter was desperate to launch the Zune.

Still, brings Pandora into the streaming game in the US.
link to this extract

A woman who emailed The Verge this afternoon says her eight-year-old daughter, while trying to send a message to her dad, was presented with “a very explicit image” of “a woman giving oral sex to a well endowed male.” Her daughter hadn’t searched for anything explicit, just the word “huge.”

Haven’t tried this. Apple blocked the MLP thing, but it seems like the flaw lies in Microsoft’s Bing (which supplies the search results on GIFs) not having figured out that GIFs might sometimes not be child-friendly.

»Thursday’s ruling by the Court of Justice of the European Union (CJEU) will be music to the ears of rights holders who are frustrated at the existence of sites that provides lists of links to pirated music and films but that do not host such material themselves.

It could also have major implications for search engines such as Google GOOG 1.26% if they link to copyright-infringing services despite having been asked not to do so.

This particular case involved a website called GeenStijl (“No Style”) that repeatedly posted links to Playboy pictures of a Dutch TV presenter called Britt Dekker, even after Playboy’s Dutch publisher at the time told it to stop.

The ruling marks a rare occasion on which the court went against the advice of its advocate general, the court’s top advisor. (Another example would be the infamous Google Spain ruling that extended the so-called “right to be forgotten” to search engines.)

Advocate-general Melchior Wathelet recommended back in April that it should be irrelevant whether or not a site posting links to copyright-infringing material is doing so deliberately.

Really perplexing. Here’s the ruling, and the press release.
link to this extract

iPhone 7: for the first time, the Plus model is the most pre-ordered – Slice Intelligence

Pinch of salt, but if correct will bump up the average selling price of iPhones.
link to this extract

»Samsung already has been pursuing a global recall effort of its own, after reports surfaced of overheating and exploding batteries in its new top-of-the-line phone.

But the company’s recall effort has been plagued by problems, including conflicting consumer information and communications troubles with regulators.

The formal recall in the U.S. is likely to specify ways of remedying the overheating and explosion problems that have surfaced in the phone.

Bang goes a ton of brand equity.
link to this extract

»This paper is a short summary of a real world mirroring attack on the Apple iPhone 5c passcode retry counter under iOS 9. This was achieved by desoldering the NAND Flash chip of a sample phone in order to physically access its connection to the SoC and partially reverse engineering its proprietary bus protocol. The process does not require any expensive and sophisticated equipment. All needed parts are low cost and were obtained from local electronics distributors. By using the described and successful hardware mirroring process it was possible to bypass the limit on passcode retry attempts. This is the first public demonstration of the working prototype and the real hardware mirroring process for iPhone 5c.

Skorobogatov works at the Cambridge University computer science lab. This isn’t trivial.
link to this extract

»Business leaders of PC vendors face a stark choice and must decide between overhauling their businesses or leaving the PC market by 2020, according to [research company] Gartner. If they decide to stay, they need to rapidly determine what changes to make or what alternatives to adapt in today’s over-penetrated PC market.

“The PC business model as we have traditionally known it is broken. The top five mobile PC vendors have gained 11% market share over the past five years — from 65% in 2011 to 76% in the first half of 2016; but this has come at the expense of profitable revenue,” said Tracy Tsai, research vice president at Gartner. “While this does not mean that the PC market is finished, the installed base of PCs will continue to decline over the next five years, with a continuing erosion of PC vendors’ revenue and profit.

“The traditional way of gaining shipment market share by competing on price to stimulate demand simply won’t work for the PC market over the next five years,” said Ms. Tsai. “Today’s PC vendors need to adjust to the new realities that are shaping consumption, including the fact that PC users are extending PC lifetimes until end of life, business PC applications and storage are moving into the cloud, and are less reliant on PC performance and, crucially, that price and specification are not enough for a user to upgrade a PC — a new and better customer experience is the only true differentiation.”

Intel and Microsoft are looking elsewhere, Gartner says, but the PC companies don’t seem to have caught the hint. Moreover, it says the installed base of PCs is shrinking: from 1.48bn in 2015 to 1.44 this year, and 1.33bn in 2019. Fewer PCs means fewer replacements means fewer sales means less profit.

That 2020 timescale is pretty short.
link to this extract

»If Android OEMs were just that, original equipment manufacturers, their jobs would be much simpler and easier. But in the modern smartphone world, it’s not enough to just design and build new gadgets to a high spec; you have to power them with your own tailored software, you have to support them with updates and security patches, and you have to price them enticingly, too. Not everyone has been doing a particularly good job of this, and as the ranks of Android OEMs continue to swell, escalating competition might push some familiar names out of the game altogether.

This is a great piece; I’ve been compiling my Q2 2016 smartphone scorecard – who’s making money, who’s not – and Savov hits the mark. These companies are in trouble.
link to this extract

The free-time paradox in America • The Atlantic

»60 years later, it seems more true to say that it is not leisure that defines the lives of so many rich Americans. It is work.

Elite men in the US are the world’s chief workaholics. They work longer hours than poorer men in the US and rich men in other advanced countries. In the last generation, they have reduced their leisure time by more than any other demographic. As the economist Robert Frank wrote, “building wealth to them is a creative process, and the closest thing they have to fun.”

Here is the conundrum: Writers and economists from half a century ago and longer anticipated that the future would buy more leisure time for wealthy workers in America. Instead, it just bought them more work. Meanwhile, overall leisure has increased, but it’s the less-skilled poor who are soaking up all the free time, even though they would have the most to gain from working. Why?

I like the third one best.
link to this extract

»Adobe made a huge announcement today that will change the iPhone photography game entirely: the newest version of Lightroom Mobile for iOS now lets you capture RAW DNG photos right inside the app.

This is huge news made possible by the release of Apple’s newest operating system, iOS 10. Lightroom Mobile could already edit RAW files before this, but never before has an iOS app been able to capture DNG RAW photos natively. The quality and latitude of your iPhone photos is about to get a whole lot better.

However: only for the iPhone 6S/Plus, iPhone SE, iPhone 7/Plus.. and iPad Pro 9.7 (mini Pro). RAW is big for photographers; it’s been supported in Android since Lollipop (beginning of 2015), so is now available to 50% of active devices.
link to this extract

Tested: this all-AMD $650 PC proves VR-ready rigs don’t have to be expensive • PCWorld

»Experiencing virtual reality will blow your mind, but it’ll also demolish your wallet. Or at least that’s what people think, and that perception was exacerbated when Oculus’s CEO said that building a Rift setup from scratch will set you back a cool $1,500. Since the Oculus Rift itself costs $600, that implies you’ll need a $900 PC to run it. I often hear people say you’ll need to spend about $1,000 on a PC for VR.

Nothing could be further from the truth—and it’s all thanks to AMD.

$650 or so and it’s yours. Now you just need to find some content for it.
link to this extract

Steve Kondik: There won’t be “much if any” involvement from Cyanogen Inc. on CyanogenMod 14 • Android Police

»If a comment on a CyanogenMod commit thread by founder Steve Kondik is any indicator, rumors that Cyanogen Inc. is basically getting out of the OS development business seem to be coming to fruition. While the context of the comment is a rather specific commit thread, Kondik’s frustration seems to have led to him to say a bit more about Cyanogen Inc.’s future plans than the company may have liked:

There isn’t really going to be much if any involvement from the Inc this time around and I’m taking on a lot of stuff on my own to try and keep us moving forward.

This would appear to be at odds in some ways with the assurances Kondik gave to CyanogenMod community members about the for-profit Cyanogen Inc’s involvement back in July.

Cyanogen Inc (including myself) will still be sponsoring the project [CyanogenMod] and will continue to have an active role in it’s [sic] development.

I’m not sure how “an active role” in CyanogenMod’s development and “much if any involvement” in that development gel.

It cost BlackBerry, HP and Microsoft about a billion dollars each to write a new mobile OS – BB10, webOS, Windows Phone (well, HP bought theirs), with no guarantee of success. If the costs for development even of an Android offshoot are anywhere close, no wonder Cyanogen is getting out of it.
link to this extract