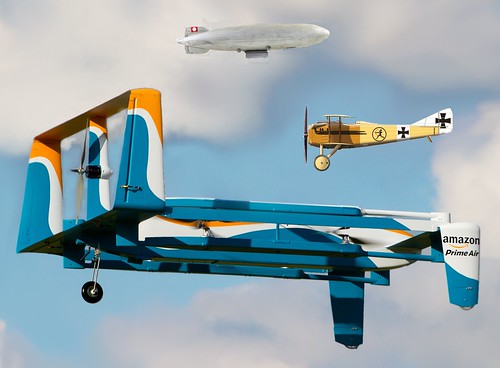 Coming soon to a sky near you! Photomontage by Mike Licht on Flickr.

A selection of 10 links for you. They really are. I’m charlesarthur on Twitter. Observations and links welcome.

Power in the age of the feudal internet • CoLab

On the corporate side, power is consolidating around both vendor-managed user devices and large personal-data aggregators. It’s a result of two current trends in computing. First, the rise of cloud computing means that we no longer have control of our data. Our e-mail, photos, calendar, address book, messages, and documents are on servers belonging to Google, Apple, Microsoft, Facebook, and so on. And second, the rise of vendor-managed platforms means that we no longer have control of our computing devices. We’re increasingly accessing our data using iPhones, iPads, Android phones, Kindles, ChromeBooks, and so on. Even Windows 8 and Apple’s Mountain Lion are heading in the direction of less user control.

I have previously called this model of computing feudal. Users pledge allegiance to more powerful companies who, in turn, promise to protect them from both sysadmin duties and security threats. It’s a metaphor that’s rich in history and in fiction, and a model that’s increasingly permeating computing today.

Feudal security consolidates power in the hands of the few. These companies act in their own self-interest. They use their relationship with us to increase their profits, sometimes at our expense. They act arbitrarily. They make mistakes. They’re deliberately changing social norms. Medieval feudalism gave the lords vast powers over the landless peasants; we’re seeing the same thing on the Internet.

The insurance industry has a $160bn blind spot: the driverless car.

Car insurers last year hauled in $200bn of premiums, about a third of all premiums collected by the property-casualty industry. But as much as 80% of the intake could evaporate in coming decades, say some consultants, assuming crucial breakthroughs in driverless technology make driving safer and propel big changes in car ownership.

As the threat approaches, U.S. insurance executives are spending millions and embedding with car companies, testing the technology themselves, and wrestling with whether to lower prices as parts of the autonomous future hit America’s roads.

For the actuaries who set insurance rates, it is a puzzle like no other: How do they prepare for a world of so many fewer auto accidents? In the future, will underwriters be insuring drivers or computer code?…

…Just as air bags and seat belts did in generations past, increasingly common semi-autonomous equipment is expected to offer significant improvements in safety. Among the most effective is automatic braking, which is in fewer than 10% of cars now but will be standard on new cars by 2022, according to the insurance-industry funded Insurance Institute for Highway Safety.

The Highway Loss Data Institute, a sister organization to IIHS, last year found that 11 front-crash-prevention systems from six manufacturers showed 10% to 15% lower rates of claims for damaging other vehicles, compared with models without the gear.

Google’s Nest is experiencing a widespread outage that has knocked its line of thermostats offline, a particularly scary situation given the widespread heatwave across the United States right now. Members of our staff noticed the thermostats weren’t functioning properly this morning, in multiple states around the U.S., and a quick search on Twitter shows a similar story.

This might only be a small number of thermostats, but it’s probably bloody annoying when it does. An internet of things that is completely reliant on an internet that isn’t reliable is less useful than “things that just do”.
link to this extract

A slump in iPhone sales eased in the third quarter, helped by demand for the new SE model, a low-end device aimed at consumers in China and other emerging regions. With the iPhone accounting for almost two-thirds of sales, Apple has been weathering a slowdown in the global smartphone market, and Chief Executive Officer Tim Cook has sought to emphasize surging revenue from services, such as the App Store, iCloud storage and Apple Music, as a way of making up for cooling device sales.

“We had a June quarter that was better than we had expected 90 days ago,” Chief Financial Officer Luca Maestri said by phone. “The March quarter seems to have been the low point for the cycle.”
“We had a very successful launch of iPhone SE,” Maestri said, adding that the company wasn’t able to fulfill demand for the lower-end device.

“There are some macro conditions that exist in China, both in mainland China and in Hong Kong.” he said. “The economy has slowed down and the foreign exchange rate has weakened.”

Sales of iPhones down by 15% year-on-year to 40.4m. Sales of iPads down (though iPad revenue rose – people and businesses are buying pricier Pros). Sales of Macs down from 4.8m to 4.25m. Watches unknown.

Sure needs a hardware refresh in the autumn to push things along. Though it was always going to be difficult to match the sales bump of the iPhone 6 and 6 Plus the year before.
link to this extract

How to make a…[something] • Kottke

A beautifully shot video of the process for making a fairly common object. Notice the point where you realise what it is. Notice also the stages which do involve a human, and the ones which don’t, and wonder: how long might those last?


link to this extract

Andrew McGill, who is writing a series about hacking together apps and devices, looks at the pain that is queueing for the US Department of Motor Vehicles, where staff allocations tend not to match demand:

If you time your visit right, you can beat the rush and save yourself from the soul-grinding sandpaper rasp of a normal DMV experience. But how can one understand the mysterious rhythms of America’s most-visited bureaucracy?

In this week’s project, I think I’ve found a way. The DMV in Washington, D.C., kindly provides webcam feeds of its centers, like this one in Georgetown. They’re updated every minute to show you the size of the crowd before you schlep down there. 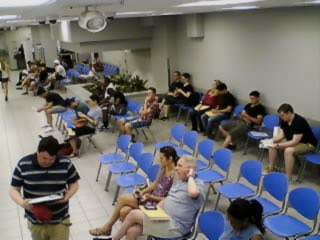 A programming concept called computer vision could help here. Computers aren’t good at intuitively understanding images—that’s why so many of those online human-checks you fill out before buying concert tickets or something involve deciphering a line of text in a picture. But they’ve gotten exponentially better at recognizing patterns. And in this case, the DMV long ago made a decision that will make determining the relative number of people in this photo very easy: They bought those goofy blue chairs.

The UK Passport Office in London could probably do something similar.
link to this extract

It started in Pensacola. When Popick first reached out to the Trump campaign about performing, he spoke with various people including former campaign manager Corey Lewandowski. His understanding from the campaign was that the Kids would make two appearances in Florida, where Popick lives. The first event didn’t come to fruition, and Popick says he asked for $2,500 in payment for the second performance, in Pensacola. The campaign made a counter-offer: How about a table where the group could pre-sell albums?

According to Popick, no table ever showed up—and the incident was the first of a series of broken promises and unreturned phone calls that went on all the way to the Republican National Convention in Cleveland. There, Trump’s team allegedly offered Popick a consolation prize and promised that the girls could perform because of all the previous disappointments. That performance never materialized either and now he says he’s planning to file suit.

Make friends and influence people. That’s the way.
link to this extract

Retail giant Amazon has partnered with the British government to test drones for package delivery—a major coup for the company, which is still forbidden from testing certain drone technologies in the U.S.

In June, the U.S. Federal Aviation Administration released updated rules governing drone use that opened American skies up to limited use of commercial drones. Crucially for Amazon, however, that did not include automated flights guided by GPS, or flights in which a drone leaves an operator’s line of sight.

The CAA’s rules don’t normally allow drones to travel more than 50m or to go out of line of sight. But Amazon’s announcement does talk of “partnership” to “explore the steps needed” – which include non-line-of-sight operations in rural and suburban areas, and multiple drones operated by one person.

Quite a strange future.

Earlier in the week I blogged about mobile banking security, and I said that in design terms it is best to assume that the internet is in the hands of your enemies. In case you think I was exaggerating…

Personally, I always use an SSL VPN when connected by wifi (even at home!) but I doubt that most people would ever go to this trouble or take the time to configure a VPN and such like. Anyway, the point is that the internet isn’t secure. And actually SMS isn’t much better, which is why it shouldn’t really be used for securing anything as important as home banking.

The report also described how gangs stole mobile security codes – which banks automatically send to card holders’ registered mobile phones to verify online transactions – by using either a Trojan virus in the smartphone or a device that intercepted mobile signals up to a kilometre away.

Of course, no-one who takes security seriously ever wanted to do things this way in the first place (which is why, for example, we used a SIM Toolkit application for M-PESA).

He has lots of suggestions for improvement..
link to this extract

Evans surveys the battlefield as the smoke clears:

it’s now perfectly clear that both Apple and Android have sufficient scale for their ecosystems to be viable (including the Android subset in China), and that no-one else does. But at the same time, once you’ve achieved that scale, further changes in market share are not very meaningful. It doesn’t matter to a product manager at a big US bank how many Android users there are in China, nor to a product manager launching in India how any iPhones are in California. Where your users are, which users you want and which users spend what is more important.

That is, the war is over. Yes, we’ll go from 2.5bn smartphones to 5bn, but the dynamics of the two ecosystems will not change much with that growth. Apple will get some more uses, perhaps, while Android will convert most of that next 2.5bn, but most of those people are in emerging markets and most will be buying phones for under $50 and certainly under $100.

Rather, the changes, and the things to think about, come from other directions – VR and AR on one hand, AI and machine learning on the other. They might change the balance between Apple and Google, but they’re more likely to make that distinction boring. I stopped updating my Nokia, RIM and Microsoft models a while ago – my Android and Apple models are increasingly lower on my priority list too.