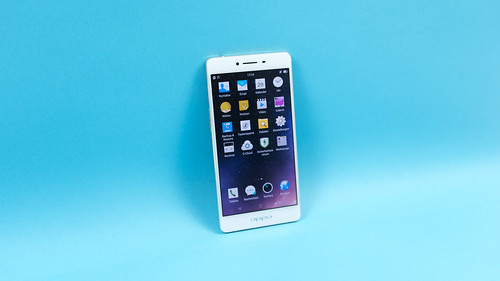 It’s a phone from China’s top-selling Android OEM in June. Can you name the company? If not, why not? Photo by TechStage on Flickr.

A selection of 10 links for you. What fun! I’m charlesarthur on Twitter. Observations and links welcome.

All signs point to Russia being behind the DNC hack • Motherboard

two months earlier, in April, the Democrats had noticed that something was wrong in their networks. Then, in early May, the DNC called in CrowdStrike, a security firm that specializes in countering advanced network threats. After deploying their tools on the DNC’s machines, and after about two hours of work, CrowdStrike found “two sophisticated adversaries” on the Committee’s network. The two groups were well-known in the security industry as “APT 28” and “APT 29.” APT stands for Advanced Persistent Threat—usually jargon for spies.

CrowdStrike linked both groups to “the Russian government’s powerful and highly capable intelligence services.” APT 29, suspected to be the FSB, had been on the DNC’s network since at least summer 2015. APT 28, identified as Russia’s military intelligence agency GRU, had breached the Democrats only in April 2016, and probably tipped off the investigation. CrowdStrike found no evidence of collaboration between the two intelligence agencies inside the DNC’s networks, “or even an awareness of one by the other,” the firm wrote.

To understand why Tim Armstrong just convinced Verizon to spend $4.83bn to buy Yahoo’s main business, you have to go back to April 2007.

Mr. Armstrong, then running North America advertising for Google, drove Google’s purchase of display ad firm DoubleClick, launching the search giant into banner advertising. By every measure it was a transformative deal, and it’s loomed large in Mr. Armstrong’s mind in the years since, multiple past colleagues say.

After he jumped to AOL from Google in 2009, Mr. Armstrong dreamed of building an ad network to rival the juggernaut Google became. For years, publishers have whined about wanting such an alternative. And Mr. Armstrong listened, believing you could build a better version of what DoubleClick had become.

Mr. Armstrong took a big step toward that goal last year when he signed a deal for AOL to sell Microsoft’s display advertising. The deal, struck in the wake of selling AOL to Verizon, gave him more ad space to sell to build out his network. Inside Verizon, the Microsoft deal is viewed as successful and part of the justification for taking a swing at Yahoo.

Now, he’ll get another influx of volume from Yahoo.

If this all sounds a little deja vu to you, it is. Microsoft, Yahoo and many others have tried to dethrone Google in online advertising and proposed all sorts of permutations around teaming up.

Oh sure, that’ll work.
link to this extract

Marissa Mayer has hit out at sexist coverage of her leadership at Yahoo, as she agreed to sell the bulk of the internet pioneer’s assets to Verizon for $4.8bn cash, ending the independence of the star of the 1990s dotcom boom.

Speaking after announcing a deal that will bring the company set up 22 years ago by Jerry Yang and David Filo under the same roof as fellow internet pioneer AOL, Ms Mayer decried reporting about her that focused on her gender.

“I’ve tried to be gender blind and believe tech is a gender neutral zone but do think there has been gender-charged reporting,” she told the Financial Times.

“We all see the things that only plague women leaders, like articles that focus on their appearance, like Hillary Clinton sporting a new pantsuit. I think all women are aware of that, but I had hoped in 2015 and 2016 that I would see fewer articles like that. It’s a shame.”

Ms Mayer, who has been repeatedly criticised by analysts for making a series of bad acquisitions and poor hires, will stay at Yahoo until the deal closes, but is unlikely to join Verizon, according to people familiar with the matter.

After she said in a post on the company’s Tumblr page that she planned to stay “to see Yahoo into its next chapter”, she admitted that it was unclear what would happen once the deal closes early next year.

The age of the red pen • The Economist

Natasha Loder on the new gene-editing technology that is sweeping through biotech:

One particularly impressive—and potentially worrying—application is in the creation of genes that can spread themselves quickly through a population with blithe disregard for the constraints of natural selection. Engineering the CRISPR-Cas9 system itself into a creature’s genome makes it possible for an organism to edit its own genes, and there are ways that this ability can be used to “drive” a gene through a population (see article). Such a technology might, proponents say, be used to make the mosquitoes that carry malaria, or dengue fever, unable to spread the organisms responsible for causing the disease.

The applications seem limited only by the imagination. Dr Zhang says CRISPR has enormous potential for treating previously intractable diseases. For example, genome editing may make it possible to eliminate viral infections within the body, creating entirely new antiviral treatments. He also speculates that it might be possible to make red meat that is less harmful, or to engineer pig organs so that they could be transplanted into humans with much less risk of rejection. Dr Church, for his part, has speculated about using gene editing to turn elephants into mammoths—or to recreate Neanderthals.

Long and detailed, but an important primer. You might not think CRISPR is going to affect you, but it could well affect your children. (Loder won a science writing prize for this piece.)
link to this extract

According to the latest research from Counterpoint’s Monthly Market Pulse, the demand for smartphones in China grew a healthy 17% annually in June. This was the best ever June month in terms of sell-through for smartphones, even though the overall market for the June-ending second quarter has seen modest growth over the first quarter of the year.Commenting on the results, Research Director, James Yan, highlighted, “The competitive environment in the world’s leading smartphone market has taken an interesting turn as domestic brands have significantly ramped-up their positions in the smartphone market. Oppo became the number one brand in China for the first time ever in June surpassing Huawei, Apple and Xiaomi with a record 23% market share with sales volumes up a massive 337% annually for the month…

…Chinese brands now control more than 84% of the total Chinese smartphone market as they exert an iron grip on the sales channels, industrial design curve and leverage access to Chinese supply chain. Their dominance extends across the price bands even extending in to the premium segment with models such as Huawei P9, Oppo R9 Plus and Vivo X play 5.

Samsung is fading from view – from the leading 14.1% share in June 2014 to 4th place in 2015 to 5th equal (with Xiaomi) this year. And Xiaomi is fading too, on those numbers.
link to this extract

Ofcom should push for fibre – Ex BT CTO • The Register

a damning report by MPs last week that warned if BT doesn’t get its house in order and address its significant under-investment in Blighty’s infrastructure, Openreach should be structurally split from the former state monopoly.

Earlier this year the regulator stopped short of recommending a formal separation – but deliberately kept that option on the table. BT has denied the accusations of underinvestment, pointing to its plans to roll-out ultrafast speeds to 12 million homes in the next four years, 2 million of which will be fibre-to-the-premise (FTTP).

But Professor Peter Cochrane, former CTO and head of R&D at BT, has slammed BT’s emphasis on its hybrid copper G.Fast technology. “An ambition of 2 million FTTP delivery is no target at all. It’s woeful. It would be 48 years to get to all the homes.”

He says: “I have no patience with the arguments being put forward that we can do it all with copper. I mean, we can do all our transport by boats on rivers if you want.”

Cochrane believes the estimated speeds of 1Gbps for G.Fast are wrong. “It’s been tested in a laboratory under rather idealised conditions in the field. And some people are quoting they can do a gigabit over 200 meters – I can categorically tell you they cannot. What they can actually do is a gigabit over 20, possibly 30 meters. After that it just dies.

“If they had fibre to the pole at the end of my garden they might be able to deliver 200-300mbps.”

“We can do all our transport by boats on rivers if you want” ranks among the very finest technical putdowns I’ve heard.
link to this extract

The Pokémon Company, which is an affiliated company of Nintendo Co., Ltd. (the “Company”), holds the ownership rights to Pokémon. The Pokémon Company is going to receive a licensing fee as well as compensation for collaboration in the development and operations of the application.

Also, a peripheral device for use with the application, “Pokémon GO Plus,” which will be produced and distributed by the Company, is scheduled for release. All of the above are reflected in the financial forecast ending March 31, 2017 as set forth on April 27, 2016.

Spoilsports. Nintendo shares, which had doubled in value, plunged as a result of this fact-based announcement.
link to this extract

Hewlett Packard Enterprise is to bump up the price of its infrastructure gear in Blighty from Monday, blaming the crash in the value of UK sterling currency for the hike.

According to sources close to the matter, the cost of servers will go up between 6-7%, and storage and legacy networking by circa 10%.

El Reg understands this week was the cut-off date for ordering kit in HPE’s third quarter of fiscal ’16, even though its Q4 doesn’t start until 1 August.

“HPE always carefully considers any price changes for our products and adjusts prices based on exchange rates and currency fluctuations,” a spokeswoman told us.

The value of the British pound had fallen by roughly 7% against the US dollar in the 12 months prior to the EU Referendum, but since the Brexit vote was down around 15%.

Neil Young’s music service is apparently down, but not out. In a note posted to Pono’s front page, the hi-res music provider announced that it’ll be going offline for for “several weeks,” due to the recent acquisition of Omnifone, which has been the driving force behind the service’s infrastructure.

The company’s purchase has led Pono to seek a new partner for PonoMusic, striking a deal with 7 Digital, a London-based digital music platform that has worked with a number of high-profile partners, including Samsung and BlackBerry. In its letter, Pono insists that the move, while “well underway, [is] not yet complete,” hastening to add that the move won’t affect any of its dealings with big music labels.

What all of this means for the Pono faithful is no more music purchases for what’s likely to be several weeks from last Wednesday.

All twelve users must be upset.
link to this extract

According to a new AlphaWise Survey of smartphone owners in seven countries, the market may in fact be setting itself up for what Huberty calls a “potential supercycle.”

Most analysts’ estimates for Apple and Samsung, she says, imply that customers are sticking with their current phones longer and longer, stretching a replacement cycle that used to be 24 months to nearly 36 months.

But that’s not what customers are saying.

Quite an important distinction. The suggestion is that people have hung on to old phones for quite a while, but are now ready to upgrade. Well, next year will be.
link to this extract