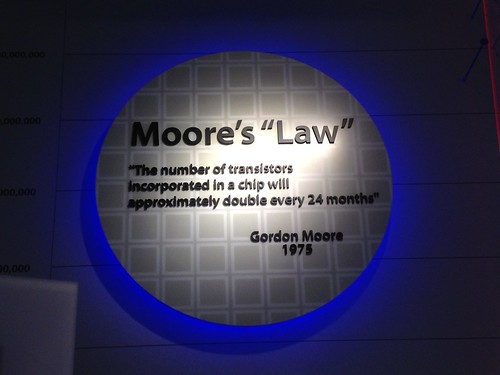 Moore’s Law is about to break completely. What then? Photo by sirexkat on Flickr.

If you’re reading this on email, there’s no need sign up to receive each day’s Start Up post by email. The rest of you…

A selection of 8 links for you. Ah-hah! I’m charlesarthur on Twitter. Observations and links welcome.

IBM’s initial plan was to apply Watson to extremely hard problems, announcing in early press releases “moonshot” projects to “end cancer” and accelerate the development of Africa. Some of the promises evaporated almost as soon as the ink on the press releases had dried. For instance, a far-reaching partnership with Citibank to explore using Watson across a wide range of the bank’s activities, quickly came to nothing.

Since adapting in 2014, IBM now sells some services under the Watson brand. Available through APIs, or programming “hooks” that make them available as individual computing components, they include sentiment analysis — trawling information like a collection of tweets to assess mood — and personality tracking, which measures a person’s online output using 52 different characteristics to come up with a verdict.

At the back of their minds, most customers still have some ambitious “moonshot” project they hope that the full power of Watson will one day be able to solve, says Mr Kelly; but they are motivated in the short term by making improvements to their business, which he says can still be significant.

This more pragmatic formula, which puts off solving the really big problems to another day, is starting to pay dividends for IBM. Companies like Australian energy group Woodside are using Watson’s language capabilities as a form of advanced search engine to trawl their internal “knowledge bases”. After feeding more than 20,000 documents from 30 years of projects into the system, the company’s engineers can now use it to draw on past expertise, like calculating the maximum pressure that can be used in a particular pipeline.

The $1.2bn offer is a 53% premium on Opera’s close as of February 4 on the Oslo stock exchange. Trading of the company has been suspended for two days following buyout rumors.

“There is strong strategic and industrial logic to the acquisition of Opera by the Consortium,” Opera CEO Lars Boilesen said on Wednesday. “The Consortium’s ownership will strengthen Opera’s position to serve our users and partners with even greater innovation, and to accelerate our plans of expansion and growth.”

Opera began looking for a buyer in August 2015, following slumping earnings after a steady loss of browser marketshare and slowing advertising sales.

Missed the “fat lady sings” headline.
link to this extract

FBI Director James Comey said on Tuesday that federal investigators have still been unable to access the contents of a cellphone belonging to one of the killers in the Dec. 2 shootings in San Bernardino, California, due to encryption technology.

Comey told the Senate Intelligence Committee that the phenomenon of communications “going dark” due to more sophisticated technology and wider use of encryption is “overwhelmingly affecting” law enforcement operations, including investigations into murder, car accidents, drug trafficking and the proliferation of child pornography.

“We still have one of those killer’s phones that we have not been able to open,” Comey said in reference to the San Bernardino attack.

So they’re not actually trying to figure out who the culprits are. So, crypto works?
link to this extract

What NOT to do with your Android device » AndroidAuthority

About a month ago now, Reddit user 19683dw pointed out the fact that there aren’t really many guides out there that attempt to tackle this issue. He and fellow redditors put together a great list of points, and it inspired us to run with his idea and dig a bit deeper. Not every point made in the Reddit thread is mentioned here, and we also added several different points of our own, but we do recommend checking out the original post and wanted to give a big thanks to 19683dw for putting this idea on our radar.

Among them: “don’t install the official Facebook app” (rapidly becoming this year’s meme on both iOS and Android); “don’t expect an Apple-like experience”; and “don’t install apps with unnecessary permissions”.
link to this extract

In the late 1940s, the United States air force had a serious problem: its pilots could not keep control of their planes. Although this was the dawn of jet-powered aviation and the planes were faster and more complicated to fly, the problems were so frequent and involved so many different aircraft that the air force had an alarming, life-or-death mystery on its hands. “It was a difficult time to be flying,” one retired airman told me. “You never knew if you were going to end up in the dirt.” At its worst point, 17 pilots crashed in a single day.

The two government designations for these noncombat mishaps were incidents and accidents, and they ranged from unintended dives and bungled landings to aircraft-obliterating fatalities. At first, the military brass pinned the blame on the men in the cockpits, citing “pilot error” as the most common reason in crash reports. This judgment certainly seemed reasonable, since the planes themselves seldom malfunctioned. Engineers confirmed this time and again, testing the mechanics and electronics of the planes and finding no defects. Pilots, too, were baffled. The only thing they knew for sure was that their piloting skills were not the cause of the problem. If it wasn’t human or mechanical error, what was it?

A very subtle story, well told. Applicable to lots of things today too.
link to this extract

“I just had the iPad. I didn’t touch his computer, it was too confusing to me … I didn’t realize he had a specific password I should have known about … it just never crossed my mind,” Bush said. So when her card game app stopped working, the family tried to reload it and realized it couldn’t be done without the password.

That’s when her daughter, Donna Bush, called Apple to ask if it could help retrieve the password or reset the account. The Bushes could get a new Apple ID account and start from scratch, but that would mean repurchasing everything they had already paid for.

“I just called Apple thinking it would be a fairly simple thing to take care of, and the person on the phone said, ‘Sure, no problem. We just need the will and the death certificate and to talk to Mom.'”

But when Donna called back along with her mother and the requested information, she said, customer service had never heard of her.

After many phone calls and two months of what she describes as the “runaround,” Donna provided Apple with the serial numbers for the items, her father’s will that left everything to his wife, Peggy, and a notarized death certificate — but was told it wasn’t enough.

“I finally got someone who said, ‘You need a court order,'” she said.

Clearly Apple needs to figure out if a death certificate is enough, or not. A lot of these stories – about all sorts of companies – boil down to “but we called customer service again and got a different story..” The procedures are there, but not applied.
link to this extract

The chips are down for Moore’s law » Nature News & Comment

The industry road map released next month will for the first time lay out a research and development plan that is not centred on Moore’s law. Instead, it will follow what might be called the More than Moore strategy: rather than making the chips better and letting the applications follow, it will start with applications — from smartphones and supercomputers to data centres in the cloud — and work downwards to see what chips are needed to support them. Among those chips will be new generations of sensors, power-management circuits and other silicon devices required by a world in which computing is increasingly mobile.

The changing landscape, in turn, could splinter the industry’s long tradition of unity in pursuit of Moore’s law. “Everybody is struggling with what the road map actually means,” says Daniel Reed, a computer scientist and vice-president for research at the University of Iowa in Iowa City. The Semiconductor Industry Association (SIA) in Washington DC, which represents all the major US firms, has already said that it will cease its participation in the road-mapping effort once the report is out, and will instead pursue its own research and development agenda.

Everyone agrees that the twilight of Moore’s law will not mean the end of progress. “Think about what happened to airplanes,” says Reed. “A Boeing 787 doesn’t go any faster than a 707 did in the 1950s — but they are very different airplanes”, with innovations ranging from fully electronic controls to a carbon-fibre fuselage. That’s what will happen with computers, he says: “Innovation will absolutely continue — but it will be more nuanced and complicated.”

For more context, note that Intel is going to do three, rather than two, generations of 14-nanometre chips before going for 10nm.

This is an inflexion point whose importance we might only realise some years from now.
link to this extract

Ex-TalkTalker TalkTalks: records portal had shared password; it was 4 years old » The Register

Fraudsters who attempted to scam TalkTalk customers by using records of their maintenance engineer visits are thought to have bought that info from current or former staff.

According to one ex-TalkTalk employee, who asked not to be named, the company uses a third-party system called Qube Portal to book visits and record information. The platform is also used by EE and BT for booking third-party engineer appointments. Our source speculated that criminals may have gained access to TalkTalk information via the portal.

Our insider said: “Some of these reports can be somewhat humorous. For example: ‘Customer answered door wearing an adult nappy*’.”

Approximately 1,000 agents based in India, where TalkTalk’s technical support team operates, have access to that information. Our source said only about 100 agents in the UK are familiar with the system.

The source also claimed that the system was accessed by a shared login and password that hadn’t changed for the last four years.

He said: “My educated guess is that the details were leaked by offshore Indian agents.”

The latter not a surprise, but the details of the poor security are eye-opening. It’s increasingly evident that large organisations can’t do effective security. Not even the NSA, of course.
link to this extract

1 thought on “Start up: Watson seeks a use, what not to do with Android, TalkTalk insider on (in)security, and more”