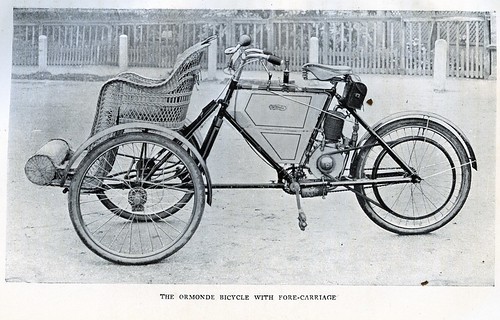 Modern motors in bikes are better concealed than this. Photo by rich701 on Flickr.

Gavin Kearney has a telescopic view of the threat facing Dublin’s Silicon Docks, the watery frontier of Ireland’s tech sector. He is braced this week for the first of three verdicts that will have sweeping repercussions on both sides of the Atlantic.

Since Kearney founded the encryption business Jumble two years ago, he has watched Ireland come under fire from the European Court of Justice, the European Union and the U.S. Department of Justice.

The cases involve Facebook, Apple and Microsoft and will decide critical issues confronting the tech industry: data protection and privacy, and corporate tax strategies. The results could spoil Ireland’s reputation as a tech hub, spark an exodus of jobs and investment, and force some to pay hundreds of millions in back taxes.

“If somehow Ireland’s data protection was eroded to be more American and less EU, those entities affected may have to relocate some of the operations to restore the balance,” said Kearney, the chief executive of Jumble. “There’s a bit of a perfect storm in terms of the timing of these issues hitting, but it’s a continent-wide problem and not just a standalone country, so we can shore up against it.”

Microsoft is paying around $250m to acquire London-based Swiftkey, maker of a predictive keyboard powered by artificial intelligence that is installed on hundreds of millions of smartphones, according to people familiar with the deal.

Jon Reynolds and Ben Medlock, who founded the company in 2008 when both were in their 20s, will each make upwards of $30m from the buyout, which is set to be announced this week.

The pair together own a substantial minority stake in the company after raising a relatively small amount of venture capital, just over $20m, from backers including Accel Partners, Index Ventures and Octopus Investments.

Swiftkey is the latest in a string of UK start-ups with advanced artificial-intelligence capabilities to be snapped up by the biggest names in Silicon Valley.

Great for Swiftkey, though it’s another example of a British firm being gobbled up by an American one. The broader question – why does Microsoft want a smartphone keyboard company? – is more important; the AI element must be really relevant to something it’s doing.
link to this extract

Yahoo Inc. on Tuesday announced plans to eliminate roughly 15% of its workforce and explore “strategic alternatives” for its struggling Internet business, in the strongest indication yet that the company’s board is considering a sale of its Web properties.

The announcement accompanied Yahoo’s fourth-quarter report in which the company reported a loss of $4.4bn, hurt by write downs on Tumblr and other assets, as revenue grew 1.6% to $1.27bn.

But advertising is the way that all sites can thrive, surely? Maybe Yahoo will turn out to be the biggest ad-supported web failure.
link to this extract

The motor is connected to a battery pack via the electronic control unit housed in the seatpost provided. By default the battery lives in a saddlebag, but it can also be concealed in a bidon seated in the seatpost bidon cage (more on that in a moment).

A simple button to start and stop the motor is then mounted on the underside of the handlebars and routed to the control unit in the seat post.

The Vivax assist motor is rated at 200 watts (the maximum for e-bikes in Australia is 250W, beyond which they are classified as motorbikes) but in reality, we were told, the unit provides somewhere in the vicinity of 110W to the driveshaft. This is in addition to whatever the rider is pushing through the pedals.

After yesterday’s article about the secret motor in a competing rider’s bike. (Thanks Mark Gould for the link.)
link to this extract

Breaking down Alphabet’s Other Bets » Beyond Devices

We’ve taken a look at several aspects of Alphabet’s Other Bets segment, but we’ve only touched on perhaps the most important element: trajectory. In other words, which direction are these numbers heading in? In brief, using Ruth Porat’s suggestion to look at annual results:

None of those is moving in a happy direction as far as the future financial performance of Alphabet is concerned.

Google’s ad business is still going strong (principally through growth in ads on YouTube), making up 90% of its revenues, and more of its profit.
link to this extract

Mark Gurman (who has a strong track record on these things):

As we revealed last month, Apple is planning to reinvigorate the 4-inch iPhone screen size by replacing the iPhone 5s with an iPhone 5se that includes an A9 chip, improved cameras, support for taking Live Photos, and Apple Pay. While the internals are revamped, the 5se’s externals nearly mirror the 5s’s save for “less shiny” and possibly slightly curved edges. The 5se will be priced the same as the 5s, according to sources, starting at $450 for 16GB. A 64GB model will also be offered.

The launch of the new iPad Air 3 will mark the first significant upgrade to Apple’s 9.7-inch tablet line since the Air 2 debuted in October 2014. The Air 3 is expected to include iPad Pro features like enhanced speakers and a Smart Connector, which could mean that a smaller Smart Keyboard is on the way.

Basically brings the iPhone 5S into iPhone 6 capability, apart from the screen. Will the iPad update get the line selling again, though? Other outlets with good track records have confirmed the date of 15 March.
link to this extract

In 2010 Apple made a patent application outlining a concept of using an iMac personal computer as a hub for wirelessly recharging at a distance of about 1 meter using a technique called near-field magnetic resonance. Apple currently uses a similar technique, called induction, to charge its Watch within millimeters of the power source.

Another Apple patent outlined a method for making aluminum phone casings that allow radio waves to pass through, a technique that would minimize the problem of metal interfering with transmitted signals.

Apple has previously played down its interest in any charging technology that still needs to be plugged into a wall socket because such methods would add little convenience.

Semiconductor makers Broadcom and Qualcomm are among those who have developed or are developing technology and standards for wireless charging.

How much demand is there for wireless charging?
link to this extract

The DailyMail Online is the biggest English language site in the world with 220m unique monthly actives, high engagement and virality of content. It’s a machine.

Yet, in its recent quarterly results announced today, the MailOnline reported advertising revenues of £23m on those 220m.

As the FT’s Lex column points out – that is just 10c of revenue per user [per month].

Not much return for the huge amount of effort put into the content (same may argue that it’s doesn’t take much effort to generate more gossip on the Kardashians, but actually the MailOnline has gossip down to an art form, which is why they are the biggest).

Compare my estimate of The Guardian’s revenue per browser per month of 6.16p.
link to this extract