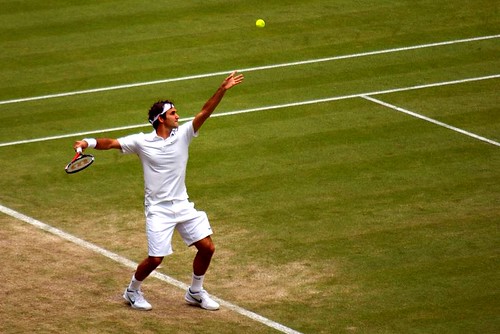 Quiet eye? Roger Federer winds up to serve. Photo by not enough megapixels on Flickr.

You can now receive each day’s Start Up post by email. You’ll need to click a confirmation link, so it ain’t spam.

A selection of 11 links for you. Hug them to your chest like your long-lost children. I’m charlesarthur on Twitter. Observations and links welcome.

Microsoft has today detailed why they chose to pull the Windows 10 November Update from Windows Update and the Media Creation Tool over the weekend. Their initial comment regarding the situation claimed the company decided that all users needed to update via Windows Update, but it appears that was not the entire story.

Until recently, most researchers viewed these skills in terms of coordination and reflex, believing that those who were better at making a free-throw or suturing a wound simply had had superior physical dexterity. But in the past few years, a small group of neuroscientists have identified a new way of understanding coordination, one that focuses on visual and cognitive skills over physical prowess.

The concept, known as the quiet-eye theory, is deceptively simple: Before you perform an action, you focus your gaze on the salient aspects of your goal—the rim, the catcher’s mitt, the malignant tissue, and so on. In recent years, using eye-tracking technology, researchers have found that locking onto the relevant stimulus during the right time frame—typically the few hundred milliseconds before, during and after the movement—greatly improves your chances of success.

“When your eyes provide the data, your motor system just knows what to do,” says Joan Vickers, a cognitive psychologist at the University of Calgary and one of the originators of the quiet-eye theory. “Your brain is like a GPS system. It detects target, speed, intensity, and distance.”

There are a larger variety of Android devices than Apple devices. Forensic examiners are able to bypass passcodes on some of those devices using a variety of forensic techniques. For some other types of Android devices, Google can reset the passcodes when served with a search warrant and an order instructing them to assist law enforcement to extract data from the device. This process can be done by Google remotely and allows forensic examiners to view the contents of a device.

For Android devices running operating systems Lollipop 5.0 and above, however, Google plans to use default full-disk encryption, like that being used by Apple, that will make it impossible for Google to comply with search warrants and orders instructing them to assist with device data extraction.

Did not know about the remote reset.
link to this extract

The iPad mini’s best days are behind it. Using app analytics data from Fiksu and Mixpanel, along with my own iOS device sales estimates and projections, I was able to derive iPad mini sales since launch. Over the past two years, iPad mini sales trends have deteriorated much faster than most people think. When taking into account the move to larger iPhones and iPads, the iPad mini’s value proposition has likely been weakened to such a degree that the decline in sales is permanent.

Seems that the real decline in iPad sales is of the mini – not the bigger one. So how will the giant iPad fare? Cybart’s analysis is always thoughtful.
link to this extract

First, you might have a stake in these companies if you own any actively managed mutual funds, perhaps through your retirement plan. According to Todd Rosenbluth, director of mutual fund research at Standard &Poor’s, large mutual funds have been investing in non-public companies for years. “Most people have no idea.” he says. The payoffs can be big if some of these firms successfully go public, but the risks are significant because it’s impossible to assign a consistent, accurate value to these investments, and they are hard to sell if the fund faces redemptions. However, regulation keeps mutual funds from holding large amounts of private shares, which would mitigate the impact. “It’s a tiny part of their portfolios,” Rosenbluth says. For example, only about 2% of the Fidelity Blue Chip Growth fund is made up of tech startup investments.

The second way you’re exposed is through public pensions, whether you’re a direct beneficiary or not.

Feels like a stretch, to be honest. And certainly nothing like the dot-com bust.
link to this extract

Visit YouTube Kids and it typically does not take long before promotions for junk food appear. The advertisements regularly appear in the form of funny contests and animated stories.

In complaints filed to federal officials on Tuesday, two prominent consumer advocacy groups argued that those ads are deceptive, particularly for children. The two complaints, made to the Federal Trade Commission, expand on filings the groups made to the agency in April and could increase pressure on federal officials to intervene in the fast-growing online video market.

The groups, the Campaign for Commercial-Free Childhood and the Center for Digital Democracy, argue in the complaints that online video aimed at children has become too commercialized and is not held to the same standards as cable and broadcast TV. The complaints call for an investigation of food marketers, video programmers and Google, which owns YouTube, as well as a broad examination of advertising of such food to children online.

If YouTube by default becomes the new online TV, shouldn’t it be held to the same standards as broadcast TV?
link to this extract

Sony employees on the hack, one year later » Slate

Outside Sony, it would eventually seem as if all the studio’s info had been exposed for everyone to see. But inside the studio, nobody could access anything. “Everything was so completely destroyed. It was surreal. Everything was down,” one ex-employee told me. “It wasn’t just one system or one part of the lot or one building. The network was completely chewed up by the virus.”

“It was like a bomb went off,” one staffer says. “We looked around. We were still alive. So we started doing triage.”

The telephone directory vanished. Voicemail was offline. Computers became bricks.  Internet access on the lot was shuttered. The cafeteria went cash-only. Contracts—and the templates those contracts were based on—disappeared. Sony’s online database of stock footage was unsearchable. It was near impossible for Sony to communicate directly with its employees—much less ex-employees, who were also gravely affected by the hack—to inform them of what was even happening and what to do about it. “It was like moving back into an earlier time,” one employee says. The only way to reach other Sony staffers was to dial their number directly—if you could figure out what it was—or hunt them down and talk face to face.

NeuralTalk and Walk from Kyle McDonald on Vimeo.

Andrej Karpathy’s “NeuralTalk” code (github.com/karpathy/neuraltalk2) slightly modified to run from a webcam feed. I recorded this live while walking near the bridge at Damstraat and Oudezijds Voorburgwal in Amsterdam.

All processing is done on my 2013 MacBook Pro with the NVIDIA 750M and only 2GB of GPU memory. I’m walking around with my laptop open pointing it at things, hence the shaky footage and people staring at themselves.

Pretty smart.
link to this extract

Four researchers have found two thirds of the most popular Android apps indulge in seemingly-useless covert chatter with remote servers.

Top developers including Gameloft, Unity3d, and grillgames are implicated to varying degrees.

The chatter has no use to users. About half of the traffic is related to analytics, such as that used by Twitter and Pandora, with the rest of unknown purpose.

They make the findings in the paper Covert Communication in Mobile Applications (PDF).

“…In fact, some applications start collecting analytics information even before they get activated. For example, twitter, Walmart and Pandora start their data collection as soon as the phone is booted and continue, periodically, during the phone’s entire up time, even if the applications themselves were never used. In most cases, the user cannot opt-out from such data sharing without uninstalling the application.”

Five apps died when the covert chatter was killed off after the code in question was manipulated by the research team.

Stillman wrote a simple Javascript extension that grabs sites and passwords, yet passes Mozilla’s “scanner” which looks for “malware”:

I asked in February how the scanner would possibly catch things like this, and the response from Mozilla’s Add-ons Developer Relations Lead was that most malware authors are lazy and that he believed the scanner could be made to “block the majority of malware”. The fact that, nine months later, and a few weeks before an enforcement deadline that was already postponed by several months, someone can write a trivial extension in a few minutes that steals passwords, runs a local process, and executes arbitrary remote code, but that is still automatically signed, demonstrates just how ill-conceived this scheme is. It also destroys any argument that whitelisting would put users at greater risk for malware, and it’s infuriating that we’ve had to waste the last few months arguing about the dangers of a whitelisted Zotero. And it’s just depressing that the entire Mozilla developer community spent the last year debating extension signing and having every single counterargument be dismissed only to end up with a system that is utterly incapable of actually combating malware.

According to Counterpoint Research, only 1.2m units of Android One [handsets] were shipped to India during its first year (September 2014 to September 2015) in the country, making up only 3.5% of the $50-$100 phone market, the segment which sells the most phones.

Only 3m devices are said to have been shipped in total across the 19 countries that Android One has launched in. Of this, 85% of sales took place in the Asia-Pacific market.

Counterpoint’s Tarun Pathak said that for Android One to succeed in India, Google and its partners need to scale down to lower price points and differentiate the product from biggest competitor which is “Android” itself, which is competing with Android One via original equipment makers (OEM) that are present across $50-$100 price band in India.

Lack of LTE turns out to be a key mistake.
link to this extract

1 thought on “Start up: why Win10 update was pulled, Android v the law, post-iPad mini, neural nets on the move, and more”