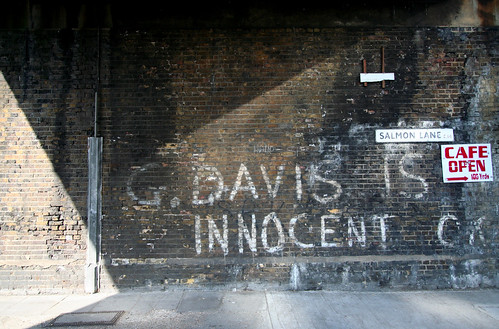 Replace “George Davis” with “Google” and you get its message. Photo by ross mcross on Flickr.

In its first appearance in the wearables market, Apple finds itself within striking distance of the established market leader, Fitbit. According to the International Data Corporation (IDC) Worldwide Quarterly Wearable Device Tracker, Apple shipped a total of 3.6 million units in the second quarter of 2015 (2Q15), just 0.8m units behind Fitbit’s 4.4m units. Total shipment volume for the quarter came to 18.1m units, up 223.2% from the 5.6m units shipped in 2Q14.

“Anytime Apple enters a new market, not only does it draw attention to itself, but to the market as a whole,” noted Ramon Llamas, Research Manager for IDC’s Wearables team. “Its participation benefits multiple players and platforms within the wearables ecosystem, and ultimately drives total volumes higher. Apple also forces other vendors – especially those that have been part of this market for multiple quarters – to re-evaluate their products and experiences. Fairly or not, Apple will become the stick against which other wearables are measured, and competing vendors need to stay current or ahead of Apple. Now that Apple is officially a part of the wearables market, everyone will be watching to see what other wearable devices it decides to launch, such as smart glasses or hearables.”

This rather mixes oranges and.. um, because the Fitbit is not a “watch”. I’d prefer to see “watches” and “bands” separated, but that might be tricky. Telling that none of the Android Wear watches did more than 0.6m; and that Samsung’s early lead hasn’t translated into, well, anything. The figure for Apple Watches feels high, though.

Also: “hearables”?
link to this extract

The realities of a $50 smartphone » Engadget

“If you had asked me this a year ago, I would have said that it was impossible.” Wayne Lam is the principal telecoms analyst for IHS, a market intelligence firm that looks at the technology market. As part of the experiment, he offered to cook up a hypothetical device that, if someone built it today, could probably be mass-produced for under $50. He worked out that the upper limit for a bill of materials would be around $42, and worked backward to build out a spec list from there. It wasn’t pretty, since “any time you put a constraint on the design, like a maximum price, you end up having to make compromises.”

Really impressive. Of course, that doesn’t leave any margin for distribution, marketing, or R+D, but it’s amazing the market has come so far in just eight years.
link to this extract

Harry Brignull and others:

Normally when you think of “bad design”, you think of the creator as being sloppy or lazy but with no ill intent. This type of bad design is known as a “UI anti-pattern”. Dark Patterns are different – they are not mistakes, they are carefully crafted with a solid understanding of human psychology, and they do not have the user’s interests in mind. We as designers, founders, UX & UI professionals and creators need to take a stance against Dark Patterns.

You can send them your examples via the site.

The major players, such as HP, Lenovo and Dell, would gain nothing on the technology front from buying Acer – which derived 65% of its revenues from PCs last year – save for perhaps some low-margin market share.

Surely it would be cheaper to let the company continue to wither on the vine?

More than a decade ago, Acer said it was the PC maker of the future, based partly on the relatively tiny workforce – it employs 7,000 heads, which is fewer than some vendors employ in their country operations.

As we pointed out recently, Acer is running out of runway and something has to give. We doubt any of the majors in the industry will want to buy the business, and the politics involved in merging with Taiwanese rivals HTC or Asus make such a move unlikely, though not entirely implausible.

Becoming a question of whether Acer or HTC will be forced into someone else’s arms first. Acer is bigger, but shrinking fast.
link to this extract

All iOS 9 devices running apps built with Xcode 7 that don’t disable ATS [App Transport Security, which forces HTTPS connections] will be affected by this change. The following log message appears when a non-ATS compliant app attempts to serve an ad via HTTP on iOS 9:

“App Transport Security has blocked a cleartext HTTP (http://) resource load since it is insecure. Temporary exceptions can be configured via your app’s Info.plist file.”

While Google remains committed to industry-wide adoption of HTTPS, there isn’t always full compliance on third party ad networks and custom creative code served via our systems. To ensure ads continue to serve on iOS9 devices for developers transitioning to HTTPS, the recommended short term fix is to add an exception that allows HTTP requests to succeed and non-secure content to load successfully.

Publishers can add an exception to their Info.plist to allow any insecure connection.

Translation: ads are insecure, and trackable, but let them through. (Obviously, many app developers will need to for revenue.) Once again, Apple is forcing the pace on advertisers.
link to this extract

Why phone fraud starts with a silent call » All Tech Considered : NPR

Maybe you gave your number to Target or some other big retailer that got hacked. Maybe you entered an online raffle to win a free iPhone.

According to the Federal Trade Commission, these robocalls are on the rise because Internet-powered phones make it cheap and easy for scammers to make illegal calls from anywhere in the world.

That initial call you get, with silence on the other end, “[is] essentially the first of the reconnaissance calls that these fraudsters do,” Balasubramaniyan says. “They’re trying to see: Are they getting a human on the other end? You even cough and it knows you’re there.”

The next step is gathering information about your bank or credit card account. You get a call with a prerecorded voice that tells you, for example, “[we’re] calling with an important message about your debit card. If you are the cardholder please stay on the line and press 1. Otherwise please have the cardholder call us at 1-877…”

If you’re thinking about ignoring it, the message tries to scare you into paying attention with a warning: “A temporary hold may have been placed on your account and will be removed upon verification of activity.”

That number leads to another automated system that prompts you to share personal details like your date of birth, your card number and secure PIN, the expiration date, your Social Security number.

It can be tricky because many real banks have a similar system.

Foolish of the banks, really.
link to this extract

The response we filed today [to the EC] shows why we believe those allegations [of stifling competition] are incorrect, and why we believe that Google increases choice for European consumers and offers valuable opportunities for businesses of all sizes.

The Statement of Objections [SO] says that Google’s displays of paid ads from merchants (and, previously, of specialized groups of organic search results) “diverted” traffic away from shopping services. But the SO doesn’t back up that claim, doesn’t counter the significant benefits to consumers and advertisers, and doesn’t provide a clear legal theory to connect its claims with its proposed remedy.

Our response provides evidence and data to show why the SO’s concerns are unfounded. We use traffic analysis to rebut claims that our ad displays and specialized organic results harmed competition by preventing shopping aggregators from reaching consumers. Economic data spanning more than a decade, an array of documents, and statements from complainants all confirm that product search is robustly competitive. And we show why the SO is incorrect in failing to consider the impact of major shopping services like Amazon and eBay, who are the largest players in this space.

Funny thing: I’ve skim-read the SO (it’s long – 100+ pages) and it picks away at lots of these traffic analysis claims (which were themselves dismantled thoroughly by Foundem, one of the complainants to the EC). Among the SO’s complaints was that Google didn’t provide enough data about shopping traffic. I don’t think the EC is going to roll over on this one. Nor, evidently, is Google. Though in arguing “choice for consumers” it’s using the wrong antitrust doctrine – that applies in the US, but not the EU.

Can’t find where Google has published its response, either. Surely it would want that public too? Also: an analysis of Google’s blogpost by “Focus On The User” (anti-Google, not involving Microsoft).
link to this extract

• Apple’s iAd is for brand advertising, not adtech. At least that’s what I gather from Apple’s literature. This puts them on the side of [advertising] wheat, and Apple’s competitors — notably Google, Facebook and all of adtech — on the side of chaff.

• Apple has put a big stake in the ground on the subject of privacy. This is clearly to differentiate itself from adtech in general, and from Google and Facebooks in particular.

• Brand advertising is more valuable to publishers than adtech. Its provenance and value are clear and obvious, it sells for better prices, and — while some of it may be annoying — none of it shares its business model with spam, which adtech does. Nor is brand advertising corrupted by fraud, which is rampant in adtech. So rampant, in fact, that T.Rob Wyatt, a security expert, calls adtech “the new digital cancer.”

This is why content blocking is chemo for the cancer of adtech. It is also why it is essential for everybody involved in the advertising-funded online ecosystem to start separating the wheat from the chaff, and to make clear to everybody that the wheat — plain old brand advertising — is (to mix metaphors) the baby in the advertising bathwater.

(Searls was taken to task for using “chemo” and “cancer”; he pointed out that he has had loved ones die of cancer, and “I’m not sure they would have disapproved of the metaphor.”)

As bandwagons go, the anti-adtech one is rolling downhill at top speed. I’ve already got three different ones I’m testing on an iOS 9 phone.
link to this extract

Bernal notes that the Labour Party is trawling social media to try to find out if newly joined members really “support” the party:

We should not expect people to have social media profiles – let alone identifiable social media profiles. What is more, this is particularly important for some of the people that Labour should care about and support the most. People may be ‘digitally excluded’, for a start – but they might also have extremely valid reasons to be pseudonymous on the internet. Vulnerable people, in particular, might need pseudonymity to protect them from those to whom they are vulnerable. Whistleblowers. People with abusive spouses. People with abusive or manipulative employers. Trade unionists, for example, might have that status used against them – there’s a reason that Trade Union membership is considered ‘sensitive personal data’ under the Data Protection Act. People might wish not to have their religion revealed to all and sundry. People might wish to separate their personal and professional lives for perfectly good reasons.

There is much more to say on this subject – but the underlying issue is the one that is most disturbing. What the Labour Party is doing may well breach the Data Protection Act – there is a discussion to be had here – but it is certainly at least verging on the creepy.

The Labour Party has long had a problem with privacy; it tried really hard to introduce ID cards (with biometrics!), and was only stopped by losing an election.
link to this extract