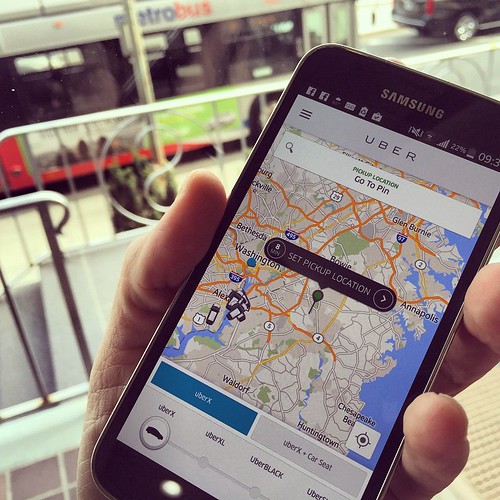 Lots of cabs, in theory. But in reality too? Photo by UrbanPaul on Flickr.

Microsoft, capitulation and the end of Windows Everywhere » Benedict Evans

A new CEO is acknowledging the end of ‘Windows Everywhere’ as the driving strategic engine for Microsoft, and also acknowledging the decline of Microsoft Office as the monolithic, universal experience for productivity. Microsoft is also suggesting that Xbox is not strategically core either, reflecting the reality that it will be the smartphone, not the TV or a box plugged into it, that will be the hub of the digital experience for most people. The smartphone is the sun and everything else orbits it.

This is a little like Google’s transition away from the plain-text web search as the centre of everything, and indeed Facebook’s tentative shifts away from the Newsfeed. Microsoft has two huge, profitable businesses in Windows and Office: they will slowly go away, so how do you use them to create something new? Instead of every new project having in some way to support Office and Windows, how do you use Office and Windows to support the future? You must distinguish between things that prop up the legacy Office and Windows businesses (and Microsoft is doing plenty to do that), while using them to drive the new things.

But you also need to work out was that ‘new’ would look like.

An FT analysis of LinkedIn profiles suggests about 12% of Twitter’s staff have left in the last year, including senior staff in corporate development and partnerships, and executives from its MoPub acquisition.

The figure is likely to underestimate the true number of departures as not every employee has a profile on the professional social network or keeps it up to date. Despite the staff turnover, the group’s total headcount has increased 18% in the last year.

Robert Peck, a SunTrust Robinson Humphreys analyst, wrote in a note that while “brain drain” is always a risk in the highly competitive technology industry, he was concerned that the large sums of capital raised by start-ups “increases the risk for Twitter during the chief executive transition” as employees could be lured to private rivals by valuable pre-initial public offering stock.

“While some key talent may leave the company while it is in flux, it may also be difficult to hire new key talent without a permanent chief executive being in place,” he wrote.

Apple requires anyone making a device compatible with its HomeKit environment to buy and use a special identity chip. The revelation was one of many from a session on platforms for the Internet of Things at last week’s ESC SV event here.

“I know a lot of people who have been surprised by this requirement and had to re-spin boards for the chip,” said Michael Anderson, chief scientist of PTR Group in his talk. “A lot of manufacturers are up in arms [about the] Apple silicon [that makes their] device more expensive,” he said.

“There’s no clear story what the chip does but I expect it is involved with access to the cloud and may have triggers for geo location,” Anderson said. Overall, “there’s not a lot known about HomeKit since it was first launched in iOS 8 because Apple’s got it under wraps,” he added.

Good way to add cost, but also a good way to be sure of security. Or.. a good way for everything to be susceptible to the same security flaw.
link to this extract

Ironically, I found my MacBook Air to be the best Windows 10 laptop. It may not have a touchscreen, but it was snappier, and beat the Dell and Surface for normal scrolling and navigating. (The three-finger swipe wasn’t enabled during my tests, however.) Windows 10 is in desperate need of a worthy PC laptop.

Another thing that’s made me a master Windows 10 multitasker is the ability to easily snap email to one side of the screen and a Web browser to the other. Microsoft included app-snapping in previous Windows versions, but now it suggests other open apps or windows to place next to it. It also lets you tile up to four windows on the screen. It’s a huge time saver, especially when helping herd the stray windows on my external monitor.

The feature is so great, Apple put it in its next version of OS X and iOS for the iPad. But Microsoft’s implementation is better, in part because it has addictive keyboard shortcuts.

The “smoking gun” is a 1927 version of the “Happy Birthday” lyrics, predating Warner/Chappell’s 1935 copyright by eight years. That 1927 songbook, along with other versions located through the plaintiffs’ investigations, “conclusively prove that any copyright that may have existed for the song itself… expired decades ago.”

If the filmmakers’ lawyers are right, it could mean a quick route to victory in a lawsuit that’s been both slow-moving and closely watched by copyright reform advocates. Warner/Chappell has built a licensing empire based on “Happy Birthday,” which in 1996 was pulling in more than $2m per year.
Plaintiff Jennifer Nelson’s movie is actually called Happy Birthday, and it’s about the song. She had to pay Warner/Chappell $1,500 to use the song in her movie, and that didn’t sit well with the documentarian. She’s seeking to get that money back and also represent a class of plaintiffs who have paid similar licensing fees to Warner/Chappell on a copyright she and her lawyers say is illegitimate.

The 1927 songbook referenced above was found in a batch of 500 documents provided by Warner/Chappell earlier this month. That cache included “approximately 200 pages of documents [Warner/Chappell] claim were ‘mistakenly’ not produced during discovery, which ended on July 11, 2014, more than one year earlier,” Nelson’s lawyers write.

This has been a thorn in peoples’ sides for years. It would be great for it to be wiped out.
link to this extract

Your car won’t be driving itself anytime soon » Forbes

Thejo Kote, co-founder and CEO of Automatic, which makes connectors for cars:

There is also the legal elephant in the room: liability. Car makers have always made sure that liability for the operation of a vehicle rests solely on the driver. The shift of liability to the manufacturer of the self-driving car is a huge change. Evaluating and understanding the risk they’re signing up for in a way that satisfies lawyers, legislators, and society at large is going to take a long time.

Auto insurance as we know it can’t be applied to self-driving cars; brand new insurance models will have to be developed. I work closely with senior executives at some of the largest insurers in the world, and while they’re actively preparing for the transition, even their most aggressive projections indicate that there won’t be any meaningful changes in the market for well over a decade.

Specs of course don’t tell everything. But she comes down on the side of the OnePlus (though it doesn’t have NFC).
link to this extract

There are two versions of Uber’s app: one for drivers to use to find passengers, and one for passengers to use to hail a ride. Frequently, drivers login to the passenger app to see where other drivers are so they don’t sit unknowingly in the same one-mile stretch as the competition.

What the passenger app shows can be deceptive, however. The discrepancy Heather noticed wouldn’t have been obvious in a busy location with a shorter wait time. But in more remote areas, the app clearly shows drivers where there are none.

Over a six month period, my colleague Luke Stark and I have been studying how Uber drivers interact with the Uber app as part of a research project funded by Microsoft FUSE Labs. Our research was conducted primarily in Uber driver forums, and through interviews with Uber drivers. We’ve observed that drivers across multiple forums discuss the fake cars they see on their own residential streets.

Ooh, this article is fascinating all the way through.
link to this extract