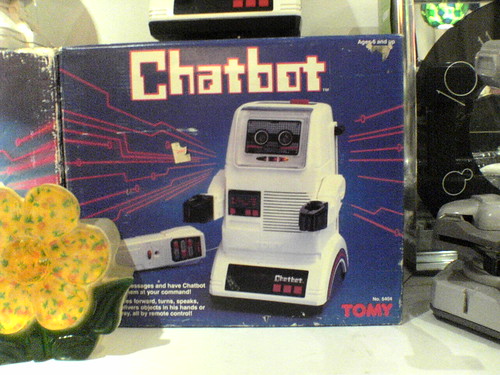 Think you could pretend to be one of these? Photo by anotherjesse on Flickr.

The Reverse Turing Test: pretending to be a chatbot is harder than you think » Motherboard

You don’t fully realize how complicated human conversation is until you try to look at it through the eyes of a bot. Alison’s “How about you?” is an example of what the professionals call a tag question. “How about you?” on its own is meaningless; it’s implicitly referring back to my own previous question of “How are you doing today?” Within a few short words you already have a complex system of meaning the bot needs to understand.

Soon Alison was bombarding me with dialogue.

“I am going swimming later. Then I’m going to be an astronaut. I like chocolate. Do you?”

While this isn’t exactly a normal human conversation, a human can easily deal with it. Think about all the things your brain does to process those sentences.

It knows that “I’m going [swimming]” and “I’m going [to be an astronaut]” encode completely different meanings, even though they have superficially similar structures.

Figuring out the gaps when you try to be a bot is surprisingly useful for figuring out what bots need to do. (Tiny voice asks: why do we want bots to be able to fool us, precisely?)

A division of the shipments shows Microsoft grabbed 7.6% of sales [0.57m handsets] during the quarter, up from 5.8% in the prior year quarter. The total market [for UK smartphone sales] declined 1.5% to 7.6m.

“Microsoft is slowly building share without a flagship or high-spec handset – they are after the volume end of the [professional] market. This strategy will probably change when Windows 10 comes out,” Coulling said.

Despite this, Windows barely touches the sides of the sprawling UK shipments achieved by phone royalty Samsung and Apple, the combined sales of which came to 4.93m units.

Sammy declined 8.5% in Q1 to 2.54m devices, giving it a 33.6% share of spoils, as it continued to work through the inventory bottleneck that ruined profits in 2014.

…Apple sales recovered on the back of the iPhone 6’s release, growing 7.8% to 2.43m units, narrowing the gap that Samsung opened up a year ago.

Windows Phone still not really doing anything. Maybe those are being bought by businesses?

With the Australian government wary of rocking the boat ahead of this month’s historic signing of a free trade deal, McGurk says he was forced to hire a private investigative firm in China to stage a series of raids on counterfeit factories.

Codan’s experience provides a rare look at the longer-term impacts of hacking on companies, as most keep the extent of an incident under wraps. In fact, experts say many firms continue to turn a blind eye to cybersecurity even as hackers become increasingly sophisticated.

Often forgotten that hacking has a purpose; often to steal intellectual property. (Though that’s how countries have advanced themselves down the centuries.)

Europe’s antitrust regulator has asked a broad swath of Internet commerce firms to hand over sensitive business information and copies of contracts as part of a sweeping investigation into possible abuses in the sector.

The investigation, announced in March, aims to establish whether some firms are raising contractual or other barriers to limit how consumers can shop online across national borders inside the European Union. The probe could lead to formal antitrust cases against individual companies that are suspected of abusing their dominant market position to restrict trade, in violation of EU law.

Margrethe Vestager really is getting serious.

Samsung calls this the “Ultimate Upgrade.” You have until the end of the day on July 5th to make your purchase.

As with most deals of this sort, you’ll need to submit a copy of your receipt, the device’s MAC address, and the IMEI. It needs to be purchased in the US (sorry, guys) from a carrier or national retailer (i.e. not on eBay or Craigslist). Samsung says it also needs to be purchased at “full price,” which I assume means no additional discounts. Presumably you can still do a contract or payment plan with your carrier.

We’re coming to the end of the Galaxy S6’s first full quarter on sale, and Samsung is offering discounts to encourage sell-through of higher-priced models. This doesn’t seem like a resounding vote of confidence in its sales. It’s also pricey, in marketing terms (though people are pretty rubbish at taking advantage of rebates).

According to Google, the speed of the cars is currently capped at a pretty conservative 25 miles per hour, and they’re driving around at that “neighborhood-friendly” speed using the same software that powered the Lexus line. Ultimately, the goal is for them to be completely autonomous, but it would make sense that Google wants to take that slow to avoid any more sensationalized stories about their safety…

The company announced in the middle of May that the cars had gotten the green light to be put on the road “this summer,” and it looks like “this summer” means right now. Assuming this round of tests go well, we’ll surely be seeing more cars hit the roads over the next few months.

Watch the Xperia Z3+ camera crash in about 3 seconds » AndroidPIT

We were pretty excited to get the Xperia Z3+ in for review. That is until we found one of the worst launch bugs we’ve ever seen. The problem is that the Xperia Z3+ camera crashes almost instantaneously when you throw anything even vaguely heavy at it.

By ”heavy” I simply mean using augmented reality mode or shooting 4K video for a few seconds. These are standard camera modes on the Z3+ so there really shouldn’t be any problems, especially in a phone that’s less than a week old. But we’ve been seeing the camera crash in 4K ever since the Z2. How Sony has failed to correct the issue two generations later is beyond me.

Commenters concur. The Snapdragon 810 chipset seems to be at the core (sorry) of the problem. And this does look like a problem.

Eternify leverages music from Spotify’s catalog in increments of 30 seconds, the minimum length that counts as a play—and as a royalty payment.

Pick your favorite artist, then watch in real time as you generate an average of $.005 for your artist with each play.

Appears to be registered in Germany. Can’t see Spotify allowing this to continue for long.