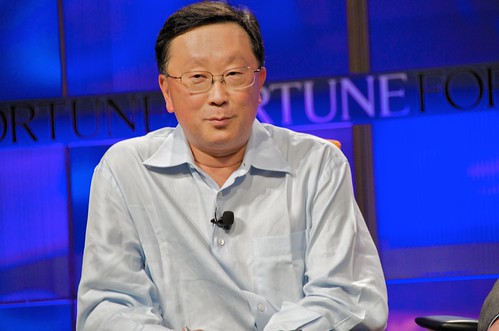 John Chen, BlackBerry’s chief executive, is a smart guy – but he’s got really big problems ahead. Photo by jdlasica on Flickr.

They really will let any old nonsense onto Seeking Alpha. On Wednesday there was a piece suggesting that “BlackBerry had a decent quarter; turnaround an extremely high probability“.

Yeah, and pigs will fly.

BlackBerry has a real problem, and it only becomes evident when you dig into the numbers. It’s this: BB7 users, who make up about 22m of its 33m subscribers, are deserting the platform at the rate of about 5m per quarter, while it’s only adding about 1m BB10 subscribers in the same period.

If this pattern continues, then by the end of this fiscal year – that is, February 2016 – there will be next to zero BB7 users, and only slightly more than 15m BB10 users. That will represent probably the bottoming out in subscribers, but will also mean that two key sources of revenue for BlackBerry – service revenues and handset sales – will effectively stop.

And in the just-gone quarter, those two categories made up 78% of its revenues – and the profit on the services, which only applies to BB7 users, amounted to about $211m.

Here’s the problem: once the BB7 users are gone, so are pretty much all the service revenues. And look how soon that could happen:

With 15m handsets in use, and BB users replacing theirs roughly every three years (as I found previously), that means 5m handset sales per year, which is about where the company is now – and it currently makes horrendous operating losses on handsets. There just isn’t the scale.

Without the service revenue, and because the handsets are horrible money pits, BlackBerry is left with just its software revenues for profit. And oh dear, those aren’t pretty.

Let’s get stuck in

Here are some extra facts dug out of BlackBerry’s Q1 2016 10-Q, the quarterly detailed report:

• 33m subscribers (I estimated 34m; so it has fallen 4m from the previous quarter, an acceleration in decline)

• a total of 1.3m phones were sold through to end customers. That means that over the past eight quarters BlackBerry has “sold” (recognised revenue on) 15m phones, and sell-through has been 23.3m – that’s 55% more. Clearly, there was a gigantic amount of channel stuffing going on previously. And of those 15m phones (or 23.3m, take your pick) only 9.7m were BB10 models.

On the basis that every BB10 handset goes to a new user… it’s still not great.

And the graph above shows that if it’s a straight line, that will be February next year.

• that much-vaunted jump in software revenues (from $54m to $137m year-on-year, and from $67m to $137m sequentially – a rise of $70m) was actually due to a mysterious patent deal, one with Cisco and another with an unnamed company.

Some thought the rise heralded BlackBerry rising from the ashes as a profitable software business; the stock popped on the early results. But as was clarified in the earnings call and the documents, compared to the year before, software revenues rose by over 20% (Chen suggested “22-23-24%”); as the documents then make clear, software revenues alone actually fell compared to the previous sequential quarter.

That’s a long way short of the $500m (which excludes any BBM revenues, which I don’t see happening in a hurry) that Chen is aiming for this year. Of course, if he can sell off – I mean license – lots of patents, then he could be on course for that target; the extra $70m from licensing helps. Multiply that by four (one big deal per quarter!) and you get $280m, so if the licensing people can keep hitting home runs, and everything goes fine, he might hit that $500m target, just.

But there’s no indication that the licensing revenues will keep coming; this might have been a $70m one-off. Or (as is also hinted) the company might just sell some patents, and count those in its “licensing” revenue.

But even that is a downscaling from expectations of a $600m annual software revenue, and the analysts all zeroed in on the sleight of hand in the earnings call. The stock selloff that has followed is clearly their reaction to what weren’t such good numbers after all.

• the sequential rise in US revenues (from $147m to $216m, or $69m) was mostly caused by the licensing deal. (This actually emerged in the earnings call.) According to BlackBerry’s execs, US revenues excepting the licence did grow, slightly; which means we can peg one licensing deal at just under $69m. That leaves the other licensing deal at somewhere around $1m – because the total extra from licensing was about $70m.

Soooo… you’ve got a handset platform (BB7) that people are abandoning at a remarkable rate, while they aren’t joining the new platform with any great alacrity. If things continue as now, by February 2016 there will be 15m BlackBerry users, and zero service revenue, and lossmaking handset revenue.

The saving grace is that the software is very profitable – about 84% gross margin. (This is in the annual 10K report published in March.)

So how does this look? If we have software revenues of about $125m, that generates $105m of gross profit (ie before expenses like R+D and keeping the lights on).

Now set against that the costs of the hardware business: it made a gross profit (by my calculations using the software profitability) of $13m on 1.1m sales. So everything’s rosy, right?

Unfortunately not – as Chen admitted, getting handsets to operating profitability (where you account for sales/general/administration and R+D) is much harder. By my calculation, allocating those costs in line with hardware revenues, the handset side hasn’t been operationally profitable since November 2011. I don’t think the handsets will ever come back to operating profit. Still, gross profit, eh?

If those costs stay the same, your mostly-software-and-a-few-handsets company has gross profit of $118m, and immediate costs of $313m – that’s a loss of $195m, before any other costs arising (such as amortisation or inventory writedown or debenture revaluation). And make no mistake, there will be other costs arising.

If BlackBerry holds on to its hardware business, it’s going to run into the sand. It’s also losing its old BB7 userbase extremely fast. John Chen doesn’t have much time to start generating revenue from licences and software. I’d expect to see some sort of crisis point in a couple of quarters. But then, BlackBerry is always in crisis. And nobody much seems to care, either.

6 thoughts on “BlackBerry might have no BB7 users left by February 2016 – and that’s a big, bad problem”