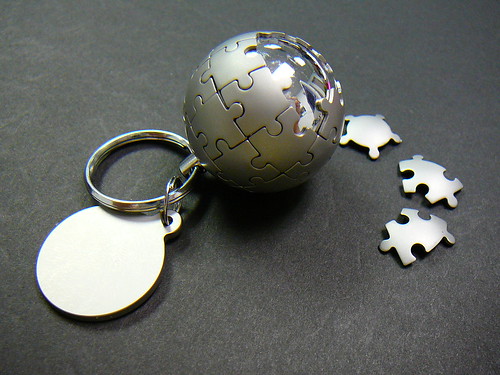 Wikipedia: missing pieces on mobile. Photo by @bastique on Flickr.

A selection of 8 links for you. They join things together. I’m charlesarthur on Twitter. Observations and links welcome.

After raising $1 million, the super-thin CST-01 watch won’t make it to Kickstarter backers » The Verge

The project has run into quite a few issues, but the broadest one is that the watches just aren’t easy to make. Little more than half of them are fully working after assembly, according to the two engineers behind CST-01, which means that the costs to make them are effectively doubled unless they can resolve the underlying issues. At this point, they can’t. As they explained in an earlier update, their project is basically out of money. One of their engineers supposedly went as far as sleeping in a van outside of the production factory so that he didn’t have to pay for a hotel.

Hristo Daniel Ushev, who worked at Motorola for eight years, on Gurman’s likely source, who he reckons is probably not an Apple employee:

It’s probably someone helping Apple with consumer research. I’m saying that because the leaked information concerns:

• “Considerations” (as far from a shipping product as a PowerPoint slide)
• Visible features, but no granular attributes (spec-level knowledge or software features)
• Price point variants
• Granular information from consumer research

Let’s combine these: a likely-external person, discussing feature “considerations”, without spec or software detail, about price point variants, and quoting granular information from consumer research. Based on that, I think it’s probably a low level employee (or attention-seeker) from a research firm that Apple trusted. The “considerations” may be features that appeared in a research aid.

Rings true. Takes nothing away from Gurman’s work in developing sources, of course.

One of the biggest threats it faces is the rise of smartphones as the dominant personal computing device. A recent Pew Research Center report found that 39 of the top 50 news sites received more traffic from mobile devices than from desktop and laptop computers, sales of which have declined for years.

This is a challenge for Wikipedia, which has always depended on contributors hunched over keyboards searching references, discussing changes and writing articles using a special markup code. Even before smartphones were widespread, studies consistently showed that these are daunting tasks for newcomers. “Not even our youngest and most computer-savvy participants accomplished these tasks with ease,” a 2009 user test concluded. The difficulty of bringing on new volunteers has resulted in seven straight years of declining editor participation.

In 2005, during Wikipedia’s peak years, there were months when more than 60 editors were made administrator — a position with special privileges in editing the English-language edition. For the past year, it has sometimes struggled to promote even one per month.

it should be noted that this was Chromium, the open-source version of Chrome. If somebody downloads the Google product Google Chrome, as in the prepackaged binary, you don’t even get a theoretical choice. You’re already downloading a black box from a vendor. In Google Chrome, this is all included from the start.

This episode highlights the need for hard, not soft, switches to all devices – webcams, microphones – that can be used for surveillance. A software on/off switch for a webcam is no longer enough, a hard shield in front of the lens is required. A software on/off switch for a microphone is no longer enough, a physical switch that breaks its electrical connection is required. That’s how you defend against this in depth.

Of course, people were quick to downplay the alarm. “It only listens when you say ‘Ok, Google’.” (Ok, so how does it know to start listening just before I’m about to say ‘Ok, Google?’) “It’s no big deal.” (A company stealth installs an audio listener that listens to every room in the world it can, and transmits audio data to the mothership when it encounters an unknown, possibly individually tailored, list of keywords – and it’s no big deal!?) “You can opt out. It’s in the Terms of Service.” (No. Just no. This is not something that is the slightest amount of permissible just because it’s hidden in legalese.) “It’s opt-in. It won’t really listen unless you check that box.” (Perhaps. We don’t know, Google just downloaded a black box onto my computer. And it may not be the same black box as was downloaded onto yours. )

Early last decade, privacy activists practically yelled and screamed that the NSA’s taps of various points of the Internet and telecom networks had the technical potential for enormous abuse against privacy. Everybody else dismissed those points as basically tinfoilhattery – until the Snowden files came out, and it was revealed that precisely everybody involved had abused their technical capability for invasion of privacy as far as was possible.

When Google is making Falkvinge look reasonable, it’s made a bad mistake.

(From April 2010:) Fast developing cameraphone technology will shortly make SLR system cameras and even professional cameras obsolete, the sales chief of the world’s top cellphone maker Nokia said on Tuesday. “They will in the very near future revolutionise the market for system cameras,” Anssi Vanjoki said in a speech in Helsinki.

“There will be no need to carry around those heavy lenses,” Vanjoki said, pointing to a professional photographer taking pictures of him.

The proliferation of smartphones with picture quality comparable to most pocket cameras has boosted photography around the world, but they have so far not challenged real system cameras due to phones’ smaller size and weaker technology.

Vanjoki said high-definition (HD) quality video recording was also coming to cellphones within the next 12 months.

Wasn’t wrong. Yet the other elements of the smartphone business were more important.

The Asia report: leading the shift from… » Flurry Insights Blog

Although we continue to see growth and user engagement in traditional app categories like Messaging & Social and Gaming, users in Asia demonstrated that in 2015, they are utilizing their smartphones and apps for more functional and practical purposes. This is indicated in the growth in the Shopping & Lifestyle and Utilities & Productivity app categories. Asia is the home of the phablet, and we see users have embraced this form factor- not only in terms of installed base but actual app usage. Just as the rest of the world is beginning to catch on to the phablet, only time will tell if we’ll catch up to Asia’s propensity to be productive and shop!

Smith is an iOS developer:

using the dataset I have from my Audiobooks app I took at look at how many of my customers have enough space for the upgrade.

The result was pretty promising.

66% of my customers on eligible devices have at least 1.3GB of free space. This compares to just 37% of users who would have immediately had sufficient space at the old iOS 8 requirement.

The distribution of eligible devices breaks out roughly as you’d expect for the various capacities Apple sells: 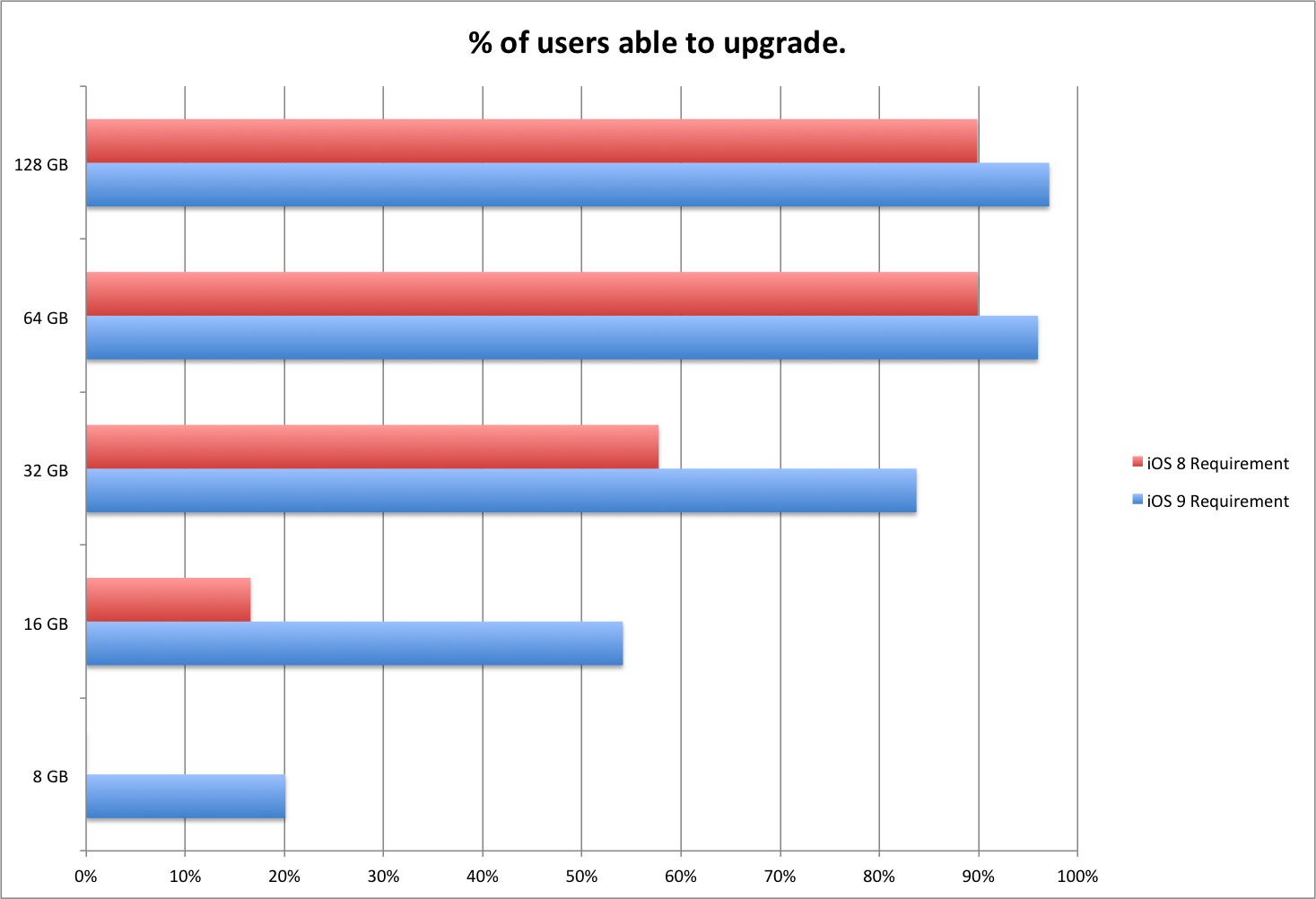 The rate for the 16GB devices (54%) is higher than I would have initially feared. The 16GB capacity accounts for 58% of devices, so it is vitally important that its users have the ability to upgrade.

This reduction in the space requirement (and other things Apple is doing on this front) make me think iOS 9 adoption to be even faster than iOS 8’s.

Google Inc launched a free version of its music streaming service on Tuesday, as it sought to upstage the debut of Apple Inc’s rival service next week.

Google Play Music has offered a $9.99 per month subscription service for two years but Tuesday’s launch is the first free version of the streaming service. It is available online and will be available on Android and iOS by the end of the week, Elias Roman, Google product manager, said.

Apple said earlier this month it would launch a music streaming service on June 30 for $9.99 per month along with a $14.99 per month family plan, with a free three-month trial.

As with other streaming services, such as Spotify and Rhapsody, Google Play Music curates playlists. Users can tailor playlists based on genre, artist or even activity, such as hosting a pool party or “having fun at work.”

“We believe this is a play that will expose a lot of people to the service,” Roman said in an interview.

Here’s the official announcement. What I find really weird is that Google, the high priests of “let machines do it”, is highlighting the human-curated nature of these playlists.

1 thought on “Start up: Kickstarter disappointment, the Apple leaks source?, Google is listening, and more”