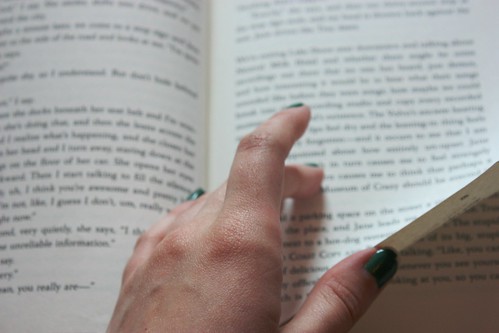 Another micropayment from Amazon! Photo by Amanda Emilio on Flickr.

In contrast to the iOS industry statistics, the Android landscape is much more fragmented, with dozens of manufacturers and thousands of devices on the market. We’ve put together four charts to help illuminate the situation:

The one for phone manufacturers is eye-opening, to say the least. Worth bookmarking. (Via Daniel Tello.)

BlackBerry’s Classic moment, or not » WSJ

Two things could leave the market pleasantly surprised on Tuesday. One would be an announcement that BlackBerry is distancing itself from handsets, devoting more resources to software. The other would be if that latter business shows signs of meeting some ambitious revenue targets laid out by chief executive John Chen.

A hopeful sign on software sales would affect the share price far more than if BlackBerry’s loss for the period through May was better than the 5 cents a share projected by analysts. They see BlackBerry reporting software and support revenue of $83m for the quarter, up from $56m a year earlier. The company wants to more than double the annual figure in fiscal 2016 to $500m and to produce operating profits on a sustained basis. That would come as services revenue continues to shrivel, falling by about half this fiscal year.

I’ll post my own forecast for BlackBerry’s results an hour or two after this post goes live. (These days people write about BlackBerry almost as a curio; it’s the Crimea of the smartphone wars.)

In line with the government’s commitment to free data, Companies House is pleased to announce that all public digital data held on the UK register of companies is now accessible free of charge, on its new public beta search service.

This provides access to over 170 million digital records on companies and directors including financial accounts, company filings and details on directors and secretaries throughout the life of the company.

Free access to the data is available both through a web service and an application program interface (API), enabling both consumers and technology providers to access real time updates on companies.

Fabulous. Back in 2006, the pricing was opaque and redacted.

These hackers warned the Internet would become a security disaster. Nobody listened. » The Washington Post

Your computers, they told the panel of senators in May 1998, are not safe — not the software, not the hardware, not the networks that link them together. The companies that build these things don’t care, the hackers continued, and they have no reason to care because failure costs them nothing. And the federal government has neither the skill nor the will to do anything about it.

“If you’re looking for computer security, then the Internet is not the place to be,” said Mudge, then 27 and looking like a biblical prophet with long brown hair flowing past his shoulders. The Internet itself, he added, could be taken down “by any of the seven individuals seated before you” with 30 minutes of well-choreographed keystrokes.

The senators — a bipartisan group including John Glenn, Joseph I. Lieberman and Fred D. Thompson — nodded gravely, making clear that they understood the gravity of the situation. “We’re going to have to do something about it,” Thompson said.

What happened instead was a tragedy of missed opportunity, and 17 years later the world is still paying the price in rampant insecurity.

In the coming weeks we’ll put up a web form people can use to submit these requests to us, and we’ll update this blog post with the link.

Soon, the maker of the Kindle is going to flip the formula used for reimbursing some of the authors who depend on it for sales. Instead of paying these authors by the book, Amazon will soon start paying authors based on how many pages are read—not how many pages are downloaded, but how many pages are displayed on the screen long enough to be parsed. So much for the old publishing-industry cliche that it doesn’t matter how many people read your book, only how many buy it.

For the many authors who publish directly through Amazon, the new model could warp the priorities of writing: A system with per-page payouts is a system that rewards cliffhangers and mysteries across all genres. It rewards anything that keeps people hooked, even if that means putting less of an emphasis on nuance and complexity.

So, basically, book streaming? Is Taylor Swift going to come to their aid? Or is it just an encouragement to write books at a length that people want to read? I think every author would like to know where people gave up on their books, if they didn’t finish them. Though that might not be the point at which they stopped being interested.

Your plan not to compensate independent labels during the three-month trial period leads to the assumption that you don´t respect the music of independent artists or the work their partners do. It is obvious that this will reduce the overall income for independent artists and labels significantly at a time when many depend on every cent for survival.

Clearly what VUT needed was to rename itself “Taylor Swifte” or something. Or perhaps this was just another outgrowth of the ire felt among independent musicians. Apple Music (or more accurately the move to streaming and away from downloads) is going to cause yet another earthquake in the industry, rather like when CDs stopped being big.

When we look at what it would take for Samsung to come up with its own mobile OS, the first thing to note is that “operating system” is a misnomer. Surely, iOS and Android are operating systems in the old-school “kernel” sense: They manage drivers, memory, input and output streams, user tasks, and the like. But today, an “operating system” is much more than just a kernel, it includes rich frameworks that support a wide range of applications, games, maps, social networking, productivity, drawing… Building these frameworks is a much harder task than adapting a Linux kernel.

And the OS is just the beginning. What Samsung really wants is its own ecosystem, a set of services that will ensure its autonomy, growth, and lasting importance. It wants its own app store, maps, music/video, cloud storage…

How long would it take for Samsung to build all of this? Three years, four years? Add to this the difficulty of “skating to where the puck will be”, to divine where the industry will land four years from now.

Samsung hasn’t been much good at building an ecosystem, either: look at all the content companies it has bought and then dumped, or services (ChatOn) it has started and stopped.