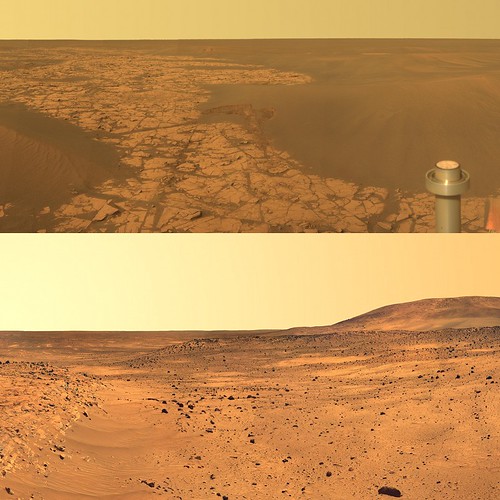 Mars: likely to remain inhabited only by robots for quite a long time yet. Photo by ridingwithrobots on Flickr.

The Samsung Galaxy S6 might be the best Android phone of 2015, but it is unusable » Android Beat

The Moto X 2014, which has 2GB of RAM, has around 700MB of free RAM with a similar setup. Despite the 1GB difference in RAM, the Moto X — running Android 5.1 — feels significantly smoother to use. The RAM management issue on the Galaxy S6 is so bad that jumping between a Chrome tab and another app running will force the Chrome tab to reload. This makes the phone completely useless for any kind of serious browsing or for doing any transactions through a bank’s website. I have to restart my Galaxy S6 once every 24 hours to make sure the handset does not feel sluggish and slow. On the days that I do forget to reboot the handset, the phone gets so slow that it feels like I am using some low-end Android device and not the best Android handset in the market currently. It’s nothing short of a miracle that I have not yet thrown the phone in sheer frustration. In all probability, the poor RAM management of the Galaxy S6 stems from different memory leaks present in Android 5.0 Lollipop. The Moto X and Nexus devices had similar issues on Android 5.0, so it makes sense that the Galaxy S6 has them as well. However, the Galaxy S6 was released more than 5 months after Google had released Lollipop, which means that Samsung had more than ample time to track down and fix the memory leaks.

I’ve previously linked to the complaints about Lollipop having memory leaks. I haven’t seen this complaint before, though.

The Apple vs. Google battle has changed » Above Avalon

Google I/O made it clear that Google needs Apple and iOS. To ignore such a vibrant base of highly-engaged users, especially when other companies like Facebook enjoy a prominent place in the platform, would be highly destructive to Google’s ambitions. On the other hand, Apple also needs Google as its services remain very popular among iOS users. However, judging from Apple’s prior actions and mission statement to personalize technology, I would expect Apple will continue to try to minimize its dependence on Google as such a situation represents a long-term threat to Apple’s mission. Similar to how the Nexus experience provides the closest thing to pure Android, I suspect Apple wants to continue down the path of being in a position to ship an iPhone and suite of apps and services that make it possible to live within the Apple ecosystem without much interference from Google. While most consumers will end up settling somewhere in the middle, using both Apple and Google products and services, it is this quest to control the entire user experience that ultimately validates the competition between Apple and Google as genuine. The probability of a world where Android excels as a direct result of iOS faltering is becoming more remote as time goes on. Instead, Google is becoming more reliant on a healthy iOS platform…

Last week we ran some fascinating maps [Alasdair Rae] created showing the population density (and, consequently, urban area) of major British cities. Now, he’s created a visualisation that shows the limits of this type of static density modelling: an animation that shows the massive population shift that takes place every day as workers commute into the City of London. The visualisation is based on 2011 census data showing daily commuter journeys into the square mile, London’s main financial distract. It shows commuters speeding into the city’s centre from as far away as Bournemouth and Margate. It’s also completely hypnotic to watch:

Now I want the commute home too…

[Embedded software expert Michael] Barr testified: “There are a large number of functions that are overly complex. By the standard industry metrics some of them are untestable, meaning that it is so complicated a recipe that there is no way to develop a reliable test suite or test methodology to test all the possible things that can happen in it. Some of them are even so complex that they are what is called unmaintainable, which means that if you go in to fix a bug or to make a change, you’re likely to create a new bug in the process. Just because your car has the latest version of the firmware — that is what we call embedded software — doesn’t mean it is safer necessarily than the older one….And that conclusion is that the failsafes are inadequate. The failsafes that they have contain defects or gaps. But on the whole, the safety architecture is a house of cards. It is possible for a large percentage of the failsafes to be disabled at the same time that the throttle control is lost.” Even a Toyota programmer described the engine control application as “spaghetti-like” in an October 2007 document Barr read into his testimony. Koopman was highly critical of Toyota’s computer engineering process.

Remember how shonky the interfaces for VCRs and DVDs were? What if the people who did those were writing your car code? What if they already are?

Job Summary The Maps team is looking for a web technology expert to help make maps work seamlessly on the web. The ideal candidate will be a JavaScript expert, have in- depth knowledge of various core web technologies, and be proficient with web developer tools for debugging and performance analysis.

If you have an iOS device and use iCloud.com, you can use Apple Maps online to do Find My iPhone. Either Apple is looking to expand its desktop Maps so that it’s not just an OSX experience, or this is just strengthening the FMI team.

Mars One reveals true number of applicants » Matter on Medium

On a new page on its site, The Science of Screening Astronauts, Mars One writes, “The total number of completed and submitted applications was 4,227.” Citing a report by NBC, Matter reported the figure of publicly available video applications at 2,782. We don’t know that 4,227 is any more real than 200,000. It’s just what they’re self-reporting. (Mars One did not provide us any clarification despite repeat queries.) Regardless, that falls far short of the 200,000 widely reported initially by countless media outlets, and shorter yet of the one million applicants CEO Bas Lansdorp anticipated at the launch of the project.

Why SamsungPay is toast » Starpoint Blog

Tom Noyes (who – reminder – called it correctly that the iPhone 6 would have NFC and payments back in May of 2014):

Let’s assume that Samsung solves ALL of the technical issues above and now SamsungPay works on all Android devices. Everyone knows that MNOs decide what gets pre-installed on the phones they subsidize (even Apple). Six weeks before Mobile World Congress [in March], Google made a strategic deal with the US MNOs to buy ISIS in exchange for Android Pay (the new Google wallet) becoming part of Google Mandatory Services (GMS.. just like search and gmail). Part of this is also a new android registration flow that addresses THE KEY weakness of Android profitability.. it gets consumers to add a card and play account (Apple brilliantly required an iTunes account… with accompanying credit card.. in launch of iPhone). Samsung’s wallet could still work.. however IT IS NOT PRE LOADED.. so this is what the consumer would have to do (AFTER REGISTERING FOR ANDROID PAY): 1) Find out about Samsung pay
2) Install Samsung Pay
3) Register for Samsung Pay
4) Understand where they can use Samsung Pay
5) Wave it near the Mag Head reader
6) Then use Android pay for in-app and play purchases..
Forget about the technical issues.

But it can attempt it in other countries.

Sizing up the opportunity for Apple Pay » Kantar

Among iPhone 6 and 6 Plus owners in the US, 13% have used Apple Pay, and 11% are planning to do so. Lack of trust and knowledge do not play a major role as reasons not to use it. Only 2.6% said they did not use Apple Pay because they do not trust it, and only 4.1% said they did not use it because they do not understand how it works. Eleven percent said they did not use it because their credit cards work just fine, and 58% just answered “no” without adding any more detail. Among Apple Pay users, men were more numerous than women, with 59% versus 41% of users, and 55% versus 45% of intenders. This is not surprising since early adopters tend to skew male, but what is interesting is that adoption of the new iPhone models has been slightly stronger among women at 52% versus 48% for men… …In March 2015, as a measure of comparison, only 7% of Android users we surveyed in the US said they used NFC/mobile payment. Google Wallet has been around since 2010, and any Android device with NFC capability can access it for payments.

Three Google compensation committee members were re-elected on Wednesday, the technology company said at its annual meeting, despite a challenge from a high-profile proxy adviser that raised concerns over executive pay. Google did not immediately detail by how much of a margin the directors won re-election at the meeting, which was webcast. Proxy adviser Institutional Shareholder Services (ISS) had recommended that Google shareholders withhold votes for the three directors, saying “mega grants” provided to executive chairman Eric Schmidt and chief business officer Omid Kordestani were “problematic.” ISS recommended that votes be withheld for Google compensation committee members John Doerr, Paul Otellini and Ram Shriram. ISS also recommended investors withhold votes from Google director John Hennessy, president of Stanford University, citing what it said is his role as a non-independent member of the board’s nominating committee.