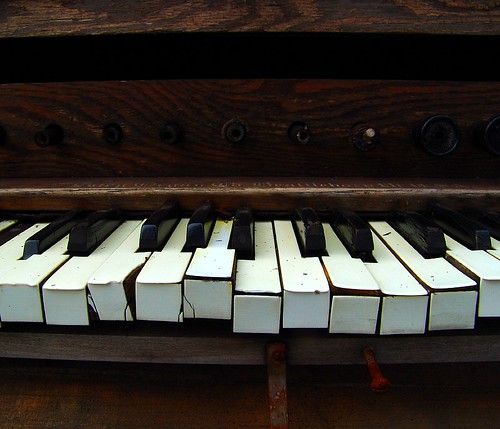 That’s another sort of third-party keyboard altogether. Photo by zen on Flickr.

A selection of 7 links for you. They are. I’m charlesarthur on Twitter. Observations and links welcome.

Because Starbucks isn’t answering specific questions about the fraud, I cannot confirm precisely how it works, but I have informed speculation, based on conversations with an anonymous source who is familiar with the crime. The source said Starbucks was known to be wrestling with the problem earlier this year. Essentially, any criminal who obtains username and password credentials to Starbucks.com can drain a consumer’s stored value, and attack their linked credit card.

Hackers often manage to steal hordes of username and password combinations, the way they steal databases of credit card account numbers. Because consumers often re-use credentials, hackers take them and “brute force” thousands of potential logins at the website. Because Starbucks’ mobile payment app is so popular, any large set of stolen credentials is bound to have at least a few combinations that unlock Starbucks accounts.

Perhaps you’re wondering: what’s the use of hacking the Starbucks app? Answer, as a wilier mind than mine pointed out: you can buy Starbucks gift cards at the counter with them. Then you sell them on eBay. (Though I can’t decide if this is pretty small-time crookedness or a huge line of business. Certainly going to be inflating Starbucks’s bottom line though.)

“What is this a picture of?” Humans can usually answer such questions instantly, but in the past it’s always seemed out of reach for computers to do this. For nearly 40 years I’ve been sure computers would eventually get there — but I’ve wondered when.
I’ve built systems that give computers all sorts of intelligence, much of it far beyond the human level. And for a long time we’ve been integrating all that intelligence into the Wolfram Language.
Now I’m excited to be able to say that we’ve reached a milestone: there’s finally a function called ImageIdentify built into the Wolfram Language that lets you ask, “What is this a picture of?”— and get an answer.

“HomeKit [hardware certification] has been available for just a few months and we already have dozens of partners who have committed to bringing HomeKit accessories to market and we’re looking forward to the first ones coming next month,” said Apple spokeswoman Trudy Muller.

Apple’s statement comes on the heels of a report in Fortune that said Apple’s software platform — which will allow the company’s devices to control connected home appliances — was experiencing problems and that the introduction of the first HomeKit devices were being delayed.

For its part, Apple has never said when HomeKit-compliant devices would start hitting the market, but one developer working with Apple on the platform had told Re/code earlier this year that new products would be ready in May or June.

Interesting: Apple moved quickly to respond to this – within hours – and chose the WSJ to say it.

In January 2015, the Welsh drone startup concluded its Kickstarter campaign to fund production of the Zano. It raised over £2.3m ($3.4m) in under two months, becoming the most crowdfunded European project ever. This summer, Torquing [Group, which is making the device] says it will ship drones to the more than 12,000 people who backed the project.

There’s only one problem. Despite Zano’s release date being less than two months away, no one outside Torquing has actually flown the drone. And it’s questions about the project that are truly beginning to take off.

Ars visited Torquing last month for an exclusive tour of the company’s offices. After spending a couple of hours with the Zano team, we don’t have a good sense of how well the device actually flies. Although we heard more about its touted “swarm” feature, we didn’t see the drone working in a real-world situation; we were merely able to hold a Zano and verify its existence.

Reece Crowther, the company’s head of marketing, regretfully informed us that we turned up just before a shipment of 500 last-minute prototypes arrived. Torquing, therefore, said it was unable to let us fly one. At the time, Reedman noted that only 12 Zanos existed, and we saw what appeared to be only a few of them.

I’m one of the backers. Fingers crossed. I’d expect this to be late, at best.

When I first tried Meet, Sunrise’s latest addition to their popular calendar app, I didn’t think it made much sense as a custom keyboard. Now, a few months later, Meet has become my favorite way to check on my availability from any app and create one-to-one meetings. With Meet, the Sunrise team has created one of the most innovative mobile calendar features I’ve seen in years.

Sunrise, part of Microsoft since February, rarely shied away from subverting traditional calendar features found in most clients for smartphones and tablets. As I explored last year, Sunrise’s biggest strengths lie in excellent integration with web services, prolific use of icons to quickly discern events, weather support, external calendars, and the ability to show details for event participants. At its core, Sunrise aims to reimagine the calendar by expanding it beyond a list of days and events

Ina Fried on a company that’s not exactly making a smartphone; it’s making the camera systems to go into them:

Put more simply, Light tries to emulate digitally what a big zoom lens does through expensive glass lenses. It aggregates the data from the different cameras to create both optical zoom and high-resolution images. Light has applied for a bunch of patents to cover aspects of its approach, including creating zoom using images from the multiple fixed-focal length lenses.

As a business, Light is banking on the fact that using smartphone cameras, even a bunch of them, is a far more economical way to achieve the kind of images that in the past have required expensive glass lenses.

The technology is ready, says Grannan, who previously ran start-up Vlingo and also worked at Sprint PCS. There is of course, added cost in putting a bunch of cameras and mirrors inside a cell phone, an addition of perhaps $60 to $80 in the final cost of a phone, Light estimates.

Seems high. Creating a big lens from smaller ones is a solved software problem: it’s how the Very Large Array works, for example. Wonder if this is really a defensible USP.

Why I’m breaking up with Google Chrome » The Next Web

Owen Williams, on a topic I previously linked to:

The Verge reported that using Chrome over Safari resulted in a three and a half hour shorter battery life on the latest MacBook.

I’ve always loved Chrome’s interface, its plethora of extensions, and how it integrates with services every day, but it’s time for something new. We can do better.

The problem is that the Web is now optimized for Chrome users and that means alternatives often provide a terrible experience.

Thanks in part to the browser’s massive market share, the best developer tools and Google’s aggressive adoption of the latest Web technologies, developers have gravitated toward Chrome’s rendering engine as the only one they support.

I’ve switched to Safari (on a Mac), and found that yes, processor use plummets and battery life extends dramatically. Nor is it noticeably slower (or faster).

But the important point here is in the third paragraph of this excerpt: that lots of sites are now using Chrome-specific tweaks, which means that they don’t work as well in other browsers, at least on the desktop.

This does pose a problem if it becomes dominant in mobile: Android isn’t going away, and Chrome is increasingly the default browser on mobile too.