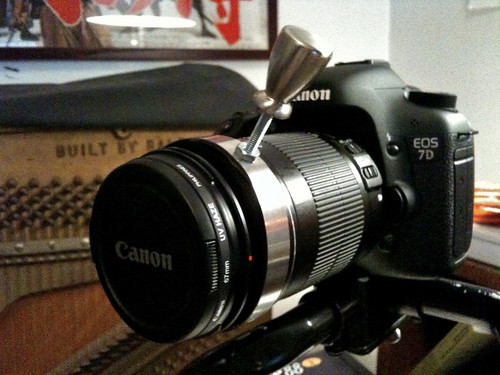 Not so many of these being sold. Photo by lonelysandwich on Flickr.

A selection of 8 links for you. Perhaps. I’m charlesarthur on Twitter. Observations and links welcome.

Have a play with this excellent site, which shows financial data for all sorts of companies. Notable: iPhone sales in the just-gone quarter of 61.2m, up 39.9%. That really is a lot. And the revenues too.

Eliminating simulator sickness is a major interest of the burgeoning VR industry, but so far there hasn’t been a clear answer. Home remedies include drinking alcohol, while companies like Oculus Rift are exploring better positional tracking and improved display resolution. But researchers at Purdue University believe they’ve found a way to reduce the negative physical effects of virtual reality by using something that’s right in front of your face.

“We’ve discovered putting a virtual nose in the scene seems to have a stabilizing effect,” says David Whittinghill, an assistant professor in Purdue University’s Department of Computer Graphics Technology.

Windows Phone and Prepaid in the US » Tech.pinions

based on the combination of AdDuplex and Comscore data, it’s likely Cricket has between 1 and 1.5 million Windows Phone devices in its base, which is a fairly significant chunk of Cricket’s overall base, perhaps as much as 25%. Secondly, remember the overall Windows Phone growth numbers we looked at earlier? There was net growth of about 1 million Windows Phone handsets in the base during that same nine month period or, in other words, the difference between those that left the platform and joined it was 1 million. Given Cricket likely added around 1 million during that period, it’s possible it accounted for the vast majority of that net growth.

Cricket isn’t the only prepaid brand where Windows Phone is big, though. It’s hard to get a full postpaid/prepaid breakdown from the AdDuplex numbers because, for the major carrier brands, the two aren’t separated. But even if we just focus on MetroPCS, Cricket and a phone only available on AT&T’s GoPhone prepaid service, these three add up to around 40% of the total base in the US. Add in a few percentage points for other prepaid sales on the major carriers and we could be getting close to half the Windows Phone base on prepaid, compared with about 25% of the total US phone base on prepaid. In this sense, Windows Phone is the anti-iPhone, with the iPhone well underrepresented in the prepaid market, just as Windows Phone is well over-represented.

(The full article is via subscription – monthly or one-off.)

Sim City lets you indulge your wildest fiscal fantasies. Banish the IRS and set taxes to zero in Teapartyville, or hike them to 99 percent on the filthy rich in the People’s Republic of Sims. Either way, you will discover that the game’s economic model is based on the famous Laffer Curve, the theoretical darling of conservative politicians and supply-side economists. The Laffer Curve postulates that raising taxes will increase revenue until the tax rate reaches a certain point, above which revenue decrease as people lose incentive to work.

Finding that magic tax point is like catnip for hard-core Sim City players. One Web site has calculated that according to the economic model in Sim City, the optimum tax rate to win the game should be 12% for the poor, 11% for the middle class and 10% for the rich.

In other words, playing Sim City well requires not only embracing supply-side economics, but taxing the poor more than the rich. One can almost see a mob of progressive gamers marching on City Hall to stick Mayor McSim’s head on a pike.

The subtle reinforcing effects of such models isn’t much thought about. Philip K Dick did, for his short story War Game.

Profit at the world’s largest camera maker fell to 33.93bn yen (£188 million) in January-March, compared with the 53.64bn yen average estimate of 5 analysts according to Thomson Reuters data.

The result comes as the world’s No.1 camera maker contends with a shift in consumer preference toward increasingly capable smartphone cameras. That shift has dragged Canon’s compact sales down nearly 70% since the market’s peak in 2008 – the year after Apple released its game-changing iPhone.

“Sales volume for low-end (digital camera) models declined due to the ongoing contraction of the market in all regions from the previous year,” said Canon in its earnings release.

Revenues down 1% year-on-year; operating profit by 20%. Also cut this year’s forecasts for compact sales by 23% and for higher-end cameras by 9%.

LG Electronics will release its latest smartphone, the G4, on Wednesday and seek to steal customers from its bigger rivals Samsung Electronics and Apple. LG is betting big on the new smartphone to gain fresh momentum in its earnings.

However, it faces a bigger obstacle than Samsung and Apple in the domestic market ― the Telecom Act that caps handset subsidies.

Two weeks ago, the KCC [Korean Communications Commission] raised the maximum amount of subsidy that customers can receive when buying a new handset to 330,000 won [£203/$304], from 300,000 won [£185/$268]. However, the maximum subsidy is possible only for those who choose the highest monthly phone bill rate. For most consumers, the actual subsidies available for them are insignificant. That’s why they are not buying new handsets.

The government has drawn criticism for the enforcement of the Telecom Act from all interested parties, including consumers, telecom companies and retail shop operators.

In particular, retail handset dealerships have condemned the act as their handset sales plunged after the Mobile Distribution Act took effect in October. Under the current law, when consumers buy Samsung’s Galaxy S6 and select a highest phone bill rate, they can receive up to 330,000 won in subsidies.

Normally, retail shop owners get rebates from telecom companies when they sell new handsets, but if customers do not buy the devices at the shop, the owners will not get the rebate.

Besides, if customers cancel their contracts before six months, the shop owners have to pay a 200,000 won [£123/$184] penalty to the telecom companies.

This probably explains the low reported sales of the Galaxy S6. The purpose of the subsidy cap is to prevent carriers and handset makers colluding to lure customers from rivals in South Korea’s saturated market. In 2014, Samsung lobbied to raise the subsidy ceiling. Not hard to work out why.

Racist Camera! No, I did not blink… I’m just Asian! » Flickr

Jared Earle offered a followup to the story on Kodachrome from Monday, pointing to this photo and commentary from 2009:

We got our Mom a new Nikon S630 digital camera for Mother’s Day and I was playing with it during the Angels game we were at on Sunday.

As I was taking pictures of my family, it kept asking “Did someone blink?” even though our eyes were always open.

Surprising, to say the least, that Nikon would have this problem.
Time picked up the story about a year later, and pointed out more strange examples where systems seemed to have built-in prejudices.

Of course, you can blame “the algorithms”. But they don’t write themselves.

Luke Wroblewski, on how using menu controls (especially “hamburgers” and similar) can create big problems, even though the screen looks “simpler” (and so “better”, right?):

In an effort to simplify the visual design of the Polar app, we moved from a segmented control menu to a toggle menu. While the toggle menu looked “cleaner”, engagement plummeted following the change. The root cause? People were no longer moving between the major sections of the app as they were now hidden behind the toggle menu. 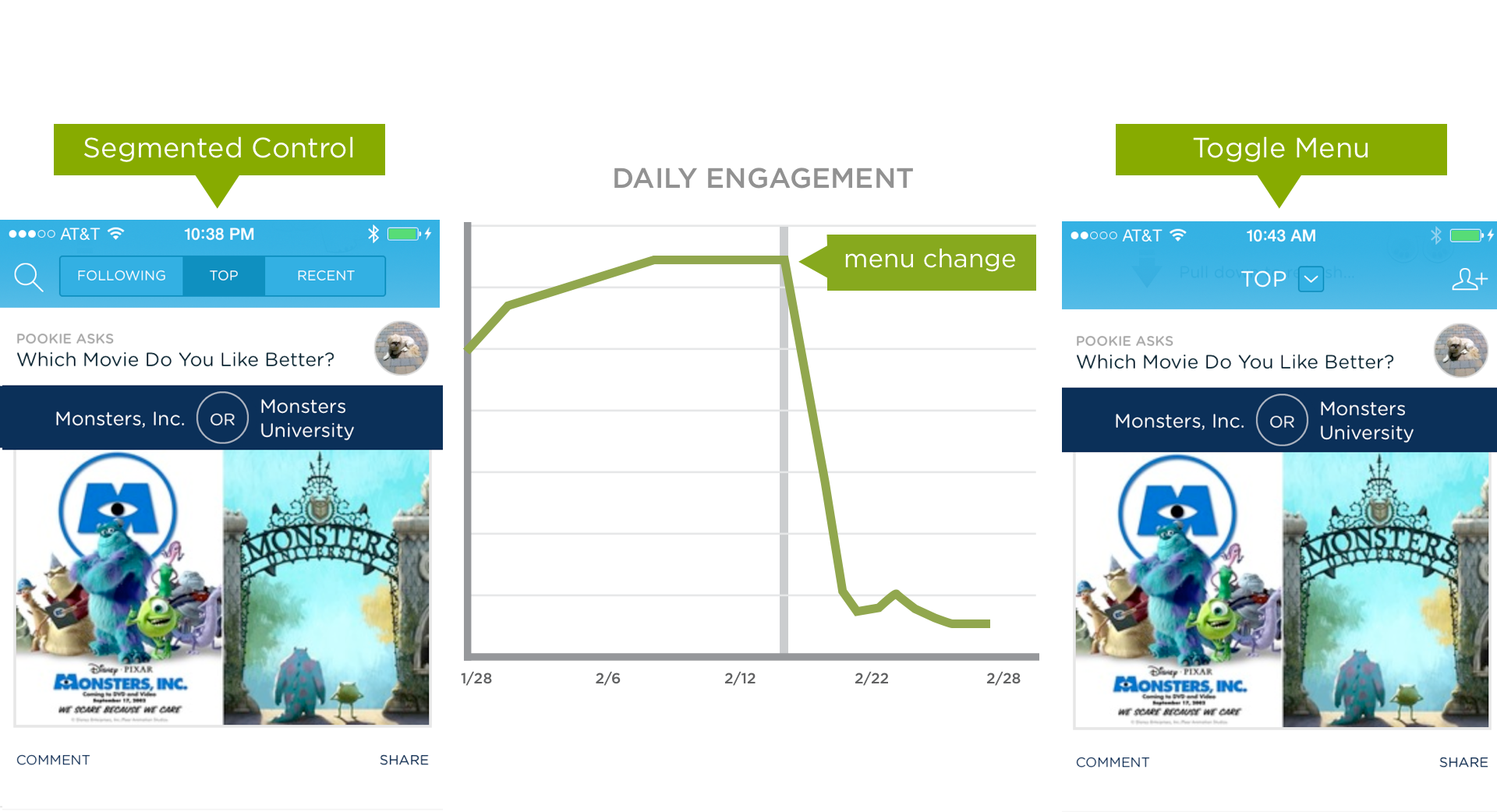 A similar fate befell the Zeebox app when they transitioned from a tab row for navigating between the major sections of their application to a navigation drawer menu. Critical parts of the app were now out of sight and thereby out of mind. As a result, engagement fell drastically.

[By contrast] When critical parts of an application are made more visible, usage of them can increase. Facebook found that not only did engagement go up when they moved from a “hamburger” menu to a bottom tab bar in their iOS app, but several other important metrics went up as well.