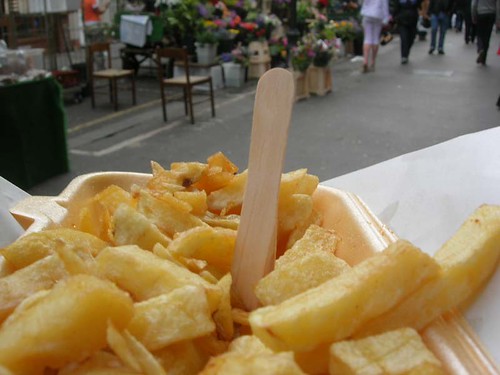 No, adding these chips won’t make you smart. Less hungry, maybe. Photo by malias on Flickr.

A selection of 8 links for you. Spread them like butter from the fridge. I’m charlesarthur on Twitter. Observations and links welcome.

Gabor and Patrick, who founded the audio-based software company:

Even though music apps make up only 3% of all downloads in the iOS App Store, the Music app category is the 3rd highest revenue generating app category after Games and Social Networking. Which suggests that music apps monetize disproportionately well on platforms that offer low latency performance such as the App Store/iOS devices.
On Android, it is a different story. In the Google Play store, the Music category is not even a top five revenue producing app category.

The overwhelming majority of Android devices suffer from too high audio latency, preventing developers from building apps that would satisfy consumer demand on Android.

As such, Google and Android app developers are leaving billions of dollars on the table for Apple and iOS developers because of Android’s 10 Millisecond Problem.

For the purposes of this explainer, roundtrip audio latency is simply the difference in time between when an audio input is introduced into a mobile device, undergo some sort of needed processing, and exits the same device. As any musician will tell you, we as humans are most comfortable with latencies of ~10 milliseconds. Anything significantly higher tends to disturb us.

Most Android apps have more than 100 ms of audio output latency, and more than 200 ms of round-trip (audio input to audio output) latency. To give you a quick example from the Oscar winning film Whiplash, it’s like the drummer is dragging by a half beat behind the band!

This has been a problem on Android for years; the analysis suggests it may be insoluble. (List of latencies here; some are really long.) The discussion on Hacker News is worth browsing too. (Via Benedict Evans.)

The story behind Jar’Edo Wens, the longest-running hoax in Wikipedia history » The Washington Post

On Monday night, [Gregory] Kohs [a former Wikipedia editor who is now a prominent critic] wrapped up an experiment in which he inserted outlandish errors into 31 articles and tracked whether editors ever found them. After more than two months, half of his hoaxes still had not been found — and those included errors on high-profile pages, like “Mediterranean climate” and “inflammation.” (By his estimate, more than 100,000 people have now seen the claim that volcanic rock produced by the human body causes inflammation pain.)
And there are more unchecked hoaxes where those came from. Editors only recently caught a six-year-old article about the “Pax Romana,” an entirely fictitious Nazi program. Likewise “Elaine de Francias,” the invented illegitimate daughter of Henry II of France. And the obvious, eight-year-old hoax of “Don Meme,” a Mexican guru who materializes at parties and mentors hipster bands…

…“I think this has proved, beyond a reasonable doubt, that it’s not fair to say Wikipedia is ‘self-correcting,’” Kohs said.

It was just a dumb thing. Then we put a chip in it. Now it’s a smart thing.

Such as for example these socks:

Ashlee Vance, with an extract from a forthcoming book:

“The word of mouth on the [Model S] car sucked,” Musk says. By Valentine’s Day 2013, Tesla was heading toward a death spiral of missed sales targets and falling shares. The company’s executives had also hidden the severity of the problem from the intensely demanding Musk. When he found out, he pulled staff from every department — engineering, design, finance, HR — into a meeting and ordered them to call people who’d reserved Teslas and close those sales. “If we don’t deliver these cars, we are f—ed,” Musk told the employees, according to a person at the meeting. “So I don’t care what job you were doing. Your new job is delivering cars.”
Musk fired senior executives, promoted hungry junior employees, and assigned former Daimler executive Jerome Guillen to fix Tesla’s repair service and get its glitchy cars back on the road. He also proposed what eventually became his public guarantee of the resale price of the Model S: Unsatisfied buyers would get their money back from Musk personally if they couldn’t sell their car at a price comparable to that of another luxury model.

When in charge at Microsoft, Bill Gates used to insist that executives bring him at least one piece of bad news along with any good news. This is what happens when they don’t. Good on Musk getting the turnaround to happen through such a resourceful approach, though. Ah, but what might have been for Google.

In a draft of the Commission’s strategy for creating a digital single market, seen by Reuters, it says it will “carry out a comprehensive investigation and consultation on the role of platforms, including the growth of the sharing economy.”
The investigation, expected to be carried out next year, will look into the transparency of search results – involving paid for links and advertisements – and how platforms use the information they acquire.

European Commission Vice-President Andrus Ansip is expected to formally announce the new strategy on May 6.

The transparency of search results came under particular scrutiny this week when the European competition chief accused Google of cheating competitors by distorting web search results to consistently favor its own shopping service.

There are concerns in Europe over how Internet companies such as Facebook and Amazon use the huge amounts of personal data they acquire.

The inquiry will also look at how platforms compensate rights-holders for showing copyrighted material and limits on the ability of individuals and businesses to move from one platform to another.

Don’t hold your breath for when this will report, though, or whether any of it will be implemented.

Shipments of smartphones by China-based vendors declined by nearly 30% sequentially to 91.8m units in the first quarter of 2015 due to sluggish demand both at home and overseas, as well as reduced production affected by the traditional Lunar New Year holidays, according to Digitimes Research.
Vendors which have a high ratio of export sales saw their shipments decline by over 40% sequentially in the first quarter, and those which focus more on the domestic market suffered declines ranging from 20-25%, Digitimes Research has found.

Huawei’s shipments were less affected by market factors, reaching 13.5m units in the first quarter and making the company the number vendor in the quarter. Xiaomi came in second with shipments totaling 10m units as it lowered the prices of some old models to boost sales.

Of course sequential changes don’t matter when you’re trying to analyse larger trends, but they hurt Digitimes’s intended audience of supply chain companies. That’s quite a drop; usually total worldwide mobile phone sales drop by about 10% from Q4 to Q1.

Instagram, which built a billion-dollar business on smartphones, is making its first foray into wearable technology with a new app for the Apple Watch.
The popular photo-sharing app, which is owned by Facebook, will use the smartwatch to help users keep up with their closest friends through alerts as soon as they post a picture…
…“I think the Watch is really about quick information and notifications,” [Instagram designer Ian] Silber told the Financial Times. “It’s a huge use case that’s going to be a little bit different.”

So there’s going to be a version for a device that has only just launched, while the Windows Phone version hasn’t been updated for over a year. The power (or lack of it) of an ecosystem.

Kneeland nails the point that I also made: that just because app developers can write once for any Windows version (phone, PC, Xbox) doesn’t mean they will:

The value of a universal app is that you could write an app and have it easily working on all Windows platforms. If I had a bank app, an airline booking app, a casual game, or another app I was already planning on making for PCs, then sure, the idea of universal apps makes sense…
But what good is a Lyft app on a desktop? What good does the Luxe parking app do on my Xbox? What would Instagram even do on my ThinkPad? How could I use a barcode scanning price comparison app on a PC tethered to my desk? Is a PC going to count my steps or monitor my heart-rate in real-time? Can it help me navigate traffic with Waze? What good is a Starbucks card app (or any store app, or any mobile payments solution for that matter) going to do on a device that isn’t mobile? Heck, what would Grindr do if limited to a desktop—find romantic leads within my specified IP address blocks?