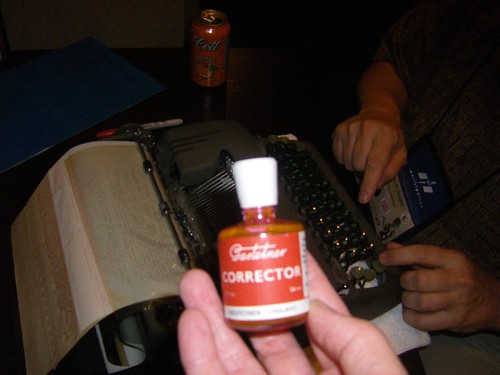 This is how we used to write and correct “blogposts”, kids. Photo by Julie McGalliard on Flickr.

A selection of 10 links for you. For free! I’m charlesarthur on Twitter. Observations and links welcome.

Electric vehicle (EV) supporters have touted developing high-speed charging technology as the way forward for cars like Nissan Motor Co’s Leaf. But Yoshikazu Tanaka, chief engineer of Toyota’s hydrogen fuel-cell car Mirai, said that would guzzle so much energy at once as to defeat the purpose of the EV as an ecologically sound form of transportation.

“If you were to charge a car in 12 minutes for a range of 500 km (310 miles), for example, you’re probably using up electricity required to power 1,000 houses,” Tanaka told a small group of reporters at the first test-drive event for the production version of the Mirai, the world’s only mass-market fuel-cell car.

“That totally goes against the need to stabilize electricity use on the grid.”

Chinese tech major Lenovo today said almost three-fourth of its smartphone sales is coming from devices priced below Rs 10,000 [US$160].

“The industry itself sees about 75% of the sales coming from smartphones priced under Rs 10,000 and we have more or less a similar split,” Lenovo India Director Smartphones Sudhin Mathur told PTI.

The company started as a premium player but now have devices across entry, mid and premium segments, he added.

How many iPhones did Apple sell last quarter? » Fortune

BTIG’s Walter Piecyk has the low estimate (50m), independent Faizai Kara of the Braeburn Group the high (64m). The average estimate of each group — pros at 55.6m and amateurs at 59.3m — are not that far apart. Either would represent double-digit growth from the same quarter last year.

Last year’s figure was 43.7m. Apple financials are released after US market close on Monday.

A viral crusade to keep the Internet equally accessible to all users has won the backing of some of the country’s biggest online companies, which late Wednesday pulled out of a partnership with Facebook’s Internet.org over fears it could allow telecom operators to choose which web applications users can access and how fast.

India’s sophistication in this space shouldn’t be a surprise, yet it is.

The more we explored the space, the more we found that however good and interesting the hardware was in the Internet of Things, the software and service layers were generally awful. Gradually, we came to believe that huge problems in these layers were hiding all of the value and the potential of the technology.

Which brings us to Thington! We decided that we wanted to build a new user interface and service layer that would push past all these problems and in the process bring in our experience working on social systems, location sharing, privacy, hardware and the web of data. And we’re super excited by what we’ve come up with. So excited in fact that we’ve put our money where our mouths are and have formally changed the name of the company from Product Club to Thington Inc.

Keep an eye on this: Coates and colleagues have a solid track record in making useful stuff.

Knowing that the EC would issue a Statement of Objections (because it sent them to Google ahead of time), Amit Singhal, Senior Vice President, Google Search, put his name to this blogpost which aimed to show that all the EC complaints are nonsense.

And it’s Google, so it’s all going to be built on really robust data, right? Except that the blogpost has been updated at least twice:

*Update: An earlier version of this post quoted traffic figures for Bild and The Guardian, researched on a third-party site. The Guardian data were for the domain guardian.co.uk, which is no longer the main domain for the paper. We’ve removed these references and we’re sorry for the error.

That was the first. And then:

Yelp has pointed out that they get 40% of their searches (not their traffic) direct from their mobile apps. They don’t appear to disclose their traffic numbers. We’re happy to correct the record.

Did I start the ball rolling querying the numbers in Singhal’s post? Yes, I did. Someone has to ask questions of Google, and it seems all the bloggers and reporters feverishly writing hot takes didn’t.

But if those two statistics are wrong… what about all the others in Singhal’s blogpost? Guess we’ll have to look at it all in detail at some point soon.

The contract with Apple was approved by the Board of Education in June 2013 as part of a deal expected to reach at least $500m. Another $800m was earmarked to improve Internet access at schools.

Under the contract, Pearson was to provide English and math curriculum. The district selected Pearson based only on samples of curriculum — nothing more was available.

L.A. Unified made the deal anyway; it wanted to bundle the curriculum and the device into a single price. A three-year license to use the curriculum added about $200 to the $768 cost of each iPad. The entire purchase then was financed through school construction bonds, which can be used to purchase computers.

Pearson could offer only a partial curriculum during the first year of the license, which was permitted under the agreement. Teachers and principals never widely embraced the product.

Nearly a year ago, L.A. Unified sent Apple a letter demanding that it address problems with the Pearson curriculum.

“Only two schools of 69 in the Instructional Technology Initiative … use Pearson regularly,” according to an internal March report from project director Bernadette Lucas.

Seems like it’s the Pearson curriculum that’s screwed up more than the iPads, though the two also seem intertwined. The whole contract has unwound horribly.

Sexist Games=Sexist Gamers? A longitudinal study on the relationship between video game use and sexist attitudes » Abstract

Enlisting a 3 year longitudinal design, the present study assessed the relationship between video game use and sexist attitudes, using data from a representative sample of German players aged 14 and older (N=824). Controlling for age and education, it was found that sexist attitudes—measured with a brief scale assessing beliefs about gender roles in society—were not related to the amount of daily video game use or preference for specific genres for both female and male players. Implications for research on sexism in video games and cultivation effects of video games in general are discussed.

Unfortunately the study itself is paywalled, but this is the first potentially rigorous scientific study I’ve seen into the topic. So do we conclude that sexist dolts who play games would just be sexist dolts regardless? I think that’s pretty easy to answer. (Thanks to Jay Kannan for the link.)

Given enough money, all bugs are shallow » Coding Horror

Jeff Atwood on the trouble with open source and bugs (or even just code and bugs):

While I applaud any effort to make things more secure, and I completely agree that security is a battle we should be fighting on multiple fronts, both commercial and non-commercial, I am uneasy about some aspects of paying for bugs becoming the new normal. What are we incentivizing, exactly?

There’s now a price associated with exploits, and the deeper the exploit and the lesser known it is, the more incentive there is to not tell anyone about it until you can collect a major payout. So you might wait up to a year to report anything, and meanwhile this security bug is out there in the wild – who knows who else might have discovered it by then?

If your focus is the payout, who is paying more? The good guys, or the bad guys?

There is strong demand for SanDisk’s solid-state drives and memory chips.

But lower pricing, lean inventory, unplanned maintenance at its chip foundry last year and delay in sales of certain embedded parts has led to two revenue forecast cuts this year, including a warning last month.

“It looks like SanDisk is going to have pretty tough road ahead to haul in 2015,” said Wedbush Securities analyst Betsy Van Hees, adding that the company’s spending is high and will continue at “elevated levels”…

…The company had said in January it had lost a major customer, widely believed to be Apple Inc, which switched to using solid state drives made by Samsung Electronics Co Ltd in its MacBooks.

Would love to know quite how the (SD) memory chip demand is going in smartphones. Something about SanDisk’s SD business reminds me of Iomega – seemed like a great business offering consumer storage, which abruptly collapsed (when CD-Rs got cheap). SanDisk’s financials suggest the glimmerings of a fall in revenue in its “removable” business.